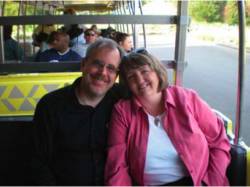 What influences, if any, does engineering have on your daily non-work life?

Engineering influences all of my daily non-work life. For example, we’ve had an annual Thanksgiving Day Rocket Launch for the last 29 years. Friends and family spend the day in the mountains and construct the rockets on the day of the launch. Retrieving lost rockets in the mountain brush is challenging. During dry seasons, we abort the launches and resort to potato guns!

GNSS Event that most signifies to you that GNSS had “arrived.”

In 1990-91, colleagues told me that parents were coming up to the gates of the Seal Beach Boeing facility to ask if they could buy a GPS receiver that would help keep their sons safe in the first Gulf War.

GPS “brownouts” — the fear that satellites will fail sooner than predicted. The GPS Standard Positioning Service performance standard requires operational 24 satellites; currently there are 35 on orbit. A dozen of those are Block IIAs, which are operating way past their design lives. But two GPS satellites have never failed at the same time, and the new Boeing Block IIF satellites will lessen the risk of brownouts even more.  The IIF satellites are more complex and accurate, and have higher power and a longer design life (12 years) than previous GPS satellites.

Karnaugh Map for C/A code taps — involving a method to simplify Boolean algebra expressions that takes up to 15 pages of analysis to describe.

“I just returned from the ION GNSS 2010 meeting in Portland, Oregon, where speakers described technologies now available that would allow a car to drive itself.  These include GPS receivers that can track in urban canyons, accurate inertial/MEMS sensors, and collision avoidance sensors. I’d like to see that!”

Czopek was in the room when a receiver successfully tracked a Block II navigation payload producing Y-code for the first time. He also led a team that found the reason why a GPS satellite would randomly go off line for 6 seconds.  This event was first noticed when a commercial jet was performing a landing under GPS control and was forced to abort. His team’s investigation resulted in changes in the control segment software that prevented this from recurring.