ABU B. KEBBIE-ANTHONY, UNIVERSITY OF MARYLAND

• Did the position dilution of precision (PDOP) values meet the GPS constellation requirements?

From our modeling and simulation, we determined the minimum OneWeb LEO constellation sizes needed to satisfy these two criteria. We did not assess how these LEO satellites would be controlled, how their timing would be synchronized, nor other details of how to make the constellation perform as a stand-alone satellite navigation constellation. Table 1 summarizes current LEO constellations.

• the percentage of time the constellation’s global PDOP value is 6 or less is greater than or equal to 98% within the service volume over any 24-hour interval, and

• the percentage of time the constellation’s worst site PDOP value is 6 or less is greater than or equal to 88% within the service volume over any 24-hour interval.” 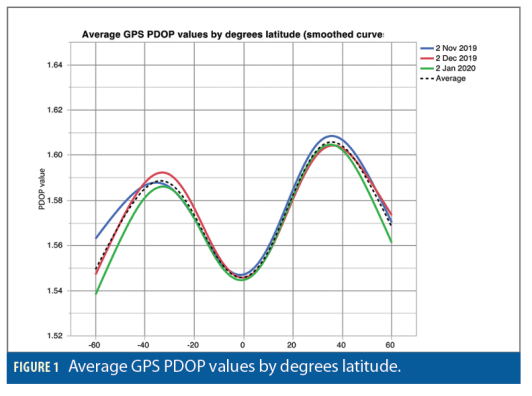 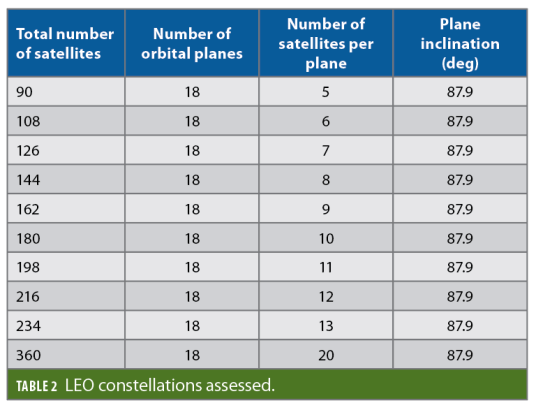 We used GIANT to create our LEO and GPS constellation models and perform the simulations. GIANT was created in 1996 to support a navigation warfare analysis of alternatives. GIANT is owned by the U.S. Department of Defense; it is a constructive, deterministic mission/engagement level modeling and simulation tool that can be used to predict the performance of a GNSS and alternative and complementary position, navigation, and timing system performance in an electronic warfare environment.

The GIANT modeling software has been continually updated and refined over the years and has been verified and validated against chamber-generated and field-collected data. GIANT is currently in use throughout the DoD by both government and industry personnel and is also used by foreign mission partners for modeling and simulation.

With GIANT, we built our LEO constellation models and performed ten simulations of each model, over a period of 109 minutes, to assess the PDOP values. We used the PDOP value as the primary performance characteristic to determine the number of LEO satellites required to provide GPS-like performance. We ran our simulation for 109 minutes instead of the normal 24-hour interval because OneWeb’s satellites complete an orbit in approximately 109 minutes versus the approximately 12 hours for GPS satellites to complete an orbit.

We collected data from 468 locations around the globe, each separated by 10° latitude and 10° longitude between 60° N latitude and 60° S latitude. The simulations were performed on January 2, 2019 starting at 12:00:00 UTC. Table 3 shows the times used to simulate the performance of OneWeb’s constellation based on its orbital periods. 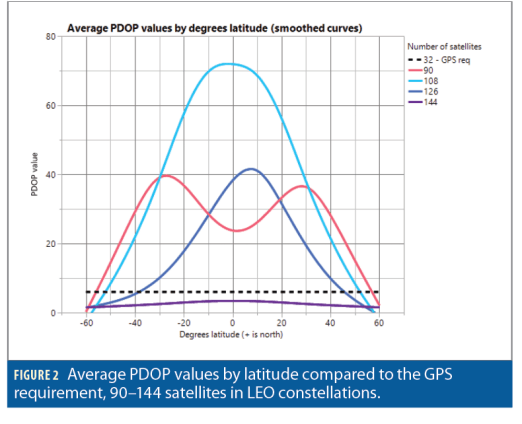 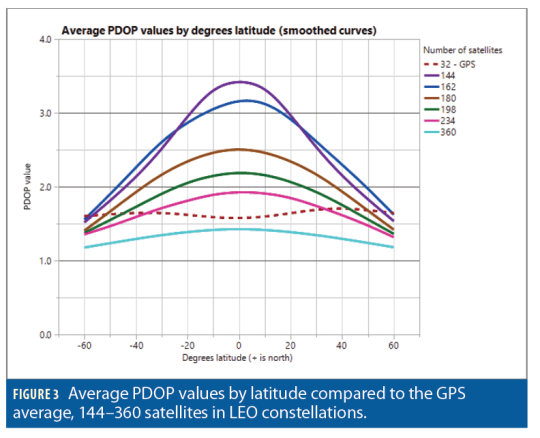 To compute the worst site, we identified one or more sites out of the 468 sites with the greatest number of PDOP values that were greater than 6. We considered these the worst sites and determined, at that site, the percent PDOP less than or equal to 6. Our results are listed in Table 4. 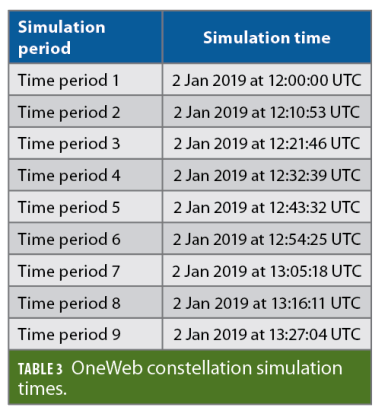 Only a LEO constellation of 360 satellites, as shown in Figure 3, satisfied our requirement that the average PDOP values, by latitude, be equal to or less than the average GPS PDOP values by latitude. Potentially constellations of 342 (19 satellites each in 18 orbital planes) and 324 (18 satellites each in 18 orbital planes) LEO satellites could also provide comparable global navigation services; unfortunately we did not model these constellations. We also determined that a LEO constellation of 234 satellites would provide comparable PDOP values—and positioning accuracy—above 30° latitude and that below 30° latitude the decrease in positioning accuracy might be acceptable to users who don’t need pinpoint accuracy of their position.

Charles F. Vaughan is an Operations Research Analyst who recently retired from the Air Force Research Laboratory. He has a Ph.D. in engineering from New Mexico State University.