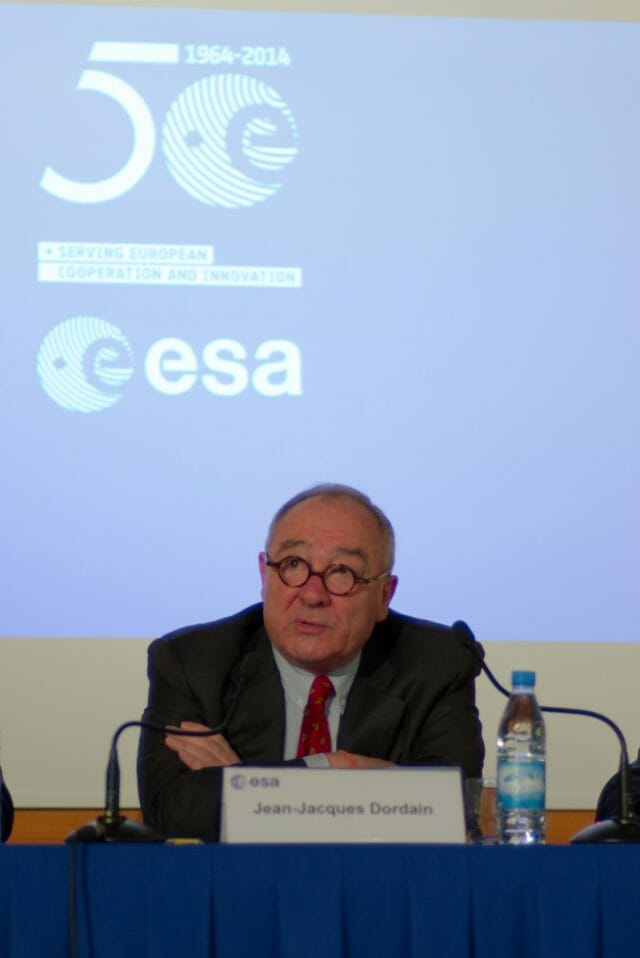 Speaking at his annual press conference in Paris last Friday (January 17, 2014), European Space Agency (ESA) Director General Jean-Jacques Dordain was cool, collected and, importantly, positive, as he laid out plans and parried questions on a whole range of ESA issues. From the Rosetta mission to manned space flights, Swarm, Gaia, Sentinel and Copernicus, and of course Galileo, he set the stage for an ambitious 2014.

Speaking at his annual press conference in Paris last Friday (January 17, 2014), European Space Agency (ESA) Director General Jean-Jacques Dordain was cool, collected and, importantly, positive, as he laid out plans and parried questions on a whole range of ESA issues. From the Rosetta mission to manned space flights, Swarm, Gaia, Sentinel and Copernicus, and of course Galileo, he set the stage for an ambitious 2014.

The director general made no excuses for ESA’s failure to proceed with scheduled Galileo satellite launches last year but was firm in announcing the agency’s new timetable to put six more operational satellites into orbit in 2014, which, he said, will allow the European GNSS Agency (GSA) to proceed with its planned delivery of early Galileo services by the end of the year.

One thing was clear when listening to his presentation: ESA is in charge of a lot more than just Galileo development and deployment, and, as the agency turns 50, Dordain is definitely in charge of its affairs.

He spoke in French; so, the citations here are translated and perhaps best considered paraphrased.

“Today’s ESA is nothing like the ESA of 25 years ago,” Dordain said. “It was simpler then, to be small and to be able to work off in one’s own little corner. We are bigger now, much bigger, and life is more complicated. We worked with the U.S. back then. Now we have agreements with Russia, Japan, and China, and with the EU [European Unioon]. We have many partners now, and a lot of problems to work through, but we can’t turn our backs. We have to work at it, and we do. The world changes and we have changed with it.”

Getting back to the subjects at hand, Dordain noted that “2013 was a big year for us, and for our partners. We achieved our major goals. Even satellites that stopped working after 10 years — GOCE [Gravity field and steady-state Ocean Circulation Explorer] and Planck [space telescope] — these still represent ongoing missions, with lots of data still to be analyzed. And we brought new contracts online; new budgets were launched.”

Big New Budget, Mainly Funded by EU
In 2014, Dordain said, launches and deployments will be the highlights — and a big, new budget framework with the European Commission [EC], bringing negotiations on new agreements. The ESA Ministerial Council, he explained, which met last December, took all the necessary decisions for a rollicking 2014.

“By far, earth observation — earth science and Copernicus [previously known as GMES or Global Monitoring for Environment and Security] — accounts for the largest part of the 2014 budget voted in December,” he said. “Next is Galileo. What these two programs demonstrate is the desire and a big effort on the part of the public sector to deliver new services to citizens.”

For Galileo, he said, the key milestones will be the long-delayed launches of the full operational capability (FOC) satellites.

“We saw some delays in the Galileo program last year,” he admitted of his own accord, “linked to certain difficulties that come up with this kind of program, but we also saw a unique event in 2013 — the validation of the four in-orbit Galileo satellites, revealing a level of precision in terms of location and timing two times better than what was called for under specifications — a scintillating demonstration!”

ESA Won’t Pay Tajani’s ‘Penalty’
Back in the fall of 2013, speaking at a special event at the European Parliament, EC Vice-President Antonio Tajani expressed dismay at ESA’s failure to launch two new Galileo satellites as planned.

“When the time comes,” Tajani said, ominously, “the penalties provided for in the contract will be enforced.”

Asked at the press conference who will pay these penalties, “Not ESA,” said Dordain. “We are not contracted with the EC. Industrial partners hold contracts, some with built-in incentives. So, the only party that could conceivably pay such a penalty would be one of the industrial parties. We cannot pay a penalty.”

Seems pretty clear that the likely industrial parties in question include British firm Surrey Satellite Technology Ltd. and the German prime contractor, OHB, both of which were implicated in the launch delay.

Yet Dordain didn’t refer specifically to either of them. “As for the postponed launches,” he said, “There were multiple causes.”

So, he didn’t answer the question of who is going to answer to the Commission.

“We are not interested in who is to blame — we want to get things done.”

The current launch schedule is as follows: the next two operational Galileo satellites are to be launched at the beginning of June 2014. Another two will follow in October, and another two in December.

With 4 operational satellites already in orbit, that will bring the total to 10 by the end of the year.

The two satellites set for the June launch are still undergoing testing, he said. The second of those will go into ESTEC’s thermal vacuum test chamber this month.

Early Services — Onus on GSA, not ESA
“We are confident that the early June launch will take place,” Dordain declared. And, he said, he believes that with 10 satellites operational by December, early Galileo services will be delivered on schedule.

However, he placed the responsibility for delivering those services on schedule squarely on the European GNSS Agency (GSA), as per the recently adopted EU GNSS regulation.

“According to the new regulation, the GSA is now officially in charge of Galileo and EGNOS operations and service delivery,” he said.

“We have already demonstrated that the four satellites currently in orbit, on their own, are capable of transmitting a signal at twice the level of precision called for under our specifications,” Dordain said.

“With two more launched in June, the GSA has indicated to us that they can already begin to ‘qualify’ the signal for early services,” he continued. “With each new satellite in orbit, the visibility of Galileo satellites in the sky increases, and precision continues to improve. With two more in October, making eight in total, they GSA can complete the qualification. With the next two in December, they should be able to deliver the early services as announced.”

Thus, ESA needs only to ensure that the satellites go up on schedule, and the ball then falls firmly in the GSA’s court. Quite honestly, sitting there listening to Dordain speak, one couldn’t help but feel reassured.

“There have been problems — there will be other problems,” he soothed. “But, I believe the GSA will deliver its early services.”

It Ain’t Easy
So, feeling suddenly much more at ease, one wonders if that purported rift between the EC and ESA has all but healed over.

With the EU now by far the biggest contributor to ESA’s budget, outside of the ESA member-states, — Copernicus and Galileo alone accounting for 15–20 percent of the budget — and recalling what he had already said about the increasing number of partners he has to work with, Dordain waxed slightly philosophical

“Cooperation is not easy,” he opined. “It is slow. EU and ESA cultures are different, but that’s not a reason not to work together. True, relations need to be more efficient and fluid than they are today; we need to work on this. Indeed, it is very important that we create this link, bringing space infrastructure into the political sphere. It makes life more complicated, but we have to do it.

“Transport, security, agriculture – all these sectors need satellites, and we need the EU to tell us what they want us to do about it,” he concluded.

To make sure this evolving relationship continues to move in the right direction, ESA will now begin discussing a new Delegation Agreement with the EC, Dordain said, to succeed the current one under which ESA acts as design and procurement agent on behalf of the commission.

“We need a new accord because we have a new budget framework for 2014–2020, for those projects that we undertake with the EU,” he said. “And we have the new EU GNSS Regulation, specifying new roles, for the GSA for example. With new activities afoot, we want to improve our working arrangements with the Commission. So all of this calls for a new Delegation Agreement.”

A first round of negotiations is scheduled for this coming March. So, we can all look forward to at least a little wrangling in 2014. And what would Galileo be without that?