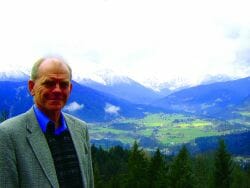 It might have been the segment from Martin Scorsese’s documentary on Bob Dylan, which I saw recently, that made me think of using this title for my comments.

More likely, however, it’s an echo from my long-gone days on the running track where any athlete worth his or her salt knows that when you come to the final stretch of the race, you shouldn’t look behind yourself.

It might have been the segment from Martin Scorsese’s documentary on Bob Dylan, which I saw recently, that made me think of using this title for my comments.

More likely, however, it’s an echo from my long-gone days on the running track where any athlete worth his or her salt knows that when you come to the final stretch of the race, you shouldn’t look behind yourself.

Don’t look back, because they might be gaining you. But, more importantly, don’t look back because it’s the easiest way to step into a hole or trip and fall on your face. The finish line or the goal isn’t behind us, it lies ahead.

So, anyway, about this likelihood of the European Union discarding the public-private partnership (PPP) concept for Galileo. People seem pretty nervous about it. Others are gleeful ready to say “I told you so.” Still others are looking for political cover.

But it’s really just business as usual and, all in all, a pretty grown-up thing to do: When one approach to getting something you really want doesn’t work out, discard it and figure out something else.

Although I was interested in seeing what differentiators might be found for Galileo, I always believed that the primary motivation for Europe’s ultimate support of the program was political — sovereignty and control issues. Great powers need great resources, not dependencies, to lead in world affairs.

After sovereignty, real and abiding reasons for Europe to support Galileo arise from more general forms of economic development: building technical competency among its citizenry and augmenting general tax revenues — in the form of fees, income, and VAT, among others.

Over the past 10 years, Europe has built a broad and admirable expertise in advanced technologies, of which satellite-based positioning, navigation, and timing require not a few. On the public side alone, more than 1,000 European citizens are engaged professionally in the Galileo project.

Although many have played it that way, Galileo was never about competition with the United States (or Russia or China for that matter). It was all about competency within GNSS — and having a GNSS of one’s own.

If you have the choice, would you really want to rely on an air traffic system or a rail or maritime traffic system that is controlled by someone else? Would you want your nation’s financial transactions and communications system to depend on some other country? And, if so, what country would that be? (I write, of course, from the comfort of living in the nation that, up to this point at least, has the only complete and long-tested GNSS in the world.)

Or consider redundancy, the need for back-up systems in the event of catastrophic systemic failure. Aren’t we all better off for having a multiplicity of sources for our GNSS technology?

The manufacturing sector and users around the world need the additional GNSS resource that Galileo represents. They need more and better signals in space to build more robust products, services, and applications — to ensure that the GNSS utility is readily available and sufficiently accurate in as many environments as possible.

The authors of the Working Papers column in the March/April issue of Inside GNSS raised an interesting question in the course of their series on a future GNSS system of systems: Are so many satellites really necessary?

They went on to conclude that we would benefit significantly by having up to 110 satellites in operation — a number that corresponds to about four GNSS constellations.

Does Europe still want to operate one of those four?

No, you can’t make a redress of grievances to the past. While there may be a few winners among the many losers in the Blame Game, I’ve never known of anyone who’s made any money at it.

So, if it comes to that, forget about PPP, and who said what about it.

Don’t look back. Look ahead.