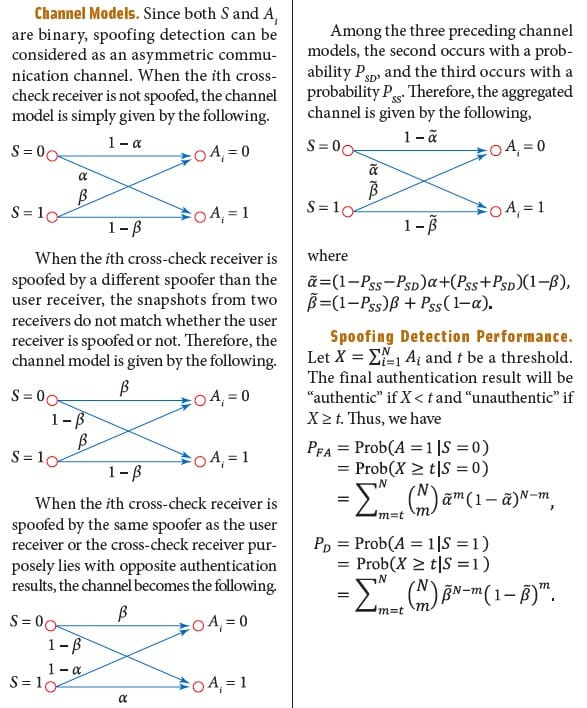 During the past two decades, the Global Positioning System, together with other GNSSes, has become an essential element of the global information infrastructure, with myriad applications in almost every facets of modern businesses and lifestyles, including communication, energy distribution, finance and insurance, and transportation. Ever-growing dependence on GNSS creates strong incentives to attack civil GNSS, for either an illegitimate advantage or a terrorism purpose.

During the past two decades, the Global Positioning System, together with other GNSSes, has become an essential element of the global information infrastructure, with myriad applications in almost every facets of modern businesses and lifestyles, including communication, energy distribution, finance and insurance, and transportation. Ever-growing dependence on GNSS creates strong incentives to attack civil GNSS, for either an illegitimate advantage or a terrorism purpose.

Unfortunately, security is not a built-in feature of GNSS open service. It has been known that low-received-power, unencrypted civil signals are vulnerable to jamming and spoofing attacks. Jamming is the intentional broadcast of a high-power “blocking” signal at the GNSS frequency. Hence, jamming is disruptive but usually detected by the receiver whenever it stops tracking satellites.

Unlike jamming, spoofing is a much more sophisticated attack. A spoofer intentionally broadcasts a counterfeit GNSS signal that overpowers the authentic signal so as to manipulate a victim receiver’s report-ed position, time, or both. Spoofing poses a greater security risk because it is deceptive and usually undetected by a Standard Positioning Service (SPS) receiver.

So far, a variety of methods have been proposed to harden civil GNSS receivers against spoofing attacks. These defensive methods can be generally categorized into three groups: external assistance, signal statistics, and cryptographic authentication. The first group performs consistency checks against metrics external to the GNSS subsystem, such as the information from inertial sensors, odometers, cellular networks, and high-stability clocks. The second group performs statistical tests on features inherent in GNSS signals, including angle of arrival, signal quality, signal power, and multipath. The third group relies on cryptographic, unpredictable information carried by GNSS signals. The Additional Resources section near the end of this article provides a list of some of the key papers and articles describing these various types of spoofing defenses.

Both NMA and SSSC require significant modifications to the legacy GPS signal structure. Consequently, they are unlikely to be implemented in the coming decade due to the static nature of GPS interface specification (IS) and long deployment cycles.

The third approach relies on codeless cross-correlation of unpredictable encrypted military P(Y) code between two civil GPS receivers. With little or even no modification to the GPS IS and the hardware of current GPS receivers, this approach is not only promising but also practical today. However, this approach in a centralized client-server approach requires dedicated reference stations at secure locations, which implies a considerable setup and maintenance cost.

This article will show that cross-correlation-based spoofing detection can be performed in a cooperative manner that incorporates information from other nearby GNSS receivers, without the requirement of high-quality, secure dedicated reference stations. The reliability arises from assistance provided by low-cost and even “unreliable” peers, which are voluntary but can be spoofed or dishonest.

Signal Authentication from Cooperative Peers
The cross-correlation spoofing detection borrows the idea from the dual-frequency GPS codeless receiver, which correlates the L1 and L2 P(Y) codes in order to find the differential delay between the phases of two codes. The spoofing detection basically correlates a snapshot of L1 signal from the receiver to be authenticated (hereinafter referred to as the “user receiver”) with a snapshot from the cross-check reference receiver; both snapshots are known to contain the same part of P(Y) code.

Although the P(Y) code is known by neither receiver and although its received version is noisy and may be distorted by a narrow-band RF front-end, a high correlation peak can still appear if neither receiver is spoofed or if both receivers are spoofed by the same spoofer. A low correlation peak appears when one of the receivers is spoofed and the other is not, or when both receivers are spoofed by different spoofers who counterfeit different P(Y) codes.

The signal authentication architecture proposed by S. Lo et alia and M. L. Psiaki et alia is in a centralized client-server approach, where each user receiver is served by a single dedicated reference receiver.

Realizing these disadvantages, in this article we propose a GNSS signal authentication architecture in an ad hoc, cooperative approach. The fundamental difference from the centralized client-server approach is that our architecture uses multiple voluntary peers (hereinafter referred to as “ad-hoc cross-check receivers” or simply “cross-check receivers”) as references.

The cooperative approach is superior to the centralized client-server approach in terms of cost, availability, user capacity, and robustness. However, one should be aware that each ad-hoc cross-check receiver is less reliable than a dedicated reference receiver. First, a mass-market GNSS receiver, especially one embedded in a smartphone, may not be as good as a dedicated geodetic-grade receiver in terms of the antenna and the signal conditioning circuit. Second, a cross-check receiver may be “dishonest” so that its authentication decision is falsified, even always opposite to the honest decision. Besides, a cross-check receiver can also be spoofed, and sometimes may be spoofed by the same spoofer if it is not sufficiently distant from the user receiver.

We shall further show in this article that our proposed approach is actually robust against these factors. In fact, the spoofing detection performance improves exponentially with the number of cross-check receivers involved in an authentication solution.

Candidate Structure of Authentication System
There are several approaches for implementing our proposed authentication system. These differ from one another mainly in where correlations are computed.

One approach is to distribute correlation computation to either cross-check receivers or a cloud service. Another option is to compute all the correlations in a centralized way, either by the user receiver itself or by a third party, which requires authentic position and/or clock information of the user receiver.

The authentication process can be performed in near real-time, and the time delay mainly depends on data collection, communication, and computation. According to M. L. Psiaki et alia, a snapshot of approximately one second is generally needed for reliable spoofing detection. A narrow-band GNSS front-end usually has a bandwidth of 2.4 megahertz, and one-second one-bit quadrature-phase samples yield 2.4 megabits of data.

Current 3G/4G cellular networks typically take one second or less to upload or download the data. The time of computation depends, but a rule of thumb is that a receiver must have the capability of processing one-second data within one second. Because the time required for sending/responding to requests and aggregating decisions is usually negligible, the authentication process can take as short as four seconds.

It is worth nothing that our cooperative authentication does not require highly reliable spoofing detection for each cross-check receiver and thus allows a much shorter snapshot to be collected. Therefore, four seconds is a very conservative estimate.

Assumptions and Notations. In order to simply the analysis, we assume that all ad-hoc cross-check receivers have the same detection performance, namely, the same probability of false alarm and the same probability of missed detection. Additionally, a cross-check receiver can be spoofed with a certain probability, and the spoofer can be the same as or different from the spoofer of the user receiver. Table 2 summarizes the notations used throughout this article.

Channel Models. Since both S and Ai are binary, spoofing detection can be considered as an asymmetric communication channel. When the ith cross-check receiver is not spoofed, the channel model is simply given by the following:

See equations in the inset photo (above right), including Spoofing Detection Performance.

From the four preceding equations, we can see that PSD only affects PFA, while PSS affects both PFA and PD. Because PSS deteriorates performance more significantly than PSD, in practice it is wise to choose cross-check receivers far from the user receiver in order to reduce PSS.

From Figure 3 we can see that for a constant PFA, PMD decreases approximately exponentially with the number of cross-check receivers. Figure 4 shows a similar behavior. Even though the probability PSS = PSD = 0.2 is overly conservative, a modest number of cross-check receivers provides a sufficiently low probability of missed detection and false alarm.

Concluding Remarks
Secure, reliable position and time information is vital for many critical civil GNSS applications. This article has presented a signal authentication architecture that relies on a network of cooperative, low-cost receivers.

This article has validated the concept through a theoretical analysis. We have assumed the cross-check receivers can be spoofed or dishonest. The analysis and numerical examples have shown that the spoofing detection performance improves exponentially with the number of cross-check receivers.