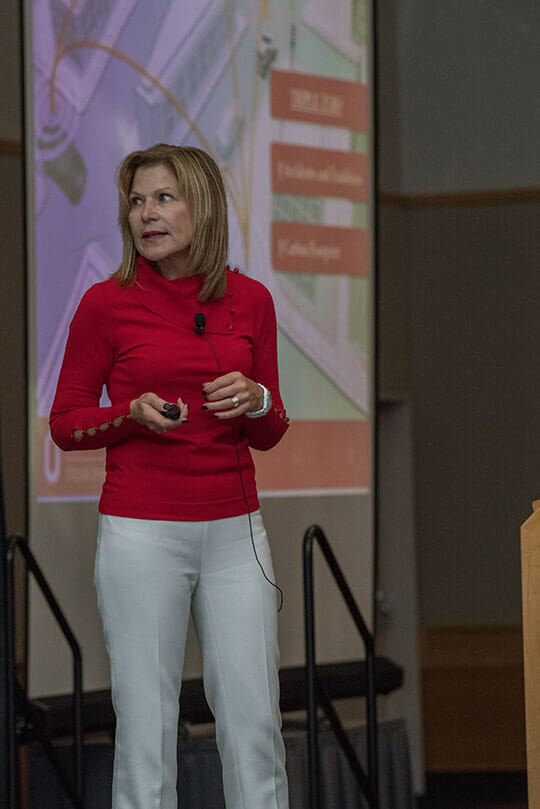 If all goes as planned, Columbus, Ohio will become one of the smarter cities around, using drones to deliver medical supplies, autonomous shuttles for college students, and a smart infrastructure that will help with buses, traffic congestion, collision avoidance for both vehicles and pedestrians, and much more.

Columbus has been awarded up to $40 million from the federal government to implement these innovative, data-driven ideas to help make transportation safer, easier and more reliable. The Department of Transportation (DoT) grant is part of the Smart City Challenge, and Smart Columbus — with a vision to reinvent mobility with a big lift from connected vehicles — competed against 77 cities across the nation before recently winning the challenge.

Carla Bailo, assistant vice president for mobility research and business development at The Ohio State University in Columbus, spoke about the program at the ION GNSS+ Plenary Session in Portland, Oregon on Sept. 26. In her presentation titled “Position, Navigation and Timing — An Enabling Technology for Mobility and Smart Cities” she addressed the importance of smart mobility with an obvious focus on safety.

“Smart mobility can save lives by reducing human error behind the wheel,” Bailo told the conference attendees, while adding that drones delivering critical supplies and medicines also would play a key role.

In winning the Smart City Challenge in 2016, Columbus was awarded $40 million from the DoT and $10 million from Vulcan, Inc., a Paul G. Allen Company, she said. Among the goals expected to come from the program are the ability to:
• Improve people’s quality of life
• Drive growth in the economy
• Provide better access to jobs and ladders of opportunity
• Become a world-class logistics leader
• Foster sustainability

Bailo said Columbus won the competition in part because it “looked at problems, looked at social inequalities and solved problems.” She added that public and private sectors are working well together and additional funding from the private sector will go a long way toward helping implement the lofty programs.

Among the projects tied to the Smart Columbus initiative are plans to put six autonomous shuttles in the commercial district, and to put in the first rapid transit system in the downtown district, with plans to have buses run every six minutes. Smart Columbus performances metrics also will be used to help with truck platooning.

Position, navigation and timing (PNT) is critical in the development of many of the programs. Bailo talked about connected vehicles helping avoid left turn accidents, and addressed the levels of automation driving for autonomous vehicles. She envisions a day when these self-driving vehicles improve traffic, save fuel, increase safety and therefore be a driving force in the success of the future’s smart cities.

The smart city of the future can not only help with collision avoidance in vehicles, but also with pedestrian collision avoidance, according to Bailo, as well as with mobility assistance for people with cognitive disabilities. Through its expertise in sensors, The Ohio State University (OSU) will play a major role in developing the initiative for a publicly available real-time traffic condition database.

The program’s grant timeline is four years and Columbus is hoping to implement some of the infrastructure in the coming months. Bailo said that “smart is just the start” and adds that one of the requirements is to teach other cities about what programs work best.
Researchers and facilities at OSU will play a central role as the collaborative Smart City team comes together under the unprecedented $140 million program (this figure includes the grants awarded along with pledges from central Ohio businesses and public organizations that have pledged an additional $90 million to the project, including $15 million from OSU) to transform Central Ohio into the nation’s premier transportation innovation region.

Collaboration between Columbus and local partners, including OSU, helped the city beat out more than 70 competitors to be named the nation’s Smart City by the U.S. Department of Transportation. The DoT announced the grant last summer in the city’s Linden neighborhood, which will see transportation upgrades under the grant.

Columbus’ application includes numerous transportation innovations, including: the expanded use of smart and electric vehicles; technology solutions to address obstacles that low-income residents face in using transportation; the development of smart corridors to improve transit service and efficiency; enhanced quality and timeliness of traffic condition data along with a routing app for trucks to improve movement and delivery of freight; and real-time information about traffic and parking conditions to minimize impacts associated with major events or incidents.

“Ohio State worked with the City of Columbus on every element of the bid,” Bailo said in an earlier press release. “We applied our leadership in research of connected and autonomous vehicles, as well as transportation systems and human behavior.”
Through its expertise in sensors, for example, OSU will play a major role in developing the initiative for a publicly available real-time traffic condition database.