Breaking Tech: Take It to the Limit One More Time - Inside GNSS - Global Navigation Satellite Systems Engineering, Policy, and Design

In 2011, NovAtel employee Andrew Levson conducted a daredevil series of experiments, fully backed by company personnel and state-of-the-art equipment at that time. The goal: to collect positioning and heading information from a two-receiver set to generate precise positioning and heading, to test the company’s ALIGN solution and explore the frontiers of possibility for dynamic applications such as marine or aviation.

“If we can make it work on the back of Andrew’s heels at 100 kilometers per hour jumping out of an airplane, it will probably work for your application,” stated a team member at the time.

Since then, GNSS-inertial integration has become the order of the day. Recently the skydiver and company returned to the air to see what further achievements new technology could log in these extremely high-dynamic, demanding conditions.

They effectively “elevated” the Wingsuit experiment by teaming with Epson, an inertial measurement unit (IMU) provider, to create an all-in-one GNSS+INS unit, the PwrPak7D-E2. This more sophisticated technology provides feedback on various types of movement that can occur while skydiving—in
particular, the human flying that Levson performs in his wingsuit prior to deploying the parachute.

As technical marketing designer Kiera Fulton said, “The first time around, we used the wingsuit to analyze the data, in order to evaluate the equipment. This time, we are using the equipment to analyze the diver’s movements, to help the skydiver understand what he did or did not do in the very rapid sequence of the jump.” This knowledge can profitably be put to use in understanding various industrial applications. 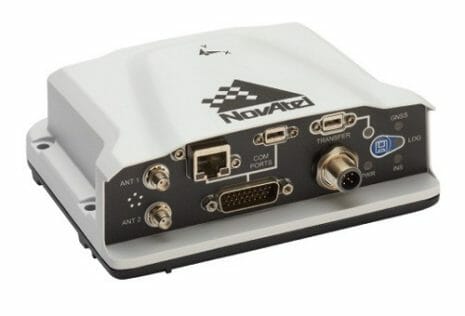 This enclosure contains a dual-antenna GNSS receiver and an Epson G370 IMU to provide the SPAN GNSS+INS and ALIGN solution. ALIGN is a firmware that generates high-accuracy heading, pitch, and positioning for high-requirement monitoring, automation and machine control. The light, compact and portable device’s internal logging functionality and 16 GB storage eliminated the need for a computer connection during skydiving flight, something that had complicated the 2011 jumps.

In the earlier experiment, pitch was indirectly observable, as heading and pitch were computed between the two receivers carried by Levson. Now, the team was able to obtain measurements not directly observable in the 2011 experiment: roll, pitch and acceleration in x, y, and z axes.

Levson wore a primary GNSS antenna on his helmet and a secondary antenna on his left heel. The PwrPak7D-E2 was securely strapped around his waist, and a 12V battery rode in a pocket.

Levson performed a number of dives during the weekend trial. For calibration, the team first tracked the “dart,” the simplest possible wingsuit jump, where the pilot does not perform any maneuvers in the flight. The dart established a baseline: the elevation values were used to determine three main elements of a skydiving jump: freefall, canopy and landing.

Since the skydiver jumps from the plane relatively close to the landing site, he cannot simply fly in a straight line. Instead, he performs a very gradual turn, to minimize the variation in IMU measurements, but still landing at the proper location.

Following the set-up dive, Levson steered in an S-shape, to see how the movements showed up in the trajectory, roll and azimuth data.

For the culmination, he performed the acrobatic maneuver known as the reverse Immelman. The skydiver—or flyer—rolls onto his back (a half barrel-roll), then arches to pitch downward, completing the loop.

Getting precise feedback on his movements and performance in this exercise constituted Levson’s personal training goal, to improve his form for later skydiving competitions. For the team, this complex, high-dynamic sequence formed the technical challenge and ultimate goal: determining how well the post-processed data could reveal intricacies of movement. 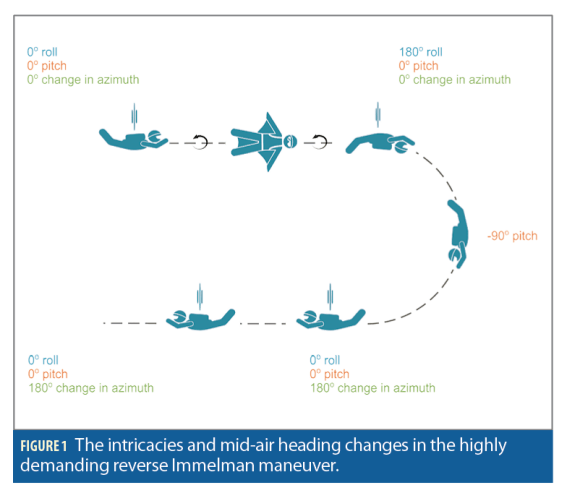 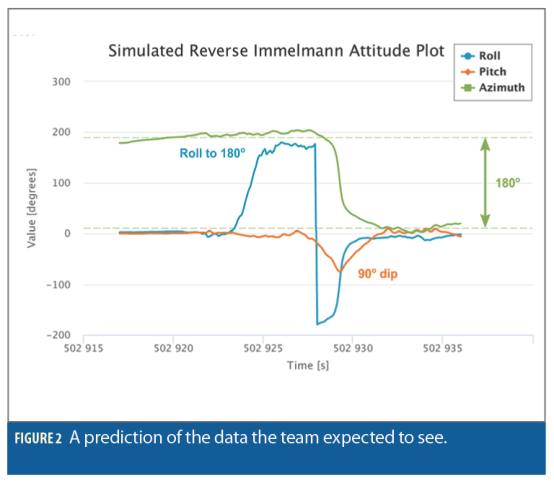 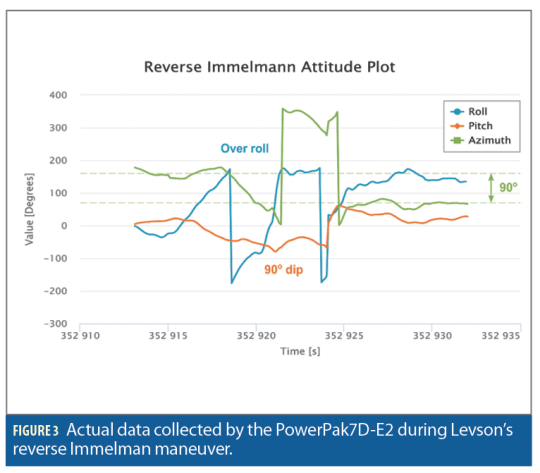 For both the S-turn and reverse Immelmann, the team had generated simulated plots at the office, prior to the jumps, to anticipate and hopefully better understand the inertial data produced by the actual wingsuit jumps.

The S-turn expectation was that roll and azimuth data would directly correlate, as the skydiver banks in order to turn. Peaks and dips happen at the same time. In reality, this turned out to be so: roll and azimuth values rose and fell jointly. In an interesting sidelight revealed by the data, a gradual change in azimuth uncovered the fact that the skydiver had experienced a crosswind.

For the highly demanding reverse Immelmann, the crew expected to see a 90-degree change in azimuth from start to finish, a.360-degree rotation in roll, and a –90 degree change in pitch, returning back up 90 degrees.

The reality differed somewhat, as in the air Levson overshot his roll, then changed direction by 90 degrees instead of 180. Still, this could be attributed to human performance, not that of the sensors. The sensors spoke true.

While human flight is an incredibly demanding environment for a GNSS receiver, tests in this environment yield valuable insights for tracking, monitoring and controlling position and orientation for a number of industrial applications.

Datasets get more difficult to analyze the shorter they are. A standard wingsuit jump with no maneuvers—the dart—yields only 2 minutes of data. Jumps with maneuvers such as the S-turn and the reverse Immelman are even shorter: the more the flyer banks, the faster he falls, cutting the airtime budget even shorter.

Finally, the collected data proved much noisier than the expected data, due to skydiving dynamics and general body wobbling. Still, the team felt amply rewarded by the experience and looks forward to taking the experiments to the next level: generating relative positions from two data sets provided by two wingsuit pilots “flying” simultaneously.

From an industrial point of view, the potential applications in machine control and precision agriculture are intriguing.

From Andrew Levson’s point of view, this could help him and his companion flyers set yet another world record: for placing more than 100 daredevils in a precise mid-air matrix (see insidegnss.com/novatel-gnss-engineer-shares-in-record-wingsuit-jump/).