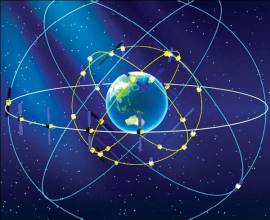 Asia is booming, and China’s BeiDou satellite navigation system seems prepped to boom right along with the growing region.

Asia is booming, and China’s BeiDou satellite navigation system seems prepped to boom right along with the growing region.

Home to more than 60% of the world’s population, Asia is the world’s fastest growing economic region — and an increasingly important GNSS market. China’s BeiDou navigation satellite system (BDS) will expand its cooperation to Thailand and Sri Lanka, and then to the entire Southeast Asia as well as countries in other regions of Asia and Africa, Wuhan Optics Valley Beidou Holding Group, the system’s operator, recently told Ecns.cn, the official English-language website of China News Service (CNS).

Ofo, one of China’s leading bicycle-sharing platforms, is using BeiDou smartlock in the Beijing-Tianjin-Hebei region to improve the accuracy of bicycle positioning. This development is just one of many new applications taking advantage of BeiDou.

The commercial application will usher in a golden opportunity during the 13th Five Year Plan (2016-20) period, driven by innovation and the China-proposed “One Belt and One Road” initiative, according to Ecns.cn, noting the market for the navigation satellite technology in China is expected to double to 400 billion yuan ($58.12 billion) by then.

China aims to serve countries along the “Belt and Road” route as well as neighboring countries by 2018, and is expected to launch another 35 satellites by 2020 to provide services to global users, according to a white paper on the development of BeiDou released by the Chinese government in June 2016. China had 23 BeiDou navigation satellites in orbit by the end of 2016, compared to GPS, which had 24 satellites.

Gaining Ground
Though BeiDou came two decades after GPS, it is catching up with the latter through advanced technological development. BeiDou adopts a hybrid constellation composed of satellites in three orbits — geostationary orbit, medium Earth orbit and inclined geosynchronization orbit. The system also provides navigation signals with several frequency points, making it more resistant to signal blockage and giving it greater accuracy, according to the white paper.

BeiDou is designed to both provide national security through its sole technologies, and be applied to several other areas such as emergency communication and fishery, said Miao Qianjun, secretary-general of the Global Navigation Satellite System and Location-based Services Association of China (GLAC).

“During the Wenchuan Earthquake that struck Southwest China’s Sichuan Province in 2008, the BDS’ short message function played an important role. It can precisely pinpoint locations during a disaster situation when there are no phone lines and telecommunication networks, as the system has satellites in geostationary orbit,” Miao told China’s Global Times.

According to reports by the China National Administration of GNSS and Applications in January, BeiDou has provided a total of 1.2 billion active location services, 6.1 billion short message services and more than 90 million two-way time services.

Growing Commercial Applications
BeiDou is expected to be applied in a wide range of industries at home and abroad by 2020, including smart transportation, deformation monitoring on large buildings, underground utilities and emergency situations.

“BDS will cover countries along the B&R route by the end of 2018 and then expand to other countries by 2020. In addition, fusion between BDS and other non-GNSS positioning technologies is expected to make new breakthroughs in location-based services,” Miao said.

China will demonstrate BeiDou’s applications and push its benefits in key sectors such as transportation, telecommunications, electric power, and survey and mapping, according to a document on national information planning during the 13th Five Year Plan period released by the Chinese government in December.

BeiDou’s precision services are widely used in the Beijing Gas Group’s gas pipeline construction, tour inspection, leak detection and emergency repair work, which facilitates the safety management of gas pipeline networks. The company has more than 20,000 kilometers of gas pipelines in Beijing and hires more than 1,000 employees to patrol and inspect them every day.

In addition to the infrastructure sector, BeiDou is prominent in the country’s automobile industry, including car manufacturing, automotive electronics and smart transportation service providers. In February, Bayingol Mongolian Autonomous Prefecture in Northwest China’s Xinjiang Uyghur Autonomous Region required all local vehicles to install BDS to safeguard stability, according to the Global Times.

Last month Inside GNSS reported on BeiDou’s significant progress in terms of its accuracy, as BeiDou engineers claimed that a new accurate positioning chip can now help users arrive at their destinations with an error margin of just one to two meters. Also, the January/February inside of Inside GNSS features a GNSS & The Law column on the “State of Play in China” that addresses Strategy, Governance, Policy, and Law of the BeiDou Navigation Satellite System.

As GNSS technology continues to evolve, it appears as if BeiDou’s role in Asia will do the same.