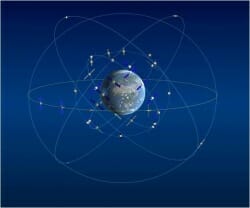 The output value of BeiDou, China’s satellite navigation and location-based service industry, increased more than 22% year on year and has topped 211 billion yuan (about 30.8 billion U.S. dollars) in 2016, according to news reports on a recently released industry white paper.

The output value of BeiDou, China’s satellite navigation and location-based service industry, increased more than 22% year on year and has topped 211 billion yuan (about 30.8 billion U.S. dollars) in 2016, according to news reports on a recently released industry white paper.

Last month Inside GNSS reported on BeiDou’s rising role and increased applications in Asia. These latest reports out of China further support the growing success of the GNSS system, and strides made both in terms of technology advances and usage.

Though BeiDou came two decades after GPS, it is showing signs of catching up with the latter through advanced technological development. BeiDou adopts a hybrid constellation composed of satellites in three orbits — geostationary orbit, medium Earth orbit and inclined geosynchronization orbit. The system also provides navigation signals with several frequency points, making it more resistant to signal blockage and giving it optimal accuracy.

BeiDou is designed to both provide national security through its sole technologies, and be applied to several other areas such as emergency communication and fishery, said Miao Qianjun, secretary-general of the GLAC, in an article in China’s Global Times. Miao explained how BeiDou’s short message function played an important role during the Wenchuan Earthquake that struck Southwest China’s Sichuan Province in 2008. The system can precisely pinpoint locations during a disaster situation when there are no phone lines and telecommunication networks because of its satellites in geostationary orbit.

Inside GNSS reported earlier that the China National Administration of GNSS and Applications stated in January that BeiDou has provided a total of 1.2 billion active location services, 6.1 billion short message services and more than 90 million two-way time services.

A key area of rapid development has come with BeiDou’s application of precision service infrastructure construction. To promote the all-round civilian application of BeiDou, the National Administration of Surveying, Mapping and Geo-information of China, in 2014, proposed the “100 cities, 100 connections, 100 applications” action plan.

According to the white paper, under the leadership of the National Geographic Information Bureau of Surveying and Mapping, the National BeiDou Precision Service Network is the core component of the “100 Cities” action plan.

In 2016 BeiDou products and services in the police and disaster prevention and mitigation market produced steady growth which will continue in 2017, according to the white paper. Also, satellite navigation and positioning functions for smartphones, and sales in the car navigation terminal market have taken off and there are no signs of a slowdown.   Additionally, the report points out that in 2016 some new large-scale applications have gradually emerged, such as electric bicycle security and bike ride-sharing programs, urban wisdom pipeline projects, and other programs described as important driving forces for economic development. As part of the “100 cities” plans, the China Satellite Navigation and Orientation Association proposed to build an “intelligent city gas pipeline network information management system” to help gas companies with safety, to provide real-time monitoring and early warning, and to reduce gas pipe network security risks.

In addition, the BeiDou precision services in water supply and drainage, urban heating and other industries have started a mature application.

Accuracy Milestone Reported
In another sign of impressive achievement for BeiDou, it was reported earlier this spring that significant progress in terms of its accuracy had been reached as engineers claimed that a new accurate positioning chip can now help users arrive at their destinations with an error margin of just one to two meters.

The release of this new chip from BeiDou made it possible to improve positioning accuracy up from 10 meters to within one to two meters, and it also allows users to distinguish the difference between a major highway and a side road.
BeiDou’s step forward on positioning accuracy shows its determination to challenge the dominance of the other three global satellite navigation systems currently in operation — GPS, Glonass, and Galileo — while also highlighting the quality of China’s research and development.