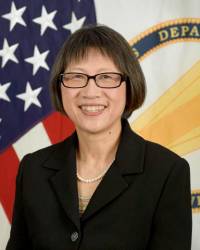 Pushed by Congress to upgrade to M-code, the U.S. Army is earmarking money for the new capability even as sequestration is forcing programs cuts, according to the service’s top acquisition official.

“We are heading towards the M-code capability,” said Heidi Shyu, assistant secretary for acquisition, logistics and technology. The Army has worked “our S&T (science and technology) pieces,” she said, noting that the Air Force was developing the necessary circuit cards through is Military GPS User Equipment (MGUE) program.

Pushed by Congress to upgrade to M-code, the U.S. Army is earmarking money for the new capability even as sequestration is forcing programs cuts, according to the service’s top acquisition official.

“We are heading towards the M-code capability,” said Heidi Shyu, assistant secretary for acquisition, logistics and technology. The Army has worked “our S&T (science and technology) pieces,” she said, noting that the Air Force was developing the necessary circuit cards through is Military GPS User Equipment (MGUE) program.

Getting the money to make the upgrades may be harder than actually developing the new cards. Sequestration, which was delayed for two years as agencies struggled to adjust, kicks in again in fiscal year 2016 (FY16).

“Every time I meet with Congress I asked them to please stop sequestration,” Shyu told reporters at the Association of the United States Army conference in Washington on Tuesday (October 14, 2014). “Unfortunately sequestration is the law of the land. And everybody I talk to says ‘Learn to live with it. Because it’s here.’"

M-code is a priority, however, and the money will be found she said.

“If you look across our portfolio we have some programs that are a little bit older — and probably don’t have the funding to help them transition towards the M-code,” she said in response to a question from Inside GNSS.  “What I am doing now is decreeing that ‘thou shalt’ put money in there to enable us to upgrade, to be capable.”

The across-the-board upgrades are happening just as NATO is sorting out compatibility issues between the militaries of its many members.

NATO has been holding exercises and, in the process, discovered that many of its systems, specifically communications systems, don’t work together.

“We have about 13 different systems for battle tracking within the nations that we work with — and all of them present challenges with talking to one another,” Maj. Gen. Walter Piatt, deputy commanding general, U.S. Army Europe, and commander, U.S. Army NATO, told Inside GNSS.

Discovering the problems now, during a training exercise and not during a crisis, is actually good news, he said.

“We would not have understood the real issues and complexities of this challenge if we had not exercised together. Before, everyone kind of conceptually understood that all we have different equipment and we may not be able to talk — but it was all kind of theory. But now since we’ve been out training together all the time and doing really tough missions we understand what the real requirements are. Now we have to agree upon a way ahead.”

“We have an exercise in December for the land component command for NATO,” Piatt said. “They have invited senior NATO members and industry from throughout the world so we can present them the challenges that we have and encourage industry to develop common solutions that are affordable for all nations.”

Though satellite navigation issues have not yet come up in the discussions, they are certainly a factor, he told Inside GNSS.

“A global positioning system is required for any of this to work,” said Piatt. “We have to know where we are in relationship to one another. It’s got to be commonly shared and it’s got to be protected — the military requirements are there. But we want that common to all. We want a solution that everyone can agree on, that’s affordable. But it also has to work — it can’t be so secure that it’s not affordable, it can be so affordable that it’s not secure.”

Shyu acknowledged that other countries might want their satellite navigation signals to be incorporated into NATO and/or coalition equipment.

Coalition partners are currently interoperable as it concerns satellite navigation, said Shyu. “If they choose in the future to become compatible with Galileo instead or some other system they design, that will be something we will have to consider how to bridge our system to be compatible with theirs.”

“Whatever solution we come up with,” said Piatt, “it’s got to be acceptable for our European partners. These are their countries, this is where we’re operating — so some of that makes sense.”

It may not, however, be necessary to choose one system over another, Piatt suggested, which could be good given that nations have already invested in systems and may not be able willing or able to spend much more.

“There may be some solutions that just make existing systems work better together,” he said. “We’re not ruling that out.”