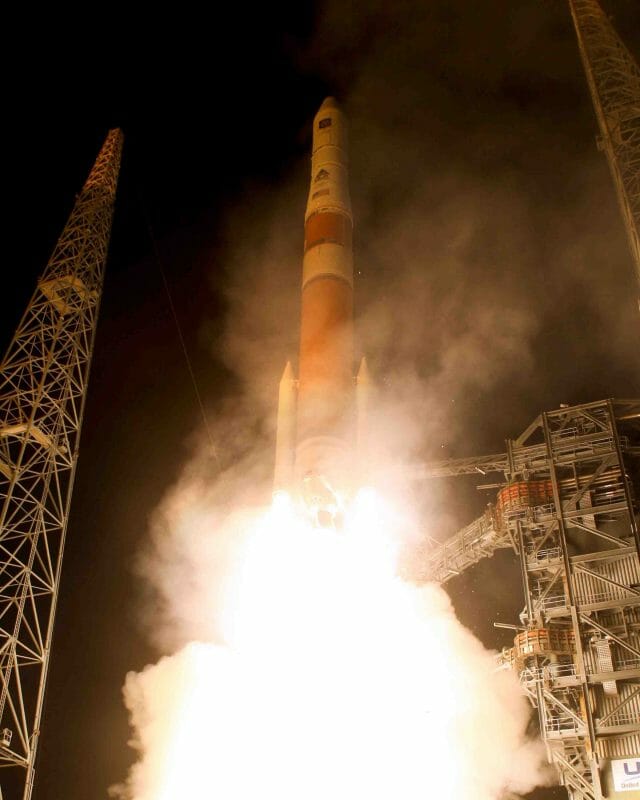 But the Air Force and Boeing Space and Intelligence Systems, which built the spacecraft, point out SVN62 is currently performing within specifications, and the signal phenomenon does not appear likely to have any significant effect on GPS positioning when the satellite is declared operational.

But the Air Force and Boeing Space and Intelligence Systems, which built the spacecraft, point out SVN62 is currently performing within specifications, and the signal phenomenon does not appear likely to have any significant effect on GPS positioning when the satellite is declared operational.

Nearing the half-way point of its 90-day checkout period, SVN 62/PRN 25, is currently broadcasting the same L1 and L2 signals as previous GPS satellites as well as the new safety-of-life signal on the L5 frequency. All three signals being broadcast from SVN 62 are set unhealthy while experts monitor the quality and characteristics of the signals and the performance of the satellite.

During the initial phase of testing, DLR researchers combined L1, L2, and L5 signals in a "tri-laning" technique used to characterize a number of known and modeled error sources from the signals. This technique of simultaneously combining the carrier phases of the three frequencies helps isolate sources of positioning errors other than the signal transmissions themselves, such as multipath (resulting from reflected signals), receiver errors, satellite-induced errors, and unmodeled phenomena.

The L1, L2, and L5 signals from SVN-62 are operating nominally but DLR noticed higher range residuals than expected (5–10 centimeters) compared to previous somewhat similar measurements at the millimeter level from Galileo’s GIOVE-A R&D satellite. According to the GPS Wing, the DLR applies a series of numerical constants the multiply the carrier phases of the three frequencies on which the signals are broadcast to produce a figure of merit, from which a calculation of the range residuals is derived.

The constants that DLR used for GPS SVN62 are slightly different than those from the first Galileo demonstration satellite. Moreover, the frequency offsets are substantially different: the GIOVE-A tri-lane measurements are made on the closely aligned E5a and E5b frequencies as well as L1, while the GPS signals are more widely distributed across the RF spectrum. Also, GIOVE-A transmits from a single "box" on the navigation payload, but SVN62 has separate boxes for each of the three signals.

"There are no issues with the GPS IIF satellite," says Ken Torok, vice president, Navigation and Communication Systems, Boeing Space and Intelligence Systems. "On-orbit checkout of the satellite . . . is progressing on schedule, and the satellite is operating in accordance with all technical specifications. The Air Force is also assisting members of the GPS user community, including Germany’s national research center, as they independently assess unspecified signal characteristics against their database of other GPS signals."

"The L1, L2 and L5 signals are meeting all performance requirements, and when the satellite is put into service in September, GPS IIF is expected to fully support the entire GPS user community," Torak added. "Boeing is pleased with the progress of the program and looks forward to delivering the new and enhanced capabilities that GPS IIF will provide."

Articles describing initial results of analyses of the IIF signals by DLR and Stanford University researchers appear in the July/August issue of Inside GNSS.

The GPS Wing at Los Angeles Air Force Base has corroborated DLR’s results and is investigating the possible root cause “to share a deeper understanding of this new signal’s behavior with the user community.”

The causes of the phase variation are still being investigated, but they are likely the result of sensitivities to changes in the satellite’s thermal environment, according to the GPS Wing. Launched May 27, SVN62/PRN25 is currently experiencing periods of both sunlight and total darkness (known as eclipse season) as the satellite orbits the Earth and traverses through Earth’s shadow.

The variations appear on six-hour intervals that coincide with the turn of the satellite toward or away from the sun. Tests to characterize the satellite’s performance during continuous sunlight exposure will continue after the current eclipse season ends later this month.

Typical GPS receivers using stand-alone (single signal – L1, L2, or L5) or combinations of L1, L2, and L5 signals as part of their navigation solution will not be affected by this small phenomenon, according to the Air Force. Higher precision users — such as surveyors, atmospheric scientists, and geodesists — typically use real-time differential techniques that eliminate such errors.

When tests of this new generation of GPS satellites have been completed and Air Force leadership gives approval, the satellite signals will be set healthy and will operate as specified in the GPS Interface Control Documents (ICDs).