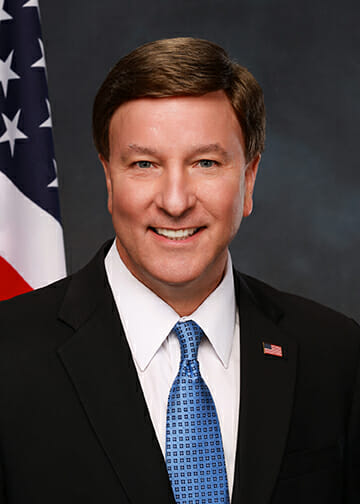 The U.S. Air Force is in a tug of war with congressional lawmakers over how military space programs will be managed going forward.

The House Armed Services Subcommittee (HASC) Chairman Mac Thornberry, R-Texas, this week threw his support behind a measure to move Space Command out from under the Air Force, placing it instead within U.S. Strategic Command (USSTRATCOM), one of the Department of Defense’s (DoD) nine unified commands.

The U.S. Air Force is in a tug of war with congressional lawmakers over how military space programs will be managed going forward.

The House Armed Services Subcommittee (HASC) Chairman Mac Thornberry, R-Texas, this week threw his support behind a measure to move Space Command out from under the Air Force, placing it instead within U.S. Strategic Command (USSTRATCOM), one of the Department of Defense’s (DoD) nine unified commands.

The language was supported by Mike Rogers, R-Alabama, the chairman of the HASC Subcommittee on Strategic Forces as part of a broad package that also would create a Space Corps within the Department of the Air Force. The Corps would be under the Secretary of the Air Force but separate from the Air Force and would have to be in place by 2019.

The changes address "significant flaws in the organization and management of the national security space enterprise," said Rogers, who criticized the service for getting “us into the situation where the Russians and the Chinese are near-peers to us in space” and for being content to allow space programs to compete for resources with other major acquisitions like the F-35.

“The Department can’t fix itself on this issue. Congress has to step in,” Rogers said in remarks opening the June 22 subcommittee markup.

The problems with the DoD’s approach to military space have been the subject of a number of high-level studies including assessments by the Rumsfeld Commission in 1998 and the Allard Commission in 2008.

Cristina Chaplain, who leads reviews of federal space and missile defense programs for the Government Accountability Office (GAO), said the military’s splintered leadership is contributing to cost overruns in space programs that are far larger than those seen in other defense procurements.

“Total acquisition costs for (DoD) space systems are about 60 percent above their first full estimates,” she told the Strategic National Security Space FY18 Budget Forum on June 16. “If I contrast for the Air Force portfolio as a whole, total acquisition costs are about 30 percent above their first estimates. That does not include the Joint Strike Fighter because we analyze that separately as a joint program. Obviously, it would change the numbers a bit.”

The challenges are such that DoD officials and experts have suggested looking at far reaching changes ranging from establishing a space acquisition agency to instituting a new military department for space, GAO reported May 17.

While acknowledging there was indeed a need for change, the Air Force, however, chose earlier this year to take a different tack from that charted by Rogers.

The week before the subcommittee finalized its work Air Force Secretary Heather Wilson signed the paperwork to create a new Space Directorate at Air Force headquarters to be piloted by a three-star general. This new deputy chief of staff, whose role was initially announced this spring, will lead the formulation, coordination, dissemination, implementation and execution of Air Force space policy, strategy and guidance, she said. “The intention is for this person to exercise oversight across the Air Force headquarter staffs so that we get uniformity and consistency of space-related requirements, planning and programming within the United States Air Force,” Wilson added.

The yet-to-be-named general, who is to have his or her initial organization stood up by August 1, will also “look at resource allocation, and analyze, assess and make recommendations to the chief and I about what the Air Force should do with respect to space,” Wilson said. “We are creating a strong senior space advocate within the United States Air Force.

In addition the Air Force is moving to an integrated command center, she told the audience at the forum, which was organized by Jacques & Associates, FiscalTrak and the Air Force Association’s Mitchell Institute for Aerospace Studies.

“Something to tell your clients,” Wilson said, “if you’re going to propose a space system in the future and it doesn’t integrate into the integrated command center, which will be an open architecture, you’re not going to win the bid, period, full stop. We must have integrated space command and control.”

Though the work of the full HASC was just getting underway as this story was going to press, it was already clear that lawmakers were unimpressed with Wilson’s choices. A summary of the final language drafted by Thornberry incorporated Rogers’ proposal to move Space Command under STRATCOM and establish the Space Corps.

“The intent,” wrote Thornberry, “is to ensure a senior military official can focus on and is responsible for training and equipping for operations in space and, likewise, for any future warfighting in this critical domain.”

The choice likely pleased Rogers, who said he was “pissed” with what he characterized as the Air Force’s resistance to change.

“To be clear, I’m willing to work with the Air Force, and the Secretary and the Chief to reform the national security space enterprise,” said Rogers in his written opening remarks. “But, at the end of the day, whether or not they’re in the room when decisions are made is their choice. But they better shape up or they’ll figure out who is in charge here. I’ll let you in on a secret: it’s the branch of our government that controls the purse strings.”