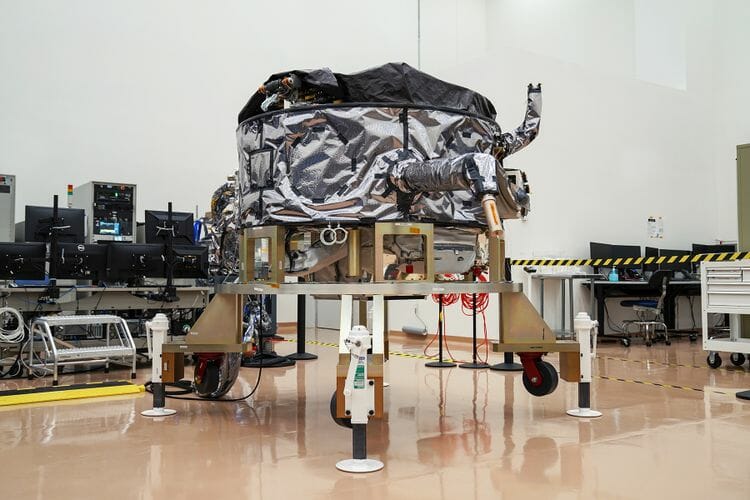 The future-oriented Navigation Technology Satellite-3 (NTS-3) spacecraft has taken one more step towards its in-space demonstration, scheduled for 2023. The satellite bus that will carry it has arrived at L3Harris Technologies of Palm Bay, Florida, delivered by Northrop Grumman Corporation.

NTS-3 will pioneer new capabilities for national defense, among them to responsively mitigate interference to position, navigation and timing (PNT) capabilities, and increase system resiliency for GPS military, civil and commercial users.

Ground integration tests of the experimental NTS-3 satellite, designed to demonstrate alternate positioning, navigation and timing capabilities to those now provided by GPS, will begin next month.

“We’re just getting into what we call the ‘end-to-end system integration’ test. We’re kicking that off in August, and then that will continue all the way through ’till we get to the launch site,” Arlen Biersgreen, AFRL’s program manager, said this week.

Following L3Harris’s work, AFRL will test the bus with the NTS-3 ground control and user equipment segments, and will perform its own integrated testing on the overall NTS-3 system architecture.

The AFRL Transformational Capabilities Office at Wright-Patterson AFB and Space Vehicles Directorate, located at Kirtland AFB in Albuquerque, N.M, are in partnership with the two industry companies for the bus development and integration.

“This is the first time an ESPAStar bus has been built and delivered as a commercially-available commodity,” said Arlen Biersgreen, the NTS-3 program manager. “NTS-3 is using a unique acquisition model for the ESPAStar line that fully exercises the commercial nature of Northrop Grumman’s product line, in order to provide the bus to another defense contractor for payload integration using standard interfaces.”

The ESPAStar-D bus is designed to use an Evolved Expendable Launch Vehicle (EELV) Secondary Payload Adapter (ESPA), allowing multiple separate experimental payloads to be stacked together on one launch vehicle.

Schramka added, “This month we took delivery of an experimental receiver known as GNSS Test Architecture (GNSSTA), developed by our sister AFRL unit, the Sensors Directorate at Wright-Patterson AFB, Ohio and Mitre Corporation. GNSSTA is a reprogrammable software defined signal receiver that allows us to receive the legacy GPS and advanced signals generated by NTS-3.”

NTS-3 will be based in Geosynchronous Orbit (GEO, some 36,000 kilometers above the Earth), rather than lower down in Medium Earth Orbit (MEO) where GPS abides. Using GEO, Biersgreen said, will demo “a hybrid space architecture, to provide augmentation essentially to the GPS constellation itself.”