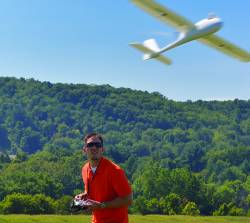 David Schmale, an associate professor in the College of Agriculture and Life Sciences at Virginia Tech uses unmanned aircraft to take samples of microbes that populate clouds.

1. The Team
The Mid-Atlantic Aviation Partnership, led by Virginia Tech, is the combined effort of Virginia, Maryland and New Jersey.

1. The Team
The Mid-Atlantic Aviation Partnership, led by Virginia Tech, is the combined effort of Virginia, Maryland and New Jersey.

Virginia Tech leads the Mid-Atlantic Aviation Partnership (MAAP), a coalition comprising Virginia, Maryland and New Jersey that is not only able to support research in unmanned aircraft but autonomous land and marine systems as well. Virginia Tech has more than a decade of experience with Unmanned Aircraft Systems (UASs), active Certificates of Authorization from the Federal Aviation Administration (FAA) and airspace at its Kentland Experimental Aerial Systems Laboratory. The school also has offers of airspace from NASA’s Langley Research Center and Wallops Flight Facility as well as $2.6 million in funding in hand from the state of Virginia.

To support the FAA, the group will focus on researching failure mode testing and the operational and technical risks specific to unmanned aircraft systems. New Jersey’s Rutgers has done a tremendous amount of research for the FAA in the past, said systems and will soon demonstrate how a UAV can work with the award-winning Robotics Assisted Bridge Inspection Tool (RABIT) to assess the underside of a bridge.

The University of Maryland brings to the team data computing expertise, airspace along the coast and a long-standing cooperative relationship with the Naval Air Warfare Center at Patuxent River. University researchers are able to tap into both the Warfare Center’s facilities and the cutting-edge research being done there, said Matt Scassero, director of the University of Maryland UAS test site, without the limits potentially facing users of other Defense Department resources. The center is a major range and test facility base, explained Scassero, and as such is encouraged to share its assets with civilian researchers—and not just the airspace “but all the infrastructure and telemetry that goes with it.”

MAAP will be able to offer unmanned aircraft as well as MAAP’s Interim Executive Director Jon Greene, and will be able to apply its extensive experience in air traffic control, modeling and airspace simulation to the challenge.

Like Virginia Tech, which has experience developing ground and marine autonomous systems, Rutgers works across all domains. The school developed the Webb Slocum glider, an underwater vehicle that collects data as it moves through the ocean by taking in and expelling water, said Tom Farris, dean of the School of Engineering. Rutgers is also working on integrating different kinds of unmanned airspace for those who, for example, need a platform to test sensors. With test locations less than an hours drive from Washington, MAAP also offers a particular advantage to those pitching ideas to the federal government, said Greene. “It would be very useful to be able to do demonstrations for your potential customers.”

“I think we have an extremely broad capability,” said Greene. “That’s what you get when you have three research universities with very close relationships with some of the primary research centers in the federal government looking at the field of unmanned aircraft.”