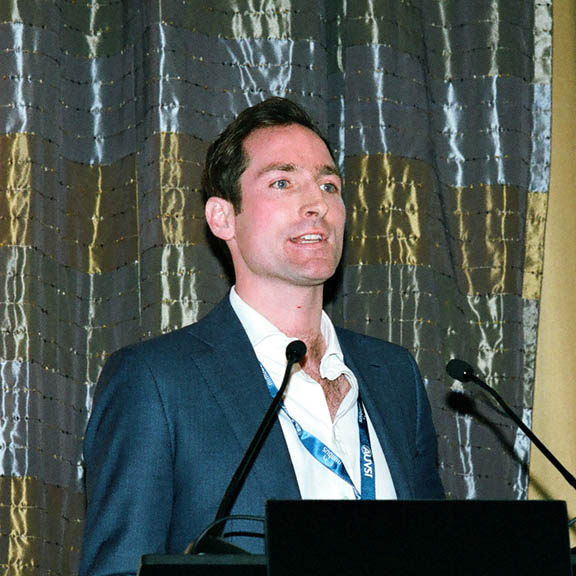 Just as you do when you get in your car, the UAS, UAV, drone, RPAS and even ROAV communities — who probably need to agree on an acronym — are beginning to take GNSS for granted. But presenters at the AUVSI Unmanned Systems Europe 2015 conference held Tuesday and Wednesday (March 3–4, 2015) in Brussels had little to say on the subject, to our great disappointment, even though virtually all of the vehicle/vessel systems under discussion use it and need it.

Just as you do when you get in your car, the UAS, UAV, drone, RPAS and even ROAV communities — who probably need to agree on an acronym — are beginning to take GNSS for granted. But presenters at the AUVSI Unmanned Systems Europe 2015 conference held Tuesday and Wednesday (March 3–4, 2015) in Brussels had little to say on the subject, to our great disappointment, even though virtually all of the vehicle/vessel systems under discussion use it and need it.

“You say to them, you see that big sprinkler system out there in that field? That’s GPS,” Bligh says. “You see the withdrawals on your bank statement? That’s GPS. You see that plane up in the sky? That’s GPS. They just don’t know.”

Probably a testament to the simple reliability of GPS, that it now underpins so much of what we do, and because it never seems to fail we have no idea it’s there.

Bligh grants, on the other hand, that “multi-GNSS” is a selling point. “Being able to tell our customers that our receivers track everything that’s up there — GPS and Galileo and the augmentation systems included — is a plus.”

But Enough about GNSS . . .
Brecht Lonneville, who works for Trimble-acquired UAV manufacturer Gatewing, says that “sales are very good in South America, Canada, and other places where they have good regulations,” but Europe is a real problem, due to the jumble of rules — or lack thereof — in the various European Union and non-EU countries.

In Belgium, where Gatewing is based, Lonneville says, “We know that people are working towards this from different directions, but right now there is just no harmonization.” So, he says, Trimble sells the UX5 Aerial Imaging Rover, and sells it very well, in places where a regulatory framework exists allowing it to do so.

The example of Belgium is instructive within the larger European context.

We reported last year that the Belgian Ministry of Transport was in the process of putting forward a proposed “Royal Decree” that would have sorted out the country’s UAV regulatory situation, but, as Jan Leyssens of Leuven-based Septentrio explains, being technically a federation, Belgium’s three “member states,” — Dutch-speaking Flanders, French-speaking Wallonia, and the tiny and officially bilingual (because no one can bear to give her up) Brussels Region — all have to negotiate, approve and pass the proposal before it can come into force.

Little Belgium Shows How It’s Done (Not)
“Belgium is like a mini-Europe,” says Leyssens. Just like the EU, “We all have to agree, but we didn’t.”

Indeed, not only did the Belgian regions not agree with the terms of the proposed decree, but they all disagreed for different reasons (and each in its own language). Meanwhile, Belgian federal elections crept up and took place, a new government came into power, out went the old transport minister and in came the new, and the proposed Royal Decree got thrown out with the bathwater.

“There will be a decree,” says Leyssens. “There is a strong public interest in a good regulation,” not least related to high-profile social issues such as safety and privacy, but also because private interests across the Belgian regions want to see a coherent framework within which they can work.

Flanders in particular is already home to a budding UAV research, training, and manufacturing community, with its own “Drone Valley” emerging around the former military airbase at Brustem near Sint Truiden. Less than 10 kilometers from Belgium’s linguistic border, the area is nestled in an region rife with agricultural production and farmers who are aching to reap the promised benefits of apped-out UAVs.

So, the Belgian UAV community is optimistic, but still waiting, and that’s only Belgium. As the meticulous BE authorities mold their new UAV Decree, they are keeping tabs on what’s going on in neighboring countries, just as those countries are watching them. But that doesn’t guarantee any level of regulatory harmony when the final product is delivered.

Meanwhile, as far as anyone knows, the EU — which does not, by the way, include all European countries — still has its “Roadmap for safe RPAS integration into the European Air System,” aimed at establishing a true European Single Market for remotely piloted aerial systems (RPAS aka drones, UAVs, and unmanned aerial systems or UAS) based on common rules.

As we have already reported, the Roadmap’s Regulatory Work Plan identifies 27 improvements to be achieved in various timeframes, running all the way to 2028. But remember, all of the now-28 EU member states – not just three as in Belgium —  have to act together. Realistically, the 2028 target looks unlikely to be met by a long shot. And where will the technology, the goal posts, have moved by then?

UAVs March On
Such questions are not theoretical. Regulations mean business. And that means jobs and societal benefits. Businessmen like Chris Blackford of Sky-Futures, which uses UAVs for industrial inspection, want to move forward.

On the issue, for example, of what is stopping Sky-Futures from deploying fully autonomous drones, which Blackford sees as the future of its business, he is clear that the main obstacles are not technical. The single greatest obstacle is the lack of coherent and harmonized regulatory frameworks in the areas where he wants to do business.

This lack of regulation in turn gives rise to another serious obstacle, that of client perception. A clear set of rules, and perhaps a widely recognized system of certification, would give Blackford’s clients a stronger sense of confidence vis-à-vis these new and still somewhat mysterious flying objects.

Others, like former fighter pilot Denis Koehl, now working within the SESAR (Single European Sky ATM Research) program, are pushing hard to see RPAS fully integrated into European airspace, but this is clearly a case where technologies are moving forward so quickly that they have already outstripped slow-moving authorities’ abilities to provide a supportive framework.

Someone needs to perk up and change the game plan, and quick.

“The genie is out of the bottle,” says Ian Davies of easyJet, now using drones to inspect for damage on lightning-struck aircraft. “We are not going back.”