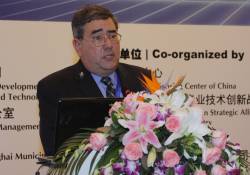 The United States brought a strong message that it is pursuing a new direction in GNSS relations with China in presentations at the recent 2010 NaviForum Shanghai.

The United States brought a strong message that it is pursuing a new direction in GNSS relations with China in presentations at the recent 2010 NaviForum Shanghai.

Until now, discussions of the subject between the two countries has taken place almost exclusively in multilateral forums, such as the United Nations-supported International Committee on GNSS, the Asia Pacific Economic Cooperation GNSS Implementation Team, and the operator-to-operator frequency coordination under the auspices of the International Telecommunications Union.

U.S. space policy has “new language and a new direction,” Russo told his Shanghai listeners, adding that “international cooperation . . . is a priority for the United States government” through both bilateral and multilateral agreements. Russo also underlined elements of President Obama’s recent National Space Policy that “foreign PNT systems may be able to strengthen the resiliency” of civil GPS services.

Russo had foreshadowed his remarks at NaviForum in an interview with NAVIBIZ, a Chinese electronic newsletter focused on the telematics industry.

“President Obama’s new National Space Policy, signed this summer, explicitly directs us to engage with foreign GNSS providers to encourage not only compatibility, but also interoperability,” Russo told NAVIBIZ in response to the question: Will the U.S. consider close cooperation with the Compass, in terms of civil and even military use?

“[The policy] also permits us to use foreign PNT [positioning, navigation, and timing] services to augment and strengthen the already robust performance of GPS,” Russo said. “The Compass system wasn’t specifically mentioned, but it wasn’t excluded either; so, the door is open to discussion on this point. Obviously there are many issues — both technical and political — to work out among the key representatives of both countries.”

Russo’s message was reinforced by another U.S. keynoter, Jeff Auerbach, an advisor on GNSS affairs for the State Department’s Office of Space and Advanced Technology. “The U.S. is interested in engaging in further bilateral discussions with China on civil GNSS services and applications,” Auerbach said.

In particular, he expressed satisfaction with progress made at the ICG-4 meeting in St. Petersburg, Russia, in September 2009 — particularly the adoption of a new principle on transparency for open services:  “Every provider should publish documentation that describes signal and system information, policies of provision and minimum levels of performance for its open services.”