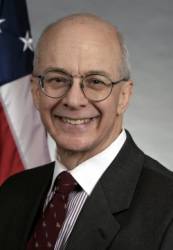 Eric L. Hirschhorn, Department of Commerce under secretary for industry and security

The U.S. government is set to ease its export rules for space-related and high-speed GPS receivers, moving many such devices out from under the stricter control of the State Department to the portfolio regulated by the Commerce Department, which already oversees the export of civil GPS receivers.

“It’s definitely a move in the right direction,” said one GPS expert.

The U.S. government is set to ease its export rules for space-related and high-speed GPS receivers, moving many such devices out from under the stricter control of the State Department to the portfolio regulated by the Commerce Department, which already oversees the export of civil GPS receivers.

“It’s definitely a move in the right direction,” said one GPS expert.

The move, scheduled to go into effect later this year, takes communications satellites and other widely available or less sensitive technology off the State Department-controlled U.S. Munitions List (USML), which is governed by the International Traffic in Arms Regulations (ITAR). Many of these items will shift to the Commerce Control List or CCL — a change that broadens export opportunities and shaves costs for U.S. companies.

“The movement of tens of thousands of U.S.-manufactured parts and components from the USML to the more flexible CCL will enable the U.S. government to make more nuanced distinctions among destinations and end-users, and apply a greater variety of authorizations, than under the ITAR,” explained Eric L. Hirschhorn, the Department of Commerce’s under secretary for industry and security in remarks to the American Association of Exporters and Importers last June.

The change eliminates the need for annual registration and fees, he noted, as well as the requirement for a multitude of authorizations.

“For small business owners,” Hirschhorn said, “the removal of registration fees will directly affect their bottom line because the law prohibits Commerce from charging licensing fees. Right now, those subject to the ITAR are required to pay a $250 fee to the State Department for an item that sells for $200. The minimum fee is $2,250 per year even if there is no export.”

The new rules, which are set to take effect November 10, are part of a broader revamping of export restrictions aimed at improving the ability of American companies to sell overseas. An Aerospace Industries Association report in 2102 said that having commercial satellites and related articles on the ITAR list cost U.S. manufacturers an estimated $21 billion in satellite revenue from 1999 to 2009 and about 9,000 direct jobs annually as the U.S.’s share of satellite manufacturing dropped from 65 percent to as low as 30 percent.

“Our national security requires reform of the export control system,” said Hirschhorn in a May 19 speech. “We need to: (1) improve our interoperability with close friends and allies; (2) strengthen the U.S. defense industrial base by reducing incentives to "design out" controlled U.S.-origin parts; and (3) focus our limited resources on the threats that matter most.”

The new provisions also ease the “see-through” rule for GPS receivers — a key change GPS experts said. As things stand, the addition of an ITAR-controlled GPS receiver to an otherwise non-ITAR system such as a commercial satellite would subject the entire system to ITAR restrictions. A note to the new rules says that incorporating the ITAR receivers described in the new rules would not put a system regulated by Commerce under ITAR regulation if the receivers are “integrated into and included as an integral part of an item” prior to export, reexport, retransfer, or temporary import.

The new rules are a long-sought change agreed those who spoke to Inside GNSS.

“The GPS industry has since its early years worked constructively with the U.S. export control and national security authorities to develop and promote policies and regulations that allow for the development of healthy markets for civilian and commercial equipment and applications while at the same time safeguarding the military utility of GPS and national security interests of the United States,” said F. Michael Swiek, the executive director, executive branch and international, of the GPS Innovation Alliance, in a prepared statement. “The recently revised export controls on GPS receiver equipment represent a constructive evolution in U.S. government policies and controls on exports of GPS receiver equipment.”

“SIA congratulates the U.S. government on this truly comprehensive overhaul to the U.S. satellite export control system,” added Patricia Cooper, president of the Satellite Industry Association in a statement. “With a more modern regulatory environment for exports in place, we look forward to unleashing the full force of American ingenuity and innovation at work in the international market.”