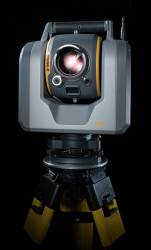 "This is the top one or two [products] we have launched in the 20 years I’ve been here," said Ron Bisio, Trimble geospatial division vice president, at a media day in Westminster, Colorado, October 5.

"This is the top one or two [products] we have launched in the 20 years I’ve been here," said Ron Bisio, Trimble geospatial division vice president, at a media day in Westminster, Colorado, October 5.

"If you are constructing a bridge in a coastal area above a body of water, you have to know the infrastructure. It all has to come together, he said. "That includes all of the land information, hydrographic areas, and impact on the structure you are putting there."

The company said SX10, with five cameras and Wi-Fi capability, can capture rich, point-cloud data at 26,600 points-per-second with a range of as much as 600 meters. The significance is surveyors can now include 3D scanning as part of everyday work projects to increase crew productivity, Trimble said.

Adoption of such new technologies as 3D scanning and unmanned aerial vehicles (UAV) have been increasing, said Todd Steiner, imaging and optical marketing director. "Most surveyors now have adopted GNSS, total stations, and software technology. Adoption of 3D scanning has been increasing," he said. "UAVs are similar in the adoption curve. It’s an expensive equipment investment and a risky [return-on-investment]. If the scanners sit on a shelf, are complex, and require a specialist to run, it makes a business ask, ‘how do I make money?’ It’s also difficult to integrate with traditional workflows as too much data is increasing office time."

Survey equipment prices may come down, but there still are personnel costs, Steiner said. "Some companies are hiring a specialist to do scanning and supplement the job they have won," he said.

Steiner said that the new SX10 precludes hiring new personnel and decreases office time because the system is familiar to most surveyors. "We talked to surveyors, SX10 works the way they do. It transforms their work without changing how they work," he said. "Surveyors who use [Trimble] total stations already know how to use SX10. Surveyors can use [SX10] to augment jobs so they don’t have to go and hire a specialist."

In terms of equipment purchases, many survey companies believe that they will save money on the front end by buying cheaper equipment, said Steaphan MacAulay, WSP Canada vice president for geomatics, mining, and industrial. "They can collect the data, but then they don’t know what to do with it," he said. "They acquire the tools and don’t know how to use them and end up hiring professionals to acquire the data they wanted in the first place."

MacAulay says a classic example of people buying low-end products, and hoping for better results, is the UAV survey market. "You can buy one on Amazon. People think they will receiver quality data from those systems and it’s a real slippery slope," he said.

WSP Canada is working the Arizona Transportation Department to survey and map road deficiencies using the SX10 system. "We are working at 45 locations in Arizona. We can find out where the road ripples are, wicked fast, with a laser scanner to millimeter-level," he said. "Older surveyors say, "I’ve done this for 30 years, why should we change?’ Then they see the technology — it’s a learning curve."

MacAulay said he used the SX10 to survey a bridge on an island in Saskatchewan. "Total time on site was about an hour, even when surveying abutment to abutment. [With normal survey equipment], you would have a crew working a full day, so you would save $1,800 to $2,000 [using SX10]," he said. "There also are safety issues, which are huge as bigger clients say accidents affect their ratings. Sometimes there is a man in a basket doing the surveying. A UAV would work, but in certain applications, they are not getting the same accuracy."

The SX10 system began worldwide beta testing in June, with customer feedback to improve the software given to the company’s developers in New Zealand, said Chris Trevillian, Trimble product manager. "Testing addressed the question, ‘what are the risks it solves?’ At the end the beta cycle, we had inputs on all of our customer’s feedback," he said.

Trevillian said surveyors can combine the SX10 with traditional Trimble R-series GNSS receivers. "SX10 can scan and collect GNSS points at the same time — and during the same job," he said.

Surveyors are diversifying into such areas as scanners, image-based mobile mapping systems and UAS platforms to enable them to provide services to new and existing customers, Trimble said.

"A couple of trends are happening. Surveying is becoming much more diversified," Bisio said. "It’s now easier to get a license and many mom and pop companies are hanging a shingle. But survey is getting very commodity-based. The oil and gas industry’s [decline] has had an impact on surveying firms across North America.

For instance, a new survey market segment was created when the Panama Canal was widened to allow larger container ships, Bisio said. "Historically, port facilities still have single-stack containers. With larger ships carrying double stacked containers, it is important to assess infrastructure," he said. "For railroads, it is important to track where tunnels are and the potential collisions."

Even when used as a supplemental tool, the SX10 system can get information quickly at crash and crime scenes, Steiner said. "The public safety market is already using Trimble total stations to look at fatality crashes to recreate the scene," he said.

Steiner said that if a survey company is going to fly a UAV and collect information to make money, unless they know how to turn that data into something customers will value, in a lot of cases it will not be valuable or profitable. "Putting $50,000 to $80,000 into 3D scanners [is not cost-effective] if a company can’t figure out how to get their money back," he said.