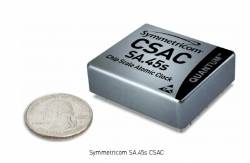 According to the company, the SA.45s CSAC offers the accuracy and stability of cesium-based atomic clock technology in a form factor that will support a range of portable applications requiring precise synchronization and time keeping in GPS-denied environments. These include use in dismounted systems to jam improvised explosive devices (IEDs), unmanned aerial vehicles (UAVs), next-generation man-pack radios, and on submersible platforms.

Integrated with a military GPS receiver, the CSAC can help provide a greatly reduced time to subsequent fix (TTSF) for 24 hours or more. With an integrated CSAC, GPS users could also operate with only three satellites in view instead of the usual four because it eliminates the need to cancel out one pseudorange in differencing computations to account for the satellite/receiver time biases — a distinct advantage in many urban and mountainous environments.

The SA.45s reportedly provides 10 megahertz and 1 pulse per second (PPS) outputs at standard CMOS levels, with short-term stability (Allan Deviation) of 2E-10 @ 1 sec, long-term aging of 3E-10/month, and frequency change over temperature of 5E-10 over an operating range of -10° C to +70° C.

Symmetricom’s SA.45s CSAC incorporates several technology breakthroughs, Fossi told Inside GNSS, which include housing the cesium atoms in a MEMS  resonance cell based on a microelectro-mechanical system (MEMS) design. He said the team building the CSAC could not get the traditional glass resonance contain small enough (two cubic millimeters) to work.

The cesium atoms are “excited,” or heated to a vapor state by a beam generated from a vertical-cavity surface emitting laser (VCSEL) that passes between upper and lower polymide heater/suspension strips. The VCSEL was designed by Sandia Labs, one of Symmetricom’s partners on the CSAC team.

The entire physics package is less than one cubic centimeter in volume and uses only 10 milliwatts of power.

Early adopters of the SA.45s include makers of underwater seismic sensors — hydrophones or geophones using time difference of arrival techniques — where the CSAC’s low power consumption and increased stability has increased mission duration. Fossi says that 80 to 90 percent of traditional sensor packages were given over to batteries needed to power the sensors, including the non-atomic timing technologies.

In military applications, the unit is targeting back-pack–mounted radios and IED jammers needed in settings with few roads such as Afghanistan, where 70 percent of all patrols move around on foot. This application require precise synchronization so that soldiers don’t jam their own communications and navigation systems, while blocking detonation signals.

Symmetricom led one of the teams competing in DARPA’s CSAC program, having to meet the milestones of each of four technology-development phases before moving on to the next.

Ultimately that paid off, Fossi says, when the company was able to commercialize the technical advances its team made without limitation after delivering the units required under its DARPA contract.

In November, Symmetricom announced that it had received a contract under the ManTech Program, funded by the U.S. Army, GPS Wing and Office of the Secretary of Defense, to sponsor enhancements to it CSAC technology. The following month, the Office of Naval Research (ONR) signed a 30-month contract with the company to sponsor further development of its Tactical Grade Atomic Clock (TGAC), designed to reduce the size of the TGAC to three cubic centimeters with an improvement in stability of 30 to 50 percent.

The SA.45s CSAC is available now with a U.S. list price starting at $1,500 in small quantities — fewer than 100. Over the next month or so, Symmetricom expects to increase production at its Beverly, Massachussetts, manufacturing facility. Until then, lead time for deliveries will be about 16 to 20 weeks, with a faster turn-around later, Fossi says.