State of Play: Resilience Is Not Just About Parts - Inside GNSS - Global Navigation Satellite Systems Engineering, Policy, and Design 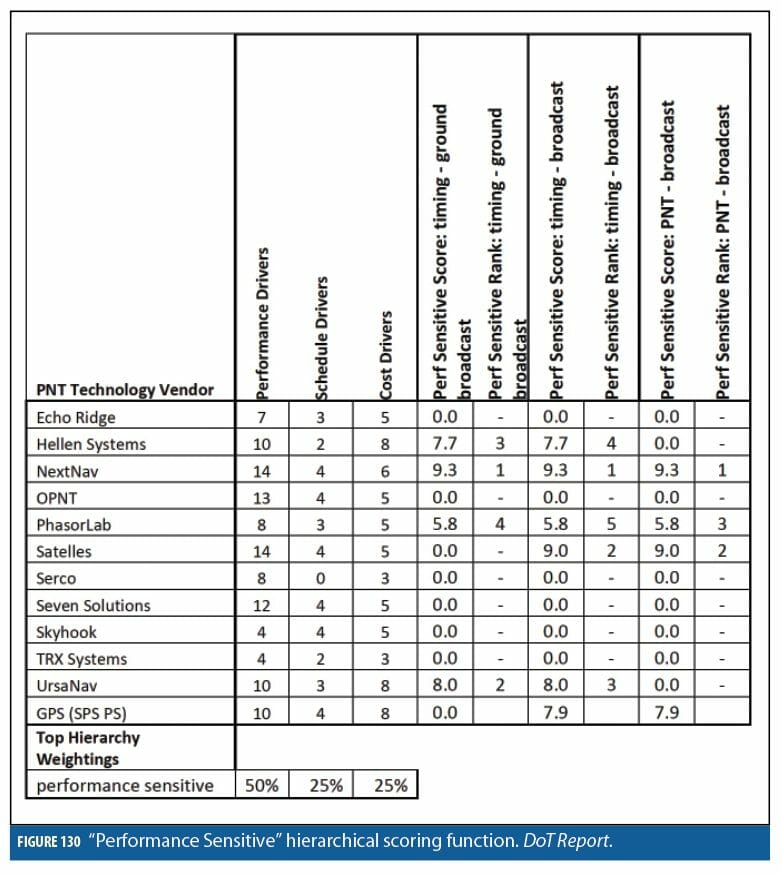 The Department of Transportation Report on complementary and backup PNT technologies has good information but paints far from a complete picture. Several candidate technologies were not demonstrated, and market factors that will form an important consideration are not discussed.

The DoT’s “Complementary PNT and GPS Backup Technologies Demonstration Report” released in January has some excellent data on the relative performances of various systems in timing and positioning.Figures 130 and 131 of the report rank the systems on “performance sensitive” and “cost sensitive” bases respectively and have received a lot of attention. While I don’t disagree with the general assessments, there is considerable hazard in applying them blindly to select a national strategy.

First, several technologies were not demonstrated, most notably 4G and 5G NR, both of which have significant and demonstrated timing and positioning capabilities independent of GNSS. Releases 16 and 17 have major thrusts into providing location and timing capabilities with strong integrity determination. As we move into smaller cell, millimeter wave (> 6 GHz) deployments for 5G NR, we can expect significant improvements in positioning accuracy.

Another contender not fully explored, in my opinion, is the 60 KHz WWVB signal that the National Institute of Standards and Technology (NIST) broadcasts continuously from Fort Collins, Colorado. The transmitted frequency of WWVB is maintained within a few parts in 1013, and time at the station site is kept within 100 nanoseconds of UTC (NIST).

And then, of course, there is the Australian company Locata’s equipment, already in wide operational use at diverse sites both indoors and outdoors around the world. Offering centimeter-level accuracies and rock-solid stability, it definitely would have been of great interest, especially since it is Technical Readiness Level (TRL) 9.

The Market Factor. A second major consideration lies in deployed availability. Until and unless a technology is fully deployed over the coverage area, you will have holes in coverage. The market will play a major role in deciding what will actually be available by deciding what it will pay for. Approaches providing wide-area coverage with relatively few assets are likely to be less expensive to deploy. That said, technologies that do more than just navigation can justify higher deployment costs.

Applicability. A third factor is domain applicability. The report partially addresses this in having diverse test environments: indoor/outdoor; stationary/moving; timing/positioning, etc., but it does not make an assessment as to whether the technology is applicable for a given class of user. Fiber optic to the cell phone might not be as cool as it sounds.

Resiliency. Finally, there is the question of resiliency. None of the technologies was tested in an adversarial environment such as jamming or cyber-attack. There is also the question of what infrastructure is needed to support the technology and how resilient that infrastructure is. Approaches that rely solely on mains service from the electric grid are not going to provide much of a backup in a natural disaster.

True resilience requires a system of systems with orthogonal vulnerabilities. The measure of an approach’s resilience is performance under attack. That is mostly a function of how well the diverse systems are integrated and how reliable the component systems are. Just having the right parts is no guarantee of performance in adversity.

There have been far too many demonstrations of how incorrect GPS position and timing results can act to drive the entire system off because of misplaced trust. In the Portland spoofing incident, authenticated time was available via cellular, good position was available via WiFi positioning, and yet most exposed phones reported they were in one of my favorite towns in France over 5,000 miles away. In this unintentional exposure test, performance was abysmal, but we learned a lot. Exposure-based testing is the only way to truly start to assess performance under adversity. 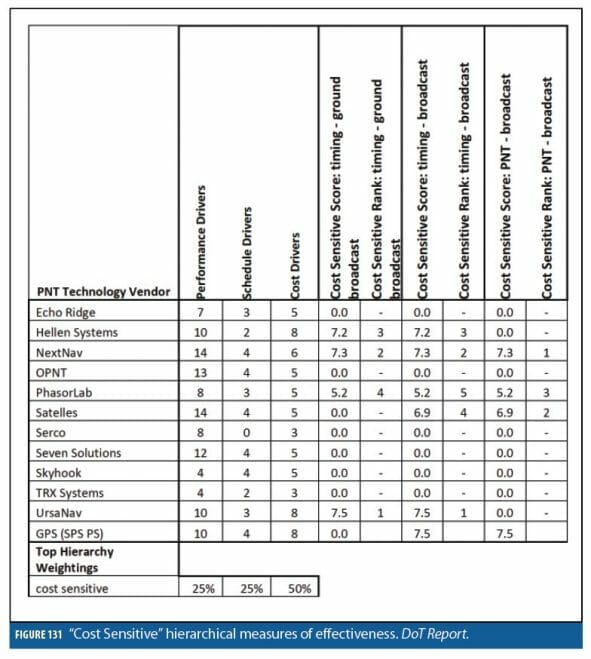 Developing situational awareness is essential: if you don’t even know that there is a problem, how can you start to solve it? There must be a continual assessment of which parts are working correctly so as to avoid accepting inputs that are invalid. It helps greatly if systems can reliably report when they are under attack and the nature of the attack (do I hear Chimera?).

Furthermore, one needs to continually assess how accurate the positioning, velocity and timing (PVT) solutions developed are within the application context and whether they are sufficiently reliable to meet the needs of the application. Resilience is not solely about hardening, it is about flexibility as well and using the tools at hand to best effect.

In closing, the DoT has provided us with an excellent report well worth reading that provides some good guidance on several technologies that could help in establishing resilient augmentations. Some (e.g. Satelles/LEO Iridium) are available now for a subscription price. Others (e.g. NextNav/928 MHz Beacons) perform extremely well but will require significant infrastructure investment, as contrasted with (UrsaNav/eLoran), which provides lesser positioning capabilities but can be deployed fairly inexpensively.

Ultimately, the choices will be made by the market providing diverse integrations, tailored to specific applications and yes, some will perform better than others.

Logan Scott is an expert consultant in systems/signal processing in advanced RF systems including GPS, RFID, navigation, communications, radar, and emitter location systems. A Fellow of the Institute of Navigation and holder of 45 US patents, he is the inventor of the Chips Message Robust Authentication (Chimera) concept for navigation signal authentication.