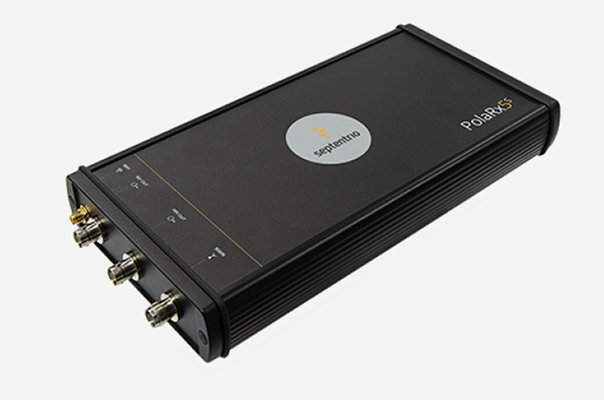 At the end of last year, the DemoGRAPE consortium observed for the first time ever, ionospheric scintillations on Galileo signals in Antarctica, using Septentrio’s PolaRx5S GNSS reference receiver.

DemoGRAPE investigates improvement of high-precision satellite positioning with a view to developing scientific and technological applications in Antarctica. The new findings were recently announced by Septentrio.

Monitoring the movement and evolution of ice shelves and glaciers as well as geodetic prospecting require highly precise positioning. Besides this scientific interest, accurate positioning is important from a safety standpoint. When visibility is limited and travel is restricted, designated routes between remote locations must be strictly followed to avoid dangers such as falling into a crevasse during a snowstorm.

Septentrio’s PolaRx5S is well suited for GNSS space weather applications. It provides data for scintillation analysis (I&Q correlations, phase, code and carrier-to-noise) at up to 100 hertz for all GNSS L-band frequencies. SBF, RINEX and BINEX data logging is possible on both a built-in 16 GB memory and on an externally connected device. Up to 24 independent data archives can be defined. Logged data can be accessed via the web UI server or automatically pushed to a FTP server.

The receivers compact and durable housing, low power consumption and open technology make it ideal for rapid and efficient integration into your existing network, according to Septentrio.

“We are really proud to have enabled our colleagues and friends from INGV and the DEMOGrape consortium to make this first of a kind scintillation measurement on the Galileo signals,” stated Dr. Bruno Bougard, Director of R&D at Septentrio. “Galileo added value on high precision application resides in its ability to increase the position availability and reliability compared to traditional GPS+GLONASS systems. Demonstrating its resilience to scintillation is key for operations at high latitudes.”