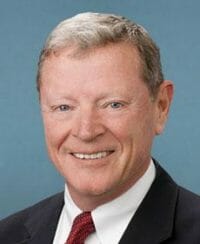 U.S. Sen. Jim Inhofe (R-Okla.), chairman of the Senate Armed Services Committee, announced that he has placed a hold on the nomination of Mike O’Rielly to a third term as Federal Communications Commision (FCC) Commissioner until O’Rielly publicly commits to vote to overturn the current Ligado Order.

“Over the past few months, I have sent letters, held hearings and called countless officials to highlight what we all know to be true: the FCC’s Ligado Order is flawed and will lead to significant harm to our military and the thousands of individuals and businesses that rely on GPS,” Inhofe stated. Then he added something not widely known. “The Trump administration understands this and has urged the FCC to reconsider the Ligado Order.”

“I am holding Commissioner O’Rielly’s nomination until he publicly states that he will vote to overturn the current Ligado Order. I understand that O’Rielly has stated that he would give ‘due consideration to a stay’ ‘based on new data or evidence’ – but that isn’t enough. This isn’t just about our military, but all users of GPS are united in opposition. All of America can’t be wrong, and he understands that. I need his commitment in plain English to vote to overturn the order, not just consider it, before I will allow his nomination to proceed.”

On April 20  the FCC granted Ligado a modification to its L-band spectrum license to allow the company to build a terrestrial 5G wireless network. O’Rielly voted to approve the modification, along with FCC Chairman Ajit Pai and fellow commissioners Brendan Carr, Jessica Rosenworcel and Geoffrey Starks. The vote was unanimous, in the face of heated opposition from the Pentagon, other government agencies and the U.S. PNT ExCom.

Inhofe’s Armed Services Committee has no jurisdiction over the FCC. The Senate Committee on Commerce, Science, and Transportation, which does oversee the FCC, has not announced any position or taken any action on the Ligado issue. Inhofe’s move, crossing chamber boundaries, is if not unprecedented at least highly unusual.

On Monday, April 20, the FCC (two days after circulating a draft internal order among Commissioners) granted Ligado a modification to their L-Band Spectrum license that will allow them to operate at a power level that testing and studies have proven causes significant interference with GPS and satellite communications. The “mitigation” strategies they’ve proposed in the order are not practical and do not provide adequate protections for such a critical system.

The order came after a broad swath of federal agencies, including the Departments of Defense, Transportation, Interior, Justice, Energy, Homeland Security, as well as the Federal Aviation Administration, Coast Guard, and NASA, continuously opposed the order in its draft form, most recently in a letter to the FCC on April 10.

On May 6, Inhofe chaired a SASC hearing, where Department of Defense officials laid out the data and analysis behind their objections to the proposal. In advance of the hearing, a broad coalition of industry stakeholders sent a letter to Inhofe and Reed expressing opposition to the FCC Order as well.

The FY21 NDAA, which passed the Senate overwhelmingly last week, includes provisions to protect critical national security equities and outlines a path forward following the Federal Communications Commission’s (FCC) misguided decision to approve Ligado Networks’ request for bandwidth for a terrestrial-based cellular network, that put critical GPS signals at risk. As our warfighters rely on these signals, the bill prohibits the use of DOD funds to comply with the FCC Order on Ligado until the Secretary of Defense submits an estimate of the costs associated with the resulting GPS interference, and directs the Secretary of Defense to contract with the National Academies of Science and Engineering for an independent technical review of the order to provide additional technical evaluation to review Ligado’s and DOD’s approaches to testing.