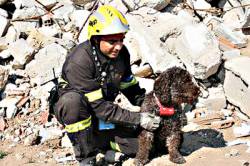 GMV’s Osmógrafo system receiver is placed on the collar of dogs working on search and rescue missions. It uses satellite positioning, wind speed and direction measurements and the dog’s own sense of smell to determine which areas have been covered by search teams. A radio on the collar stays in communication with a control station.

The innovation won the grand prize of €20,000, the special topic prize for safety-of-life application, and the regional prize for Madrid,  where GMV headquarters is located.

Founded in 2004 and also known as the Galileo Masters Awards, the European Satellite Navigation competition attracted 300 project ideas and applications this year. In addition to the grand prize, seventeen regional and eight special topics prizes were also awarded.

Winners of the special topics prizes were:

The 2010 competition will kick off on March 3-5 at the European Commission’s Charlemagne Conference Center in Brussels, Belgium.