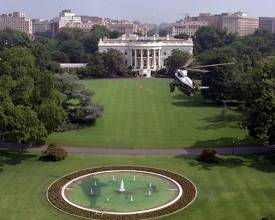 Proponents of privatizing the U.S. air traffic control system have an apparently sympathetic ear in the White House as they renew their fight to wrest air operations from the Federal Aviation Administration (FAA).

President Trump criticized the FAA’s handling of air traffic control (ATC) modernization, pointing out the ongoing issues with NextGen during a February 9 meeting with airline executives.

Proponents of privatizing the U.S. air traffic control system have an apparently sympathetic ear in the White House as they renew their fight to wrest air operations from the Federal Aviation Administration (FAA).

President Trump criticized the FAA’s handling of air traffic control (ATC) modernization, pointing out the ongoing issues with NextGen during a February 9 meeting with airline executives.

“I hear the government contracted for a system that’s the wrong system,” Trump told the execs in a clip of the meeting, citing as his source unnamed pilots. “I hear we’re spending billions and billions of dollars. It’s a system that’s totally out of whack. It’s way over budget. It’s way behind schedule. And when it’s complete, it’s not going to be a good system.”

The airline trade association Airlines for America said in a statement that it was “encouraged" by the President’s "in-depth understanding of our industry and the need to reform our air traffic control system.”

News reports made it clear, however, that the president did not commit to putting air traffic control into non-government hands. The issue is almost sure to come up this year — lawmakers must reauthorize the FAA by September 30 or face a possible shutdown. The deadline was set last summer when President Obama, with less than a day to spare, signed a stopgap extension to keep the agency operating.

Congress’ inability to reach an agreement last summer was due, in part, to a push for privatization by Rep. Bill Shuster (R-Pa), the then- and current chairman of the House Transportation and Infrastructure Committee, and Frank LoBiondo (R-N.J), who was and is the chair of its Aviation Subcommittee.

The issue was raised again, albeit indirectly, in the background memo for a February 15 hearing before House Aviation. The memo described problems with the NextGen program, which aims to update ATC by moving from ground-based navigation and surveillance systems to a satellite-based system, thereby expanding capacity and enabling the agency to absorb the ongoing growth in air traffic.

NextGen is years behind schedule, however and, according to Department of Transportation Inspector General Calvin Scovel, even more over budget. He told a February 2014 hearing that the total expenditures for NextGen likely would be two to three times greater than the initial $40 billion estimate, according to the memo.

Part of the problem is that NextGen is a complex undertaking. According to experts, however, more of the problem lies in the fact that the FAA depends on the Airport and Airway Trust Fund for support. That fund is fueled by ticket taxes and other travel related fees—so when travel declines so do the monies supporting ATC modernization.

Congressional monkeying with the agency also has not helped. This most recent extension of FAA Authorization is far from the first. When the 2012 reauthorization passed, it extended the agency’s authority for three years—but it took seven years and 23 short-term extensions to get that bill done. The legal fits and starts and the lack of reliable funding, compounded in recent years by sequestration, have hamstrung NextGen development.

SatNav Impact
ATC privatization raises serious questions about several issues related to satellite navigation including who would pay the roughly $100 million needed annually to support the Wide Area Augmentation System — money now provided by the Airport and Airway Trust Fund. There is also a question of who would fund research on air traffic control going forward. While the responsibility for spectrum issues and satellite navigation coordination would probably stay within the government, the responsibilities for those areas would need to be determined officially and coordinated going forward

Most of the airlines want to privatize ATC as a way to stabilize funding and get Congress out of the process. Opponents are worried the public may be put at risk if the FAA, which is also the United States lead for air safety, is separated from ATC operations. There are also broad concerns about the impact on service to airports in more rural areas, and questions about the changes’ impact on general aviation, and about air travel prices.

A poll conducted by Global Strategies Group found that 62 percent of voters oppose turning the air traffic control function over to a private, non-profit entity while 26 percent supported it. The poll found that 87 percent of those asked said the FAA did a good or excellent job of running the ATC system.

The results are from a phone survey of 800 registered voters nationwide conducted between January 30-February 5, 2017. Forty-two percent of those responding were from rural areas. The sampling margin of error on the survey is +/-3.5% at the 95% confidence level. The poll was sponsored by the Alliance for Aviation Across America, the League of Rural Voters, and the Air Care Alliance.