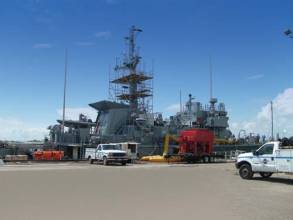 Under the Foreign Military Sales (FMS) Program the United States offers retired U.S. Navy and U.S. Coast Guard vessels to these nations’ military services. Export controls require that the vessels be sanitized of classified and sensitive material prior to the transfer.

Under the Foreign Military Sales (FMS) Program the United States offers retired U.S. Navy and U.S. Coast Guard vessels to these nations’ military services. Export controls require that the vessels be sanitized of classified and sensitive material prior to the transfer.

The AN/WRN-6 (WRN-6, for short) Satellite Signals Navigation Set is a militarized GPS navigation system used on many U.S. Navy combatant ships and submarines to provide precise and accurate geographical position information to the ship’s navigation and combat system. The WRN-6 can track up to five satellites and receive and process the L1 and L2 P/(Y) code and L1 C/A code. The navigation system is also capable of Selective Availability and antispoofing (SA/AS) operation.

However, vessels carrying the WRN-6 set may not be released to certain countries, effectively breaking the integration between the navigation and combat systems. A missing WRN-6 stops the flow of geographical information among the ship’s systems, compromising the safe navigation and the fighting capability of the ship.

Moreover, the WRN-6 incorporates an aging GPS receiver that was first designed, built, and installed on vessels beginning in the 1980s. Consequently, it has long been targeted for replacement with upgraded technology. On February 24. 1999, Vice Admiral James F. Amerault, Deputy Chief of Naval Operations (Logistics) addressed the Armed Forces House Subcommittee stating that “The WRN-6, installed in most of our ships, has no growth potential, latent defects, and does not support Navigation Warfare or electronic charting.”

The AN/WRN-7, an unclassified replacement for the WRN-6, has been installed in a limited number of FMS ships. The WRN-7 is identical to the WRN-6 with the exception of KYK input for loading P/Y-code encryption keys. It is vulnerable to the same latent defects as the WRN-6.

To maintain full operational readiness of navigation and combat systems for FMS fleets, the U.S. Navy required a functional, exportable replacement to be developed for the WRN-6 and WRN-7. This system needed to use existing shipboard cabling, mount to existing shipboard mounts, offer the same interfaces, and work across all FMS platforms. It also had to support being outfitted with either a commercial or a military GPS receiver, depending on the platform.

This article describes the development of such a WRN-6/WRN-7 replacement system by our company.

Technical Standards Challenges
Unfortunately, the WRN-6 [used in this case study] is not like a typical commercial GPS receiver. It consists of an R-2331/URN radio receiver, an AM-7314/URN antenna amplifier, an AS-3819/SRN or AS-3822/URN antenna, and a C-11702/UR indicator control.

The radio receiver features a unique U.S. Navy input/output suite. It supplies data to the navigation or combat systems via the dual MIL-STD-1397 Naval Tactical Data System (NTDS) Type A or Type B interfaces. . .

The PTTI interface has a 1 pulse per second (PPS) input, 1 PPS output, and a 1 pulse per minute (PPM) output. The unique interfaces found on the WRN-6 means that no commercial alternatives are available to replace it.

Some other U.S. Navy systems, such as the Navigation Systems Sensor Interface (NAVSSI) and the Enhanced Control Display Unit (ECDU), could possibly be integrated into the FMS fleet. However, these systems are based on a VERSA Module Eurocard (VME) chassis and are physically much larger than the WRN-6. Integrating one of these systems would be expensive and time consuming.

These systems feature the GPS VME Receiver Card (GVRC) as the sole sensor providing GPS data. The GVRC provides the Precise Positioning Service (PPS) used by NAVSSI and the ECDU to provide time and navigation data to U. S. Navy shipboard users. Like the WRN-6, the GVRC has become obsolete and does not meet some of the newer requirements for a GPS provider, such as the requirement for Selective Availability Anti-Spoofing Module (SAASM) compliance.

Our Approach
We studied the problem and arrived at a low-cost, practical solution that was implemented into a commercial product in 2007. This involved the design, development, and manufacture of an interface between an NMEA-capable GPS receiver — either commercial or military, for example, the Defense Advanced GPS Receiver (DAGR) — and the navigation and combat systems that implement the WRN-6 protocols.

This approach ensured that navigation and combat systems would receive the information they required in the format they expected, to the limits of the accuracy available in the GPS signals. As an unclassified, commercial product, our Ursa Navigator is logistically supportable for the foreseeable future, is flexible and easily integrated into a variety of different platforms, and also conforms to export control requirements.

The Ursa Navigator and its remote are based on an industry standard architecture supported by multiple vendors and GPS receiver technology. Our engineers have designed a system that emulates the basic functionality of the WRN-6 and its control indicators while supporting dual NTDS A or B channels. . .

Depending upon the selected GPS unit, enhanced positioning can be achieved through differential capability, such as that provided by the Nationwide Differential Global Positioning System (DGPS), the Federal Aviation Administration’s Wide Area Augmentation System (WAAS), the European Geostationary Navigation Overlay Service (EGNOS), or Japan’s Multi-functional Transport Satellite (MTSAT), For qualified end-users, enhanced positioning using a militarized GPS receiver such as the DAGR is also available.

The Ursa Navigator accepts NMEA 0183 input, rendering the data into the proper NTDS format. Our solution requires no changes to any aspect of existing shipboard systems. As part of “original” outfitting, the Ursa Navigator is a drop-in replacement for the WRN-6. The Ursa Navigator can also operate as a backup for existing WRN-6 equipment.

A failed WRN-6 can quickly be removed and replaced with the Ursa Navigator plus an NMEA-compliant GPS receiver. Additionally, in cases where the platform never included a WRN-6, the Ursa Navigator provides a GPS input into the combat and navigation systems.

The chassis of every Ursa Navigator has the mounts for an internal GPS receiver. The battery charger circuit card that handles power distribution has an electrical receptacle for an internal GPS power connector. The Navigator was designed to accept the U.S. Army standard embedded receiver, a Ground-Based GPS Receiver Application Module (Gb-GRAM); however, a commercial GPS receiver could be installed in the same location.

Customers can order a Ursa Navigator with the internal GPS option. All GPS receivers with selective availability/antispoofing modules (SAASMs) would have to be supplied by the customer.

(For the complete article, including figures, graphs, and additional resources, please download the PDF version at the link above.)