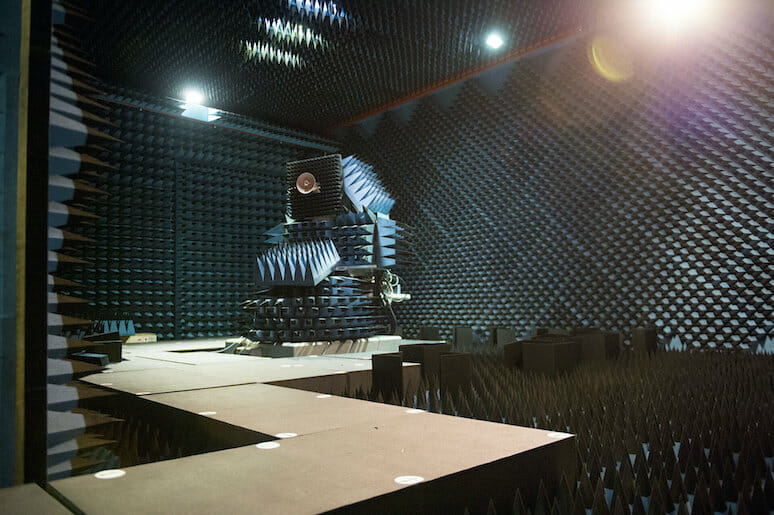 Testing of the first Galileo Second Generation (G2) hardware has begun, with versions of the satellites’ navigation payloads and antennas undergoing evaluation to check whether they meet the ambitious performance levels set for the coming generation of Europe’s GNSS. The testing by Airbus Defence and Space takes place inside a Compact Antenna Test Range (CATR) at its Ottobrunn facility in Germany, and the evaluations by by Thales Alenia Space are performed inside the Hybrid European Radio Frequency and Antenna Test Zone (Hertz) chamber at ESA’s ESTEC technical centre in the Netherlands. The metal-walled chambers isolate the hardware from external radio interference, while their inner walls, studded with foam pyramids, minimize radio frequency signal reflections, mimicking the void of space.

The Galileo Payload Testbeds (GPLTBs), development models of the navigation payloads intended for the G2  satellites, are built up from ‘breadboard’ electronic parts placed in test racks, with a proof-of-concept version of a navigation antenna attached, rather than being assembled from space-ready components like an actual satellite payload,

“The goal with these test campaigns are to prove their design concept early, and anticipate any technical issues that might arise as early as possible,” explained Cédric Magueur, ESA’s Payload Manager for the Thales G2 satellites.

“These campaigns also allow to develop and validate new performance measurements concepts for these new generation of complex navigation payloads,” added Dirk Hannes, ESA’s Payload Manager for the Airbus G2 satellites. “This will allow us to optimize the production efficiency of the Flight Model series. Results from the testing will feed into the up-coming Preliminary Design Review for the new satellites, backing up the analyses by the companies with solid measurements. Such early testing also supports the ambitious timescale for the development and construction of G2 satellites, with the first satellites planned to reach orbit by the middle of this decade.”

Next will come the first 12 G2 satellites, featuring enhanced navigation signals and fully digital payloads. The new generation will be made up of two independent families of satellites meeting the same performance requirements, produced by Thales Alenia Space in Italy and Airbus Defence and Space in Germany.

“Up until now all GPLTB testing has taken place by plugging them into test boards,” added Cédric. “These test campaigns mark the first time that their performances will be confirmed in terms of radiating signals. In our first phase we will perform near-field measurements directly around the antenna to measure all the characteristics of the signal shape, to check it matches previous conductance tests. Then via computation we can derive its far-field performance.

“In the second test phase the actual far-field measurements will be performed, using another feature of the chambers. Thanks to a pair of specially-shaped paraboloid reflectors, the signal from the testbed can be reshaped as if it has travelled the very long distance that actual Galileo signals need to stretch, all the way from an altitude of 23 222 km down to Earth’s surface.”

[Image above courtesy ESA. ESA’s Compact Antenna Test Range at its ESTEC technical centre in Noordwijk, the Netherlands. This anechoic chamber is used to test space antennas of 1 m across or less, or else entire small satellites.

The CATR is screened against external electromagnetic radiation, while their inside walls is covered with pyramid-shaped non-reflective foam to absorb signals and prevent unwanted reflections, mimicking infinite space.

In addition, a pair of wall-mounted parabolic cylindrical aluminium reflectors alter the shape of signals as they reflect them, as if they have travelled thousands of kilometres instead of a handful of metres.

The CATR is supplemented by the larger Hybrid European RF and Antenna Test Zone (HERTZ) for larger antenna or satellite testing, as well as a lab for the testing of candidate antenna materials.]