Innovative European developers use emerging GNSS-based Internet of Things technologies to create more power-efficient solutions for a range of logistics, maintenance and other applications.

Only a few years ago, observers scratched their heads as early Internet of Things (IoT) proponents suggested equipping stationary objects, even refrigerators and toasters, with connected positioning technologies. “When I first heard about it, I thought it was a joke,” confessed Thierry Torlotin, director of engineering at Syntony GNSS, headquartered in Toulouse, France. “Someone was talking about how to locate a light bulb. I thought to myself, why do I need to locate a light bulb? They don’t move!”

The IoT turned out, of course, to be no laughing matter. “After thinking about it for a while,” Torlotin said, “of course, it became clear to me.” If you can determine the location of a light bulb, for example in an overhead streetlamp, and tie a message to that location about when the bulb was installed, then you can be more proactive in your maintenance practices. You can plan just-in-time interventions and optimize the time spent by your teams in the field.

“There are many, many time-saving and money-saving applications that we can imagine of this sort,” Torlotin added, “involving the maintenance of all types of equipment and even consumer appliances.

“We are seeing a lot of demand for a means to locate transport containers. But this is not just location for location, just to know where something is. There could be a question of insurance, or there might be a payment due, based on that location, so this is what the IoT is really about. It’s about providing information that is significant for users and their businesses.” 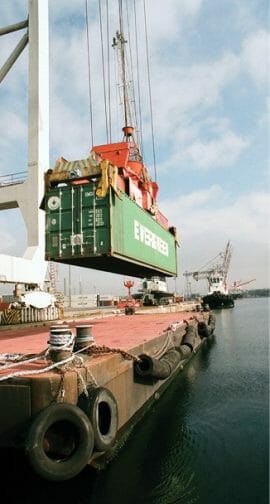 It has become clear is that real money can be made in the IoT market. Perhaps even more pertinent and potentially lucrative than maintenance-related applications are those aimed at optimizing asset management. Large industrial interests, particularly in the logistics sector, have clear and well-defined asset location and tracking needs. That spells big opportunities for suppliers who can provide practical, IoT-based solutions.

“We want to develop solutions that allow our end users, our customers, to make money,” said Samuel Ryckewaert, who heads business development and marketing for Rennes, France-based UbiScale. “That means we need to provide something cheap to buy, cheap to operate, and that needs no maintenance. We have a constraint on the size of the hardware, the tracking device, and it has to last as long as the lifetime of the asset being tracked, which might be a container. So all of these requirements lead to very strong constraints in terms of power consumption.”

GNSS has become a core tool for the IoT, but it carries that major constraint: power efficiency. “GNSS is the technology we need to use because it’s worldwide,” Torlotin said. “It’s global, and that’s nice. The problem for GNSS and the IoT is power supply, current drain.”

The European GNSS Agency (GSA), one of whose main tasks is to stimulate the development of downstream GNSS-based positioning and navigation products and services, has cited power consumption associated with GNSS positioning as a major obstacle to increasing IoT exploitation. The Agency is challenging European companies to find new low-power IoT solutions and offering substantial support for research and development towards that end.

Syntony’s GSA-funded APOLLO project is a case in point. Torlotin explained: “To track a container you first have to install a bit of hardware. We are currently attaching an object about the size of a packet of cigarettes to these containers.” This onboard module includes a battery, similar in size and shape to a smartphone battery and delivering about three amperes of current. It has a processor, front end, antenna and a communication interface.

“In the APOLLO project we’re using Sigfox as the interface. A company like DHL, for example, to do the same job without the GNSS feature, would have to use something like Cell IDs of the network to locate itself, but this might only give a position to within some kilometers. “With a GNSS-based IoT system, even with standard GNSS, we can deliver an accuracy of something like twenty meters,” said Torlotin, “and this puts you in a parking lot and able to locate a truck carrying your container.”

Ubiscale’s Ryckwaert said, “For our GSA-funded project, Galileo-of-Things, the approach has been to integrate different technologies, basically combining GNSS assistance and pseudoranges, and then adding the right connectivity, in this case NB-IoT.”

“We are really agnostic when it comes to the network,” said Torlotin. Both Syntony and Ubiscale are happy to work with a variety of network solutions, encompassing SigFox, NB-IoT, LoRa, 4G and similar.

Syntony’s IoT asset tracking system uses a combination of pseudorange and snapshot techniques. The positioning operations are not carried out by the tracker attached to the object but at a distance, in the Cloud. “The module on the container does not know where it is,” said Torlotin. “We are not actually using a GNSS chipset at all, and, in a way, this sets us apart from a lot of other IoT suppliers.

“We are already in the business of delivering high-end GNSS receivers for the transportation, aeronautics and other sectors, but when it comes to IoT applications, we are adapting our modules to perform only those tasks that are absolutely necessary, the processing that needs to be done to get a position, and we are deeply focused on understanding and controlling where the energy consumption is taking place.”

Under snapshot technique, Syntony’s APOLLO system acquires and transmits a position only once every four hours. “We are not navigating,” said Torlotin. “This is not real-time tracking, but that does not matter. A four-hour update rate is enough to satisfy this particular application.

“We started with our own software-defined radio (SDR). We sell SDR GNSS receivers, so this is something we already have in-house. From there we looked at IoT; we knew what information from the satellites we were interested in, and we decided that we could run our process on an off-the-shelf processor, an STM32 or something similar.” STM32 is a family of 32-bit microcontroller integrated circuits made by STMicroelectronics.

“From there, we use an off-the-shelf IC front-end, which is nothing compared to the cost of a chipset.” Torlotin said the APOLLO project started out with the goal of reducing by 10 the energy needed to acquire a position, compared to the cost when using a chipset. “This we have done,” he said, “and we are still continuing to improve the performance, now targeting a reduction by 20+ with a plan to reach a ratio of 100, depending on the use case.”

He pointed to similar use cases, one involving the location of airport assets, such as luggage carriers and other trailers used by ground vehicles. “Operators may want to find a particular trolley in a large airport complex,” he said, “and they may not want a lot of people spending hours looking for it. Again, you don’t need a very high update rate. It doesn’t have to be real time.”

Another use case involves truck fleet management at a harbor in Australia. “They are using this kind of system to optimize the movement of trucks,” Torlotin explained, “to ease noise pollution for the local population. Of course, every truck already has a GNSS tracker, but for security and flexibility reasons the fleet manager wants to be able to use a low-power IoT system, where the tracker is not connected to the battery of the truck.” Finally, Torlotin said, Syntony is looking at IoT-based applications to reinforce its already successful line of underground, subway-related, positioning and navigation products.

Ryckewaert said UbiScale emphasizes flexibility. “We started with a core technology that we provide as a service called Ubi-Cloud. It’s essentially based on pseudoranges, and then we add our own processing and power optimization to deliver efficient asset tracking.” Ubi-Cloud shifts a portion of power-draining GNSS and connectivity processing to the Cloud to minimize size, power consumption and the cost of trackers.

The UbiScale solution is GNSS provided by an intellectual property (IP) block that can be integrated into a chipset. “This is a piece of original software,” he said, “that enables the chipset to do GNSS processing on top of its existing functions and alongside other elements such as the NB-IoT modem. The result should be the best division of tasks between on-chip processing and Cloud services, for lowest power consumption and of course with minimum battery size and hardware cost.”

Ubiscale is also developing other kinds of IoT applications, including consumer products such as wearables. “For consumer targets, the approach may be slightly different,” said Ryckewaert. “There, you want something basically that brings more value than it creates problems. There is usually a constraint on price but also on size, with mass market consumers often wanting something smaller or even very, very small.” The technical approach really depends on the use case, he said. “In some cases, where IoT wearables serve safety and security functions, you may want to have a device that is able to report position but that can also log position. You may want a device that is able to communicate both with a public network and with a smartphone.”

The IoT is real and opportunities for developers and service providers are expanding.

Why all the attention on containers, one might ask. “It’s an important industry,” said Syntony’s Torlotin. “Just to give you an idea, for a single shipping company, potentially a single customer for an IoT solution provider, you can be looking at something like several tens of thousands of individual containers to equip and track.”

At some point, scalability may become an issue. Today’s global container fleet is likely to number somewhere between 40 and 50 million units, and that figure will surely continue to rise. Authoritative estimates show seaborne container trade accounting for about 60 percent of all world seaborne trade, with the quantity of goods carried by containers rising from about 102 million metric tons to about 1.83 billion metric tons between 1980 and 2017.