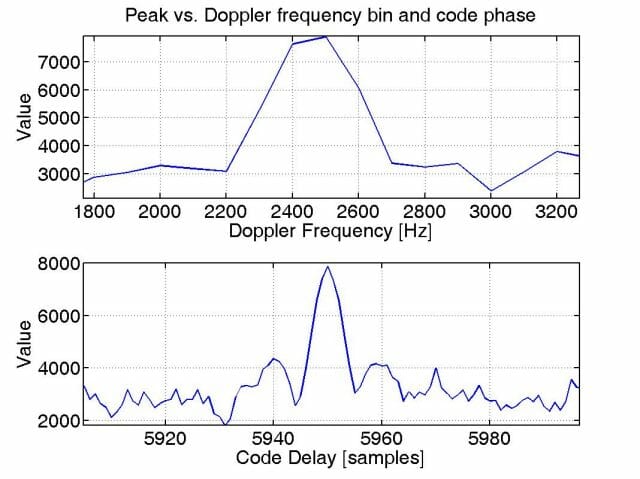 The accompanying figure shows the acquisition results of the FM3 Galileo satellite (PRN 11) E1b data channel, as computed by the NAVigation Signal Analysis and Simulation (NavSAS) group of the Politecnico di Torino/Istituto Superiore Mario Boella (ISMB) in Italy. The upper plot shows the search space along ±7 kHz Doppler frequency, while the lower one shows the search space along 4 millisecond code delay. The coherent integration time used to obtain this search space was 4 milliseconds, coupled with 11 noncoherent accumulations.

Positioning has been accomplished previously using Galileo’s GIOVE-A, GIOVE-B, and the first two IOV satellites launched in 2011, but a four IOV solution would be the first using a set of spacecraft that represent the system’s fully operational capability (FOC) satellites in most respects. The IOV satellites have comparable functionality with the FOC spacecraft being produced by Germany’s OHB-System AG, with a slightly lower broadcast power being the main difference.

Problems with the FOCs however, appear likely to delay further launches until at least nine months from now, according to sources in Europe. The problem reportedly lies in the satellite bus software used to link and control the various subsystems on the satellites, possibly including the satellite’s attitude control.

Nonetheless, the program’s success in generating full navigation signals in space — the FM3 transmitted across all three Galileo bands, E1, E5, and E6 — has elicited a renewed marketing initiative from the continent’s political leaders, including Antonio Tajani, vice-president of the European Commission (EC) who also heads the EC directorate-general responsible for industry and entrepreneurship.

“My political objective is the delivery of the first services before the end of 2014,” Tajani told a high-level conference, European Space Solutions, held December 3–5 in London, England. “I want to make it clear: we will not deviate from our roadmap. We will not make exemptions.”

An extention of the satellite-build contract signed with OHB-System earlier this year outlined a schedule of three Soyuz dual launches in 2013, followed by two more Soyuz launches and one four-satellite launch on a modified Ariane 5 rocket in 2014, which would have created an 18-satellite IOV/FOC constellation by the end of that year.

“The deployment of the constellation is important,” Tajani said. “But what is more important is creating tangible benefits for European citizens and business.”

In that context, he urged European manufacturers to incorporate Galileo capability into their products. “Industry must prepare now for these services,” he said. “The message we want to pass . . . is the following: We need to get ready!” As an adjunct activity during the conference, Tajani called for a meeting between representatives of chip manufacturers and the Galileo service.

Tajani said that at least the civil Open Service would be declared operational by the end of 2014 based on those 18 satellites. During a press conference following his speech, however, when questioned about how a launch delay might affect the declaration of service, Tajani appeared to modify his expectations, saying that an operational service could still be announced based on “12 to 18 satellites.”

In a separate interview with Inside GNSS, Carlo des Dorides, executive director of the European GNSS Agency (known by the acronym of its predecessor, the GSA), said that he expected a declaration of early service would occur by the end of 2014 based on 14 satellites in orbit, including the 4 IOVs.

Elsewhere, the Galileo program has experienced mixed fortunes recently. In the intense, three-sided negotiations (EC, European Council of heads of member states, and European Parliament) over the seven-year budget that begins in 2014, an original €7 billion (US$9.1 billion) allocation to support Galileo and the European Geostationary Navigation Overlay Service (EGNOS) has already been scaled back to around €6.3 billion or so.

Meanwhile, the companion Earth observation system, Global Monitoring for Environment and Security (GMES), will be taken back inside the core budget with support of €3.2 billion (US$4.2 billion) after an EC proposal for European Union (EU) nations to fund the program directly evoked a loud outcry from the member states.

At the recent European Space Agency (ESA) Council meeting in Naples, Italy, the European GNSS Evolution Program (EGEP) headed by Günter Hein gained backing for €118 million over the next three years, an improvement on the €100 million allocated for the previous five years. Among its most important activities in the coming years, the research & development–oriented EGEP will support design, engineering, test, and evaluation of next-generation Galileo and EGNOS satellites and ground infrastructure.

Among the notable developments is the United Kingdom’s decision to step up its overall support of ESA programs by 25 percent, including an investment of £18 million (US$29 million) for the next EGEP cycle.

A “delegation agreement” recently signed by ESA and the EC named the space agency as the “system architect” for Europe’s GNSS program, language that will likely further remove the system’s technical design from political influences (other than the ESA member states contributing to the program, of course).

Hosted by the UK Space Agency as an EC “initiative” and organized by the GSA, European Satellite Navigation Competition and GMES Master, the European Space Solutions conference and exhibition attracted more than 1,300 attendees, dominated by participants from the host country. The event was designed to bring together industry and the public sector with users and developers of space-based solutions.