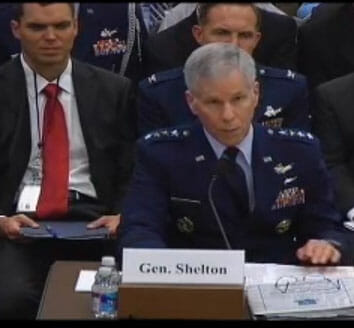 Amidst a storm of political controversy and the conspicuous absence of a key administration witness, Department of Defense (DoD) officials told members of Congress today (September 15, 2011) that a proposed broadband wireless service would degrade or render useless billions of dollars of equipment essential to military operations.

Amidst a storm of political controversy and the conspicuous absence of a key administration witness, Department of Defense (DoD) officials told members of Congress today (September 15, 2011) that a proposed broadband wireless service would degrade or render useless billions of dollars of equipment essential to military operations.

“Based on the test results and analysis to date, the LightSquared network would effectively jam vital GPS receivers,” General William L. Shelton, commander of U.S. Air Force Space Command, told the members of the House Subcommittee on Strategic Forces. “And to our knowledge thus far, there are no mitigation options that would be effective in eliminating interference to essential GPS services in the United States.”

A video recording of the hearing and the witness prepared remarks can be found on-line here.

The general’s testimony came a week after a classified briefing where the same subcommittee had been told, according to chairman Michael Turner, R-Ohio, that the impact of LightSquared’s 4G network of some 40,000 broadcast towers would be “unacceptable.”

Initial tests on a revised network launch plan from the company also showed that — even if the company operated only in the lower 10 megahertz of its two 10-megahertz bands — the effects on GPS receivers were “not acceptable,” Turner said.

White House Pressure
The White House, which is widely seen as pushing the LightSquared proposal, had reportedly tried to tone down Shelton’s earlier classified testimony. A report appearing on the Daily Beast website just hours before the second hearing commenced said the administration had sought to add language to Shelton’s testimony in support of the its plan on two key points: that the general supported White House policy to add more broadband for commercial use and that the Defense Department would “try to resolve the questions around LightSquared with testing in just 90 days.”

Those points did not appear in Shelton’s testimony today.

“Our testimony is reviewed appropriately by OSD [Office of the Secretary of Defense], then other executive branch agencies via the established OMB [Office of Management and Budget] process,” a Shelton spokeswoman told reporters. “In that process it is common to have edit exchanges and recommendations. But I can assure you General Shelton’s testimony was his own, supported by, and focused solely on, documented test results.”

Anthony Russo, director of the National Coordination Office, Space-Based Positioning, Navigation and Timing, confirmed to Inside GNSS that the review process was normal operating procedure.

Russo said that he had received similar feedback as Shelton that, in his case, came from the White House’s National Economic Council. The council, according to the White House website “coordinates policy-making for domestic and international economic issues.”

FCC MIA
One member of the Obama administration was notable for his absence. Federal Communications Commission chairman Julius Genachowski, though originally set to speak before the panel, had refused to appear, Turner said in his opening remarks to the hearing.

“I consider the chairman’s failure to show up today to be an affront to the House Armed Services Committee,” said Turner. “It appears to be symptomatic of a disregard by the chairman for the consequences of the FCC’s January 26 waiver to LightSquared.”

In response to questions from the committee Shelton said that, should a technical solution appear that would enable GPS and LightSquared to coexist, it would require thorough testing and perhaps modification to DoD’s software — and a lot of money and time.

“We have not estimated cost,” Shelton told the subcommittee, “however. I think it would be very safe to say that the cost would in the B’s — billions of dollars. We believe that the time would probably be a decade or more to accomplish all this. There are probably a million receivers out there in the military, maybe even more than that.”

The filters that are being suggested by LightSquared, he said, could undermine the precision of some receivers

“There is a set a frequencies and then there are harmonics off those frequencies. It is those harmonics . . . that are important for the precision of those wideband receivers,” Shelton explained. “Clipping off those harmonics decreases the accuracy of the receiver. If there is something else magic out there, we don’t know about it.”

Asked why DoD had not raised the alarm years earlier when the FCC was considering and approving the increases in power and numbers of broadcast towers at the center of LightSquared’s proposal, Shelton said that the threat to GPS only became clear early this year when LightSquared changed the focus of its business plan from satellite services to a terrestrial network.

“The frequency band that we’re talking about here has, by FCC rulings in the past, always been intended to be a ‘quiet neighborhood’ where GPS could coexist with other signals of the same magnitude,” the general said. “However, if you put a rock band in the middle of that neighborhood it is a very different sort of circumstance.”

In his prepared testimony, Knapp said, “I want to make absolutely clear that the Commission will not authorize LightSquared to begin commercial service if its operation would cause harmful interference to GPS.”

He later defended the general wireless broadband  initiative, but added, “At the same time, the Commission will ensure that entities such as LightSquared do not cause harmful interference to GPS systems. We will continue to work closely with the NTIA, DOD and other federal agencies to assess LightSquared’s proposal and determine the viability of technical solutions that would enable both services to co-exist.”