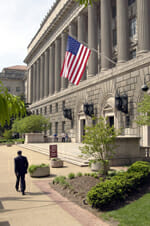 The Space-Based PNT National Coordination Office is located in the Dept. of Commerce Hoover Building

Representatives from the Federal Aviation Administration (FAA), LightSquared, and Trimble will weigh in on the GPS vs. LightSquared interference at the afternoon session of a National Space-Based Positioning, Navigation and Timing (PNT) Advisory Board meeting tomorrow (June 9, 2011).

Representatives from the Federal Aviation Administration (FAA), LightSquared, and Trimble will weigh in on the GPS vs. LightSquared interference at the afternoon session of a National Space-Based Positioning, Navigation and Timing (PNT) Advisory Board meeting tomorrow (June 9, 2011).

A panel will discuss the initial results of testing and analysis of LightSquared effects on GPS peformed by the National PNT Engineering Forum (NPEF) beginning at 1 p.m. (Eastern time) in rooms V and VI of the Sheraton Crystal City Hotel, 1800 Jefferson Davis Highway, Arlington, Virginia. The meeting is open to the public.

The NPEF is a federally chartered group reporting to the National Coordination Office (NCO) for Space-Based PNT that addresses serious GPS technology and coordination issues. In recent weeks the NPEF has overseen a series of tests separate from the working group set up by the Federal Communications Commission (FCC) as part of its process for allowing LightSquared to build a national network of cellular broadband base stations that would transmit high-powered signals in an RF band adjacent to the GPS L1 frequency.

A final report on the NPEF tests was due to the NCO on May 31 that detailed the broadband system’s effects on GPS and potential mitigation options for interoperability between the systems as well as field measurements from the LightSquared ATC stations and mobile handsets and an analysis of representative GPS receiver performance.

Frazier will present initial results from interference testing undertaken by the RTCA Inc. Special Committee 159 on GPS. The RTCA report was released on May 27 and indicated that GPS aviation receivers would experience serious interference from transmission planned by LightSquared in the upper portion of the 1525–1559 MHz band.

During the morning of June 9, Michael Bergman, head of PNT Programs for the Department of Homeland Security, will discuss aspects of the U.S. Interference Detection & Mitigation Plan, including Patriot Watch and critical infrastructure protection. The full agenda for the day and a half advisory board meeting can be found on the NCO website.

The federal National Space-Based PNT (Positioning, Navigation and Timing) Advisory Board consists of GNSS experts outside the United States government who meet at least twice a year to advise the departments of state, defense, homeland security, and others about GPS and related satellite navigation systems.