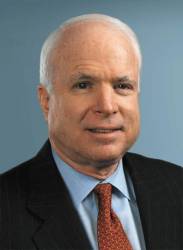 If approved, legislation halting the use of a Russian rocket engine could force delays in the launch of U.S. military satellites, including, potentially, GPS III spacecraft planned for launch beginning next year.

The bill, introduced this week by Sen. John McCain R-Arizona, the chairman of the Senate Armed Services Committee, and House Majority Leader Kevin McCarthy, R-California, would ban the use of Russian RD-180 rocket engines for the evolved expendable launch vehicle program (EELV).

If approved, legislation halting the use of a Russian rocket engine could force delays in the launch of U.S. military satellites, including, potentially, GPS III spacecraft planned for launch beginning next year.

The bill, introduced this week by Sen. John McCain R-Arizona, the chairman of the Senate Armed Services Committee, and House Majority Leader Kevin McCarthy, R-California, would ban the use of Russian RD-180 rocket engines for the evolved expendable launch vehicle program (EELV).

The Atlas V, which launched GPS satellites previously and will be used next week for the GPS IIF-12 mission, is part of the EELV program.  United Launch Alliance (ULA), however, declined to bid on a GPS launch last fall, in part because of restrictions on the RD-180 in place at the time.

"Under the restrictions imposed by the 2015 National Defense Authorization Act (NDAA)," the company said in a statement, "ULA does not currently have any Atlas engines available to bid and therefore is unable to submit a timely proposal."

A provision in the Fiscal Year 2016 Omnibus Appropriations Bill signed into law in December effectively removed those limits. McCain is vehemently opposed to the use of the RD-180, which he considers a strategic risk and a form of financial support for Russian oligarchs.

"Today Russia holds many of our most precious national security satellites at risk before they ever get off the ground. Yet the Department of Defense has actively sought to undermine — with the support of United Launch Alliance (ULA) and the parochial motivations of Senator Shelby and Senator Durbin — the direction of this committee to limit that risk and end the use of the Russian made RD-180 by the end of this decade," McCain said in remarks opening a Jan. 26 hearing of the Senate Armed Services Committee.

“My views on this matter are well known,” he added. “The benefits to Vladimir Putin, his network of corruption, and the Russian military industrial complex are also well known. Yet despite the availability of alternatives, a select few still want to prolong our dependence on Russia while they target our satellites, occupy Crimea, destabilize Ukraine, bolster Assad in Syria, send weapons to Iran, and violate the 1987 Intermediate Range Nuclear Forces Treaty."

Frank Kendall, the under secretary of defense for Acquisition, Technology and Logistics, said that if the Department of Defense had to stop using the RD 180 engine immediately it could trigger tens of millions to hundreds of millions of dollars in extra costs and potentially long delays.

"At the end of the day,” Kendall said during the hearing, "the Department of Defense will do whatever the law directs us to do. If we are directed to get off the RD 180 today we will do that, and we will do the best that we can without it — but there are costs associated with that."

There are other launch vehicles available to loft Defense Department payloads — specifically the Delta IV and the newly certified Falcon 9, which is built by SpaceX.

Even so, said Secretary of the Air Force Deborah James, a shift away from the RD-180 to the Delta IV and the Falcon 9 could ripple through the schedule.

The potential delays are "a detail that we would have to think through carefully if we were to make the decision to stop all RD-180s and shift to have Delta on the one hand and SpaceX on the other," James told lawmakers.

An expert familiar with both the GPS program and the overall military launch program said stopping use of the RD-180 could potentially affect the GPS program, depending on what the halt did to the schedule. The source, who requested anonymity to be able to speak freely, said that a compromise was more likely than an immediate ban.

"I really believe that the compromise that will come out [will be to] end the purchases [of the engines] but go ahead and be able to fly whatever RD-180s you have.”

Kendall said it would be several years before the DoD could have a certified replacement for the RD-180. "Our best estimates are 2021 or so would be the time that we could have a replacement."

The Air Force’s portfolio of investments through this BAA is in the focus areas of Material Manufacturing and Development, primarily focused on reducing the cost of future engines, and Advanced Technologies, primarily focused on advancing the state of the art for future engines.  These acquisitions will mature booster propulsion technology and reduce risk for the U.S. domestic industry base, according to Air Force officials.

Ten awards totaling approximately $34.6 million have been awarded under this BAA since Nov. 4, 2015.

By leading off this program with these awards, we have given industry tools to help ready themselves for developing launch systems, including the associated propulsion systems, that we will rely on to launch the nation’s satellites in the future,” said Lt. Gen. Samuel Greaves, the Air Force’s Program Executive Officer for Space and SMC commander.  “This is essential in order to solidify U.S. assured access to space, transition the EELV program away from strategic foreign reliance, and support the U.S. launch industry’s commercial viability in the global market.”