He succeeds Paul Verhoef, who has served in that capacity for almost six years and is now retiring, after a 40-year career spanning the European Commission, ESA and private industry.

Benedicto has worked at ESA in varying capacities for the last 30 years.

On October 21, the ESA Council appointed three new ESA directors, for Commercialisation, Industry and Procurement, for Earth Observation Programmes and for Navigation. The appointments were made at the recommendation of ESA’s Director General Josef Aslchbacher.

In the latter office, Francisco-Javier Benedicto Ruiz has been appointed as Director of Navigation. He will take up duty on 16 February 2022. . A Spanish national, Mr Benedicto Ruiz spent his early career in academia, working as a microwave engineer at the Polytechnical University Catalonia in Barcelona and as a telecommunications engineer at MIER Comunicaciones, also in Barcelona, before joining ESA in 1990.

He holds a master’s degree in science and telecommunications engineering from the Polytechnic University Catalonia and has more than 100 publications in technical journals and conferences, holds three international ESA patents, and has five honors and awards. 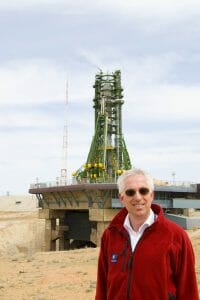 [Shown in photo from 2008: Javier Benedicto, at that time ESA’s Galileo Project Manager, with the Soyuz FG-Fregat rocket carrying ESA’s GIOVE-B satellite,  at the launch complex in Baikonour, Kazakhstan.]