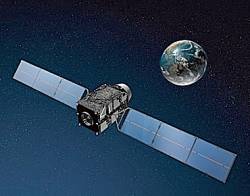 QZSS satellite looking at Japan from above (JAXA image)

Japan’s and India’s regional and augmentation satellite navigation programs look forward to an active year, according to speakers at March’s Satellite Navigation Summit in Germany.

Japan’s and India’s regional and augmentation satellite navigation programs look forward to an active year, according to speakers at March’s Satellite Navigation Summit in Germany.

Mikio Aoki, director of the Japan’s Secretariat of Strategic Headquarters for Space Policy, said that a budget request would be submitted in April to fund construction of a four-satellite QZSS – Quasi-Zenith Satellite System – by the end of this decade, following a cabinet decision last September to accelerate development of the system as quickly as possible.

The first, and still the only, satellite in the QZSS constellation was launched in 2010.

GPS was used widely in connection with the earthquake and tsunami that struck Japan a year ago, Aoki said. These include offshore wave meters that provide earlier tsunami alerts that the previous-generation shore-based gauges and the GPS reference network that measured the 5.3-meter east/southeast horizontal displacement and 1.2-meter vertical displacement caused by the earthquake.

He also described a cooperative effort between Honda and Google to quickly develop a navigable map showing road conditions in the affected area, which enabled vehicles bringing rescue and relief services to move through the area more efficiently.

He said that the second GAGAN satellite would be launched into geostationary orbit at 82˚E later this year. It will join the first spacecraft launched last May, which is now operational from its orbital location at 55˚E.