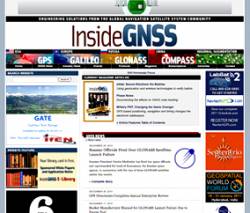 What do you read? In 2010, there were 37 percent more visits to insidegnss.com, and it’s interesting to see who among the GNSS interest groups dropped by and which topics attracted the most attention.

What do you read? In 2010, there were 37 percent more visits to insidegnss.com, and it’s interesting to see who among the GNSS interest groups dropped by and which topics attracted the most attention.

Countries of Origin for Website Visitors
Given the pioneering role of the Global Positioning System and Inside GNSS’s U.S.-based English-language media,  the United States naturally leads the list of nations for our website viewers. Indeed, U.S. visitors roughly equaled the total of the next nine countries, which were in order: China, Germany, Canada, United Kingdom, France, Japan, Russia, Italy, and India.

But a little different picture emerges if we look the traffic on a continental basis. There the Americas (North and South) account for only 41 percent of visitors; Europe, 35.5 percent; and Asia, 19.6 percent.

Interest by GNSS System
Most of our website visitors have noticed the categorical buttons near the top of our web pages listing the four current GNSS systems as well as one for regional/augmentation systems. After our homepage itself, these account for some of the highest traffic on the site.

European GNSS officials may be comforted to learn that the Galileo button drew the most activity during 2010, followed closely by GPS, Compass, and, a little further down, GLONASS.

Top 10 Most-Read Articles
The insidegnss.com news item that caught the most attention last year was the U.S. government’s decision to phase out the Loran-C terrestrial navigation system. Vocal and high-level advocates of an enhanced Loran (eLoran) argued that it could serve as a useful backup in case of GPS (or more generally, GNSS) outages to no avail. Our story was posted on January 6: “USCG Publishes Loran-C Termination; DHS Says Not Needed for GPS Backup.”

The next most-read article on our website during 2010 certainly had longevity – it was posted the year before on March 23, 2009.  “GPS, GLONASS, Galileo, Compass: What GNSS Race? What Competition?” described a seminal opening session of the 2009 Munich Satellite Navigation Summit.

This abiding interest in some topics repeated itself as the third, fourth, seventh, eighth, and tenth most-read stories came from pre-2010 magazine articles. Respectively: “GNSS Over China: The Compass MEO Satellite Codes” from our July/August 2007 print issue; “Grace Xingxin Gao: Amazing Grace,” our Human Engineering profile from March/April 2009 Inside GNSS; "GPS-IMU — Development of a High Accuracy Pointing System for Maneuvering Platforms,” (March/April 2008); the introductory article in our mini-series, “The GPS EASY Suite II: A Matlab Companion”; and “GNSS and Ionospheric Scintillation — How to Survive the Next Solar Maximum,” (July/August 2009).