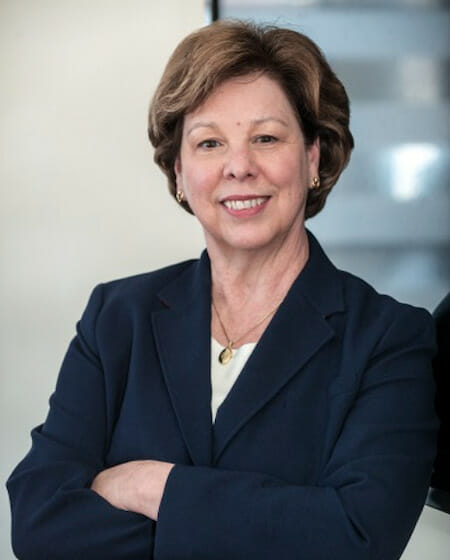 Patricia Helen Doherty, a past ION president and current Satellite Division Chair, passed away on July 14 at the age of 72.

The well-known industry leader worked at Boston College for many years, serving as the director of the Institute for Scientific Research at the time of her passing, according to an In Memoriam article featured on the ION website.

“Pat Doherty has made pioneering and sustainable contributions to advance our understanding of ionospheric effects on satellite navigation,” according to the article.

Patricia was involved in the early assessment of ionospheric delay impact on GPS measurement errors. She also played an important role in evaluating ionospheric limitation of the FAA’s Wide Area Differential GPS (WADGPS) and performances of algorithms to correct ionospheric errors for WASS. In the past two decades, she and her collaborators studied the ionospheric impact on GNSS at every continent and every region of the world. Most recently, she focused on space weather phenomena and its impact on technology and society.

Patricia was also known for her passion project: promoting research and education in the science of navigation in developing countries. She started and led an initiative for more than 10 years “to help developing countries derive social and economic benefits from the satellite-based technology of positioning, navigation and timing.” She organized and chaired prominent ION members to teach professors and scientists from African universities and other developing countries. Her outreach efforts lead to the creation of many academic programs, with some already up and running and others in development.

“Pat worked as hard as she did with her volunteer efforts in Africa because she knew GNSS would improve the quality of life for underprivileged societal groups,” ION Executive Director Lisa Beaty said. “As a ‘GNSS-diplomat,’ Pat was generous with her intellect, but also with her spirit as she mentored numerous groups of women and aspiring female engineers from third world countries. I knew her as a bastion of generosity, elegance and grace in the GNSS community.”

As an active ION member and leader for 20 years, Patricia served as ION president (2013 and 2014) and was the chair of the Satellite Division at the time of her passing. She was an ION Fellow (2012) and recipient of the Burka Award (1995), Weems Award (2014), and Distinguished Service Award (2014). She also received the 2017 GPS World Leadership Award and 2018 American Geophysical Union (AGU)’s Space Physics & Aeronomy Richard Carrington (SPARC) Award.

She is survived by Charles, her husband of 49 years, and her children, and will be missed by friends and colleagues from all over the world.

“She is known throughout the PNT and space sciences community as an exemplary and generous leader, role model and mentor. The absence of her elegant grace will be sorely missed.”