How do GNSS-derived heights differ from other height systems? - Inside GNSS - Global Navigation Satellite Systems Engineering, Policy, and Design 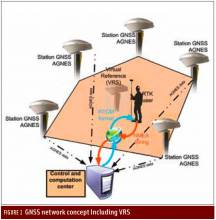 Q: How do GNSS-derived heights differ from other height systems?

On the one hand, the GNSS technique has error sources that are more critical in the vertical direction. Height estimates are weaker because of a combination of satellite geometry, the presence of strong correlations to other parameters, such as atmospheric delays, and the antenna phase center model applied during data analysis.

Q: How do GNSS-derived heights differ from other height systems?

On the one hand, the GNSS technique has error sources that are more critical in the vertical direction. Height estimates are weaker because of a combination of satellite geometry, the presence of strong correlations to other parameters, such as atmospheric delays, and the antenna phase center model applied during data analysis.

On the other hand, a difficulty arises in that GNSS techniques always give us results as geometrical heights. These heights are different from physical heights, which are sensitive to gravity. Only physical heights, for instance, can indicate the direction of flowing water.

Physical heights or simplifications of these are often used for the height systems in various countries. Furthermore, several national height systems might be in use in the same country, e.g., a new and an older height system. Proper handling of the effects for the vertical component may be challenging for users.

This article focuses mainly on the various height systems that GNSS users should be aware of. We give general background information about national height systems and its relation to the GNSS-derived heights. Examples showing the different height systems in Europe in general and in Switzerland in particular will shed more light on the topic.

The “magic” refers to the geoid and its determination.

Wikipedia has a nice, concise definition of the geoid as “the equipotential surface which would coincide with the mean ocean surface of the Earth, if the oceans and atmosphere were in equilibrium, at rest relative to the rotating Earth, and extended through the continents.”

The Earth’s geoid is by far not as rough as the planet’s surface geography, but nevertheless shows differences of about 100 meters compared to a mathematically best earth-fitting rotational ellipsoid (e.g., the WGS84 ellipsoid used in GPS).

For example, the geoid is approximately 100 meters below the WGS84 ellipsoid in the area of the Indian Ocean. This is visible as the dark blue area in the global geoid image displayed in bottom right corner of Figure 1. In Switzerland the geoid is about 50 meters above the ellipsoid. The irregular shape of the geoid is often approximated by spherical harmonics.

The current, best global geoid model is called EGM2008, published in 2008 by the National Geospatial-Intelligence Agency of the United States. This gravitational model is complete to spherical harmonic degree and order 2159. However, instead of using the coefficients, a 1 x 1 and a 2.5 x 2.5 minute grid and programs for computing geoid undulations relative to WGS 84 ellipsoid are available.

A large variety of data, such as from global gravity satellite missions and from gravity measurements on the Earth’s surface, were used to compile EGM2008. Local measurements of deflection of the vertical and GNSS/leveling data were not used.

Comparisons of this global model with more accurate local geoid models indicates discrepancies (accuracies) on the order of decimeters in many regions of the world with much larger discrepancies in mountainous regions or regions with a small number of observations. This accuracy level is good enough for private outdoor applications but not sufficient for many surveying applications.

In contrast to global geoid models, continental geoids or national geoids — usually aligned to global or continental geoid models — are compiled using much more local gravity data, measurements of the deflection of the vertical, and GNSS/leveling data. These models allow accuracies up to of 1–3 centimeters in flat regions and 3–5 centimeters in mountainous regions. As an example, the geoid for Switzerland is shown in Figure 2 (see inset, above right).

If a country has more than one height system, a transformation between the orthometric height and the local height system (see Figure 1) is needed. In practice, this transformation consists of corrections dependent on the location, very similar to the geoid model. Therefore, “correction surfaces” consisting of the accumulation of geoidal and other transformations (e.g., the sum of the two corrections shown in Figure 2) are sometimes provided by the national mapping agencies in order to directly derive nationally used heights from the GNSS-derived heights.

Modern high-precision GNSS receivers often have a grid implemented internally where they obtain the geoid height or, alternatively, a special height correction with which to derive heights of a nationally used height system. Both of these corrections are based on the user’s current position.

Unfortunately, various formats for the national coordinate definitions and for the geoid models are available and usually each software has its own internal format. As such, a prominent problem remains: users are often uncertain whether the geoid undulation was applied properly (with the correct sign, not twice by applying it in real-time and in post-processing) and if the geoid model employed is compatible with the correct reference ellipsoid being used in the application!

An extremely precise geoid determination is presently realized at CERN (the European Organization for Nuclear Research) in Geneva. For the Compact Linear Collider (CLIC) Study a “micrometer geoid” is determined by measuring deflections of the vertical and gravity every 10 meters along a profile at the Earth’s surface directly above the 800-meter long tunnel. This calculation needs to be compatible with the micrometer-precise hydrostatic leveling and probably represents a world record in astro-gravimetric geoid determination precision.

Relation between Different National Height Systems
Height systems in various countries may differ by the type of the height system and also by the datum definition.

In Europe, three different kinds of heights (normal heights, orthometric heights, and normal-orthometric heights) are used and several tide gauge stations are used to define the geodetic datum (see Figure 3). As a result of this, unless proper care is used, heights at the borders between countries may differ by several decimeters.

Several years ago, a bridge between Germany and Switzerland crossing the river Rhine was built. For the planning phase the country differences should be taken into account. Instead of removing the effect of 25 centimeters, however, the planners introduced an error of 50 centimeters. This error needed to be eliminated after the start of the construction phase.

To have a worldwide, or at least a continent-wide height system available similar to the geometrical International Terrestrial Reference System (ITRS) would certainly make life much easier. But the realization of such a vision will certainly need decades, because all countries need to update the coordinates of their geodetic infrastructure. And, news of a new system is not always good news for everybody.