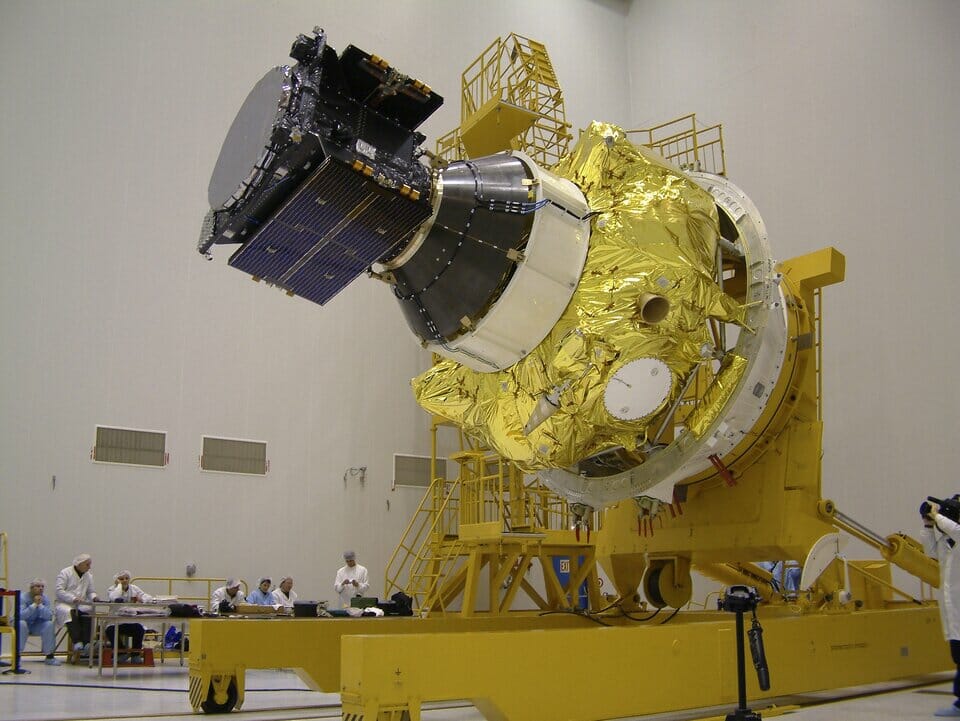 “If not for GIOVE-A the 26 Galileo satellites in orbit today would not exist,” said Paul Verhoef, ESA’s outgoing Director of Navigation. “Its speedy development and launch opened the way for our working constellation to follow.”

ESA had begun designing Galileo at the turn of the century, and radio frequencies had been set aside for the new system by the International Telecommunications Union. But these frequency filings came with a deadline attached: the frequencies had to be used from orbit by mid-2006 or they would lapse. GIOVE-A was produced at top speed by Surrey Satellite Technology Limited (SSTL) in the U.K. to meet this deadline. Developed in the second half of 2003, the satellite was designed, built, and tested before the end of 2005 – launched on 28 December of that year.

“At the time there was a lot of uncertainty: would we make it or not?” recalled Javier Benedicto, Head of the Galileo Project Department in ESA, and the agency’s new incoming Director of Navigation. “GIOVE-A transmitted its first Galileo signal-in-space on 12 January 2006, meaning that Europe was formally in the navigation business.” That March ESA formally confirmed it had brought the Galileo-related frequency filings into use, three months ahead of the official ITU deadline.

The mission carried a prototype rubidium atomic clock, proving that functionality for the operational Galileo satellites that would follow. It also carried a radiation instrument to measure enhanced radiation levels from the impinging of the outer band of Earth’s Van Allen radiation belts.

A second Galileo prototype, GIOVE-B, followed its predecessor in 2008. ESA ended use of GIOVE-A in 2012, placing it in a graveyard orbit 100 km above the subsequent Galileo constellation’s operational orbits, as well as GIOVE-B after its own four-year mission.

Control of GIOVE-A, however, passed to manufacturer SSTL and the satellite was then employed for various in-orbit experiments, including demonstrating the reception of satellite navigation signals from GPS satellites orbiting below it, based on spillover ‘sidelobe’ reception from satellites on the other side of Earth.

This proof that satnav can be relied on further out into space means that satellites in geostationary orbit are making use of satnav for positioning. As a next step, ESA is planning to extend satnav coverage all the way to the Moon.

The satellite continued its radiation survey of medium-Earth orbit, acquiring a unique record extending across more than 10 years, analyzed by the Surrey Space Centre with ESA support. Multiple scientific papers have been written on these results, which encompass the “electron desert” of 2008-9 during what was the lowest levels of solar activity during the space era, followed by one of the largest electron storm events on record in April 2010. A new model of the outer Van Allen belt electron fluxes, ‘MOBE-DIC’, has subsequently been produced from this dataset, helping to guide future satellite designs.

“The satellite itself is still operating well,” said Sarah Lawrence of SSTL. “The reason for ending the mission is software obsolescence in our control centre. The decommissioning procedure involved transitioning the satellite to Earth pointing mode, turning off the reaction wheels and setting the attitude and orbit control system to standby mode, before finally switching off the on-board computer and transmitter.”

Information and photo (GIOVE-A Earthbound, prior to launch) came from an ESA press release.