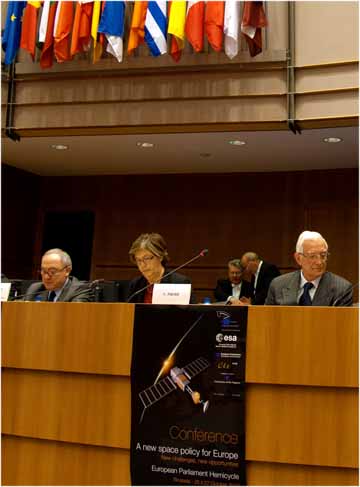 Amid continuing debate over how to handle budgetary shortfalls in building a European GNSS, the European Space Agency (ESA) signed a €194 million ($270.5 million) contract on October 25 with Spaceopal to provide space- and ground-based services to operate the Galileo constellation once it has been fully deployed.

Amid continuing debate over how to handle budgetary shortfalls in building a European GNSS, the European Space Agency (ESA) signed a €194 million ($270.5 million) contract on October 25 with Spaceopal to provide space- and ground-based services to operate the Galileo constellation once it has been fully deployed.

On the occasion of the contract signing, European Commission Vice-President Antonio Tajani, Commissioner for Industry and Entrepreneurship said, “Galileo is becoming a reality. . . . We are fully committed to the roll-out of the system. Given the increased reliance of companies and citizens on satellite navigation, Galileo will play an important role in our daily lives.”

Three days later on October 28, the European Commission (EC) issued a communication on industrial policy that emphasized its commitment “to complete the Galileo constellation and put in place a new governance scheme.”

In between, European Union (EU), EC, ESA, and industry leaders debated the best ways to cut costs and raise additional funds for the Galileo program during discussions at a high-level conference in Brussels under the theme, “A New Space Policy for Europe.”

Meanwhile, problems with a monitoring station GPS receiver that delayed the start of the European Geostationary Navigation Overlay Service (EGNOS) safety of life operations appears to be nearing resolution.

The contract awarded to SpaceOpal GmbH — the fourth of six planned “work packages” to support creation of an initial operational capability for Galileo — covers the industrial services needed to support ESA in operation of the satellites as well as the ground infrastructure. The two remaining procurement contracts, for the completion of the ground mission infrastructure and the ground control infrastructure, will be awarded in early 2011, according to the EC.

Galileo is now expected to become operational in 2014 and will provide three initial services: the Open Service (free), the Public Regulated Service (PRS) and a Search-And Rescue Service. Launches of the first of four in-orbit validation (IOV) satellites has been repeatedly delayed for technical and financial reasons and are now scheduled to occur in the second half of 2011.

Cost overruns in the IOV phases and higher than expected launcher costs led the EC late last year to acknowledge that the €3.4-billion allocated to the project would not be enough to complete the FOC system with a 27-satellite constellation.  Only enough funds for an14 satellites (plus the IOV spacecraft) were available. Consequently, full operational capability (FOC) has been pushed back to the 2016–18 timeframe and will require additional funds.

Backers of the program in the European Parliament have suggested that guarantees that new funds for Galileo will be available in 2012 and 2013 should be included in the 2011 EC budget, which is currently being negotiated.

However, Germany’s transport ministry has asked the EC to come up with ways to reduce the cost of the program. According to European news reports, one option might be to launch all the satellites on Russian Soyuz rockets from a Russian facility instead of using the Ariane 5 launcher and the Kourou site in French Guiana.

Lisbon Treaty: A New Dimension in Space?
Co-organized by the European Parliament’s Sky and Space Intergroup and Business Bridge Europe, the Brussels conference took place against the backdrop of the Lisbon Treaty, which entered into force on December 1, 2009, and adds a new dimension for European space policy and for Europe’s ambitions in the exploitation and exploration of space.

The space policy debate revolves around issues of R&D, competitiveness, and sustainability to ensure the status of Europe not only in space capabilities but also in world affairs.

At the Brussels conference, Herman Van Rompuy, president of the European Council, emphasized the political and strategic dimension of space for Europe. “We must promote Europe as a space power. To achieve this, we must build on the experience of ESA,” said Van Rompuy.

In highlighting the importance of the Lisbon treaty for space matters, Jean-Jacques Dordain, ESA’s director general, stressed that “the new competences of the European Union in space should allow Europe to be stronger in the world and to become world leader, through the relevant EU policies, in a number of domains that use space (environment, climate change, management of natural or man-made disasters, maritime surveillance, air traffic control, aid to development, security).”

Despite the signing in 2007 of an EC/ESA agreement on a comprehensive European Space Policy and a separate cooperation agreement on Galileo and the European Geostationary Navigation Overlay Service (EGNOS), the issue of which institution — and, notably, which set of acquisition rules — should lead Europe’s space initiative remained in question.

EGNOS Service Back on Track
Implementation of the EGNOS safety of life (SoL) service has been delayed until November due to a glitch with a GPS receiver in an EGNOS monitoring station. A space-based augmentation system (SBAS) similar to the U.S. Federal Aviation Administration’s Wide Area Augmentation System (WAAS), EGNOS provides improved accuracy and integrity for GPS positioning,

The problem appeared on August 2, when the European Satellite Services Provider (ESSP) responsible for managing EGNOS operations initiated the procedure to transition towards the SoL service. A few minutes after the first step of this procedure, the EGNOS Signal-In-Space transmitted “NOT MONITORED” messages for all GPS satellites and for the ionosphere correction data, rendering the service unusable.

The problem arose when one type of GPS receiver used in the monitoring stations performed an unnecessary check of the EGNOS GEO-ranging function. According to ESSP, the receiver performed a check on the value of bit 0 of the “Health and Status” parameter contained in Message Type 17 (MT17).

Because the GEO-ranging function is not activated for EGNOS, this bit 0 of MT17 is set to 1 (Off) in EGNOS transmissions. The receiver wrongly interpreted this status as a fault condition and reported this condition to the EGNOS processing facility. On August 6, ESSP reverted to the OS signal, i.e. broadcasting the EGNOS signal with Message Type 0 (“Don’t Use for Safety Applications”).

ESSP says that all events observed at the system level have been traced back to a single cause at the level of the receiver in the monitoring station. A correction has been developed and is now undergoing subsystem and system-level testing in accordance with the development standards applicable to EGNOS.

ESSP expects that these remedial activities will be concluded and reflected in an updated qualification file by the end of October, which will be deployed with civil aviation authorities. Consequently, the EC and ESSP expect the SoL transition procedure to be initiated again in early November 2010.

Completion of the SoL transition is planned by the end of 2010. If all goes well and the SoL service is then declared available, the first EGNOS approaches with vertical guidance (APV) will then be possible for suitably equipped aircraft beginning in January 2011.