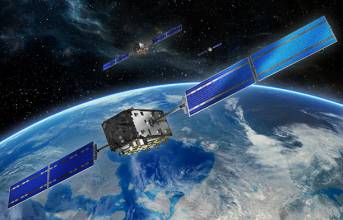 The European Space Agency (ESA) signed a contract Thursday with a German-British consortium to build eight additional satellites for its Galileo navigation constellation.

The deal, which brings the Galileo navigation constellation to completion, was signed at the International Paris Air Show with German company OHB System AG as the prime contractor, and Surrey Satellite Technology Ltd. overseeing the navigation platforms.

The European Space Agency (ESA) signed a contract Thursday with a German-British consortium to build eight additional satellites for its Galileo navigation constellation.

The deal, which brings the Galileo navigation constellation to completion, was signed at the International Paris Air Show with German company OHB System AG as the prime contractor, and Surrey Satellite Technology Ltd. overseeing the navigation platforms.

This is the third such satellite signing: the first four In Orbit Validation satellites were built by a consortium led by Airbus Defense and Space, while production of the next 22 Full Operational Capability (FOC) satellites was led by OHB.

These new batch satellites are based on the already qualified design of the previous Galileo FOC satellites, except for changes on the unit level – such as improvements based on lessons learned and reacting to obsolescence of parts.

“This procurement from OHB will enable the completion of the Galileo constellation and have reserves both in-orbit and on-ground,” said Verhoef. “This signing delivers the necessary infrastructure robustness that is essential for the provision of Galileo services worldwide.”

Further launches will continue to build the satellite constellation, which will gradually improve the system performance and availability worldwide. The launch by Ariane 5 of another four satellites is due to take place later this year.

The full Galileo constellation will consist of 24 operational satellites in three orbital planes plus orbital spares, intended to prevent any interruption in service.

These new eight satellites will provide the constellation with in-orbit and on-ground spares. ESA and the Commission are also in the process of developing an improved Galileo Second Generation for the next decade.
Galileo is now providing three service types, the availability of which will continue to be improved.

According to ESA, the public will begin benefiting as Galileo-capable devices enter the marketplace: 17 companies, representing more than 95% of global supply, now produce Galileo-ready chips.

OHB System AG
OHB System AG was awarded the contract worth EUR 324 million to produce the additional eight navigation satellites for the Galileo program. This will increase the number of Galileo FOC satellites supplied by OHB to a total of 30, of which the first 14 are already in orbit.

“I am very pleased that after delivering 22 satellites under the first two contracts OHB has now also retained the confidence of ESA and the European Commission in the third bid. We are proud of being able to make such a crucial contribution to this major European project that will be providing so many people around the world with valuable services,” said Fuchs, CEO of OHB System AG, after signing the contract in Paris.

“Our modular satellite design is outstanding and has proven itself with superb results. A large part of the satellites that we have already assembled have demonstrated their full functional capability in space. For this reason, there will be no major changes to the design of the eight new satellites. At this stage, we are working on the basis of a first launch date in 2020,” says Paetsch, who previously oversaw the development of the first and second satellite batch.

In its capacity as the producer of the satellite platform and the system manager, OHB is responsible for the satellite design and platform, integration and verification. In addition, it will be providing support during the launch preparations and in-orbit verification.

Shaping the Future
OHB wants to continue contributing to this project in the future. In Bremen, it is already working on designs for the next-generation Galileo satellites. In various studies for ESA, the engineers are exploring new materials and components and further services to be provided by the next generation, the company said.

They are incorporating the experience gained from engineering and producing the previous navigation satellites. In this way, OHB can contribute proposals for the design of the next-generation satellites and offer the customer the benefits of the unique experience that it has gained from the successful first series.

The Galileo constellation will permit global positioning and navigation as well as support an international search and rescue service (COSPAS-SARSAT). Navigation signals will be broadcast in two frequency bands: The Open Service (OS) will be free for anyone to access with a corresponding receiver. The encrypted Commercial Service (CS) will be available for a fee and offer an enhanced accuracy via additional signals. The encrypted Public Regulated Service (PRS) offers heightened integrity and robustness against jamming and is targeted primarily at security authorities (police, military, etc.) and safety-critical transport applications.