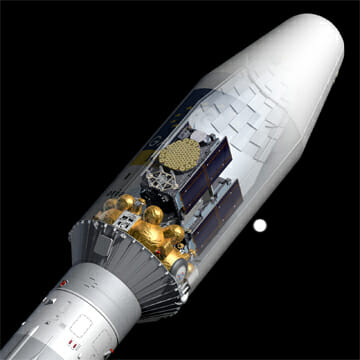 Galileo IOV satellites attached to their launch dispenser and encapsulated beneath the fairing of their Soyuz ST-B launcher Credit: ESA – P. Carril

Liftoff from the European spaceport in Kourou, French Guiana, is scheduled for Thursday, October 20, at 11:34 GMT (7:34 a.m. local time). Progress in the operations and news updates can be viewed online at the European Space Agency website.

Liftoff from the European spaceport in Kourou, French Guiana, is scheduled for Thursday, October 20, at 11:34 GMT (7:34 a.m. local time). Progress in the operations and news updates can be viewed online at the European Space Agency website.

Once expected to reach full operational capability (FOC) in 2010, Galileo has endured a nearly two-decade gestation, encumbered along the way by a diverse set of technical, political, and budgetary obstacles. The current schedule calls for launch of the remaining two IOV spacecraft in mid-2012 and the first two fully operational satellites by the end of next year.

If all goes as planned, an initial operational capability (IOC) based on 4 IOV and 14 production space vehicles (SVs) will be in place by 2014 providing three levels of service: a free Open Service (OS) for civil users, a search and rescue service, and an encrypted public regulated service (PRS). A high-precision Commercial Service may also be tested during the IOV phase.

Yesterday (October 13, 2011), the twin IOV satellites were enclosed within their upper-stage Soyuz-2 rocket’s launch fairing. Last week saw the SVs attached to their supporting dispenser and then mated to the Fregat-MT upper stage earlier this week.

The Galileo launch will be the first for the modified Russian Soyuz launcher from a specially constructed facility at the spaceport.

The FOC constellation will have 27 operational satellites and three reserves, all stationed on three circular medium Earth orbits (MEOs) at an altitude of 23,222 kilometers (14,429) with an inclination of 56 degrees to the equator. The IOV satellites were built by a consortium led by EADS Astrium; OHB-System AG, of Bremen, Germany, and the UK’s Surrey Satellite Technology Ltd. (SSTL) will provide the FOC spacecraft.

Having committed to a limit of €3.4 billion (US$4.72 billion) for the present seven-year budget cycle that ends in 2013, the Galileo program ran out of funds for completing the full 30-SV constellation.  In January 2011, a mid-term review projected the cost to complete an FOC Galileo system as €1.9 billion ($2.64 billion), with operating and exploitation costs €800 million a year.

Earlier this year, however, European officials said that savings in the Galileo program had freed up funds that may be able to support acquisition of at least six additional spacecraft by 2014. The European Commission and European Parliament must still work out an agreement to allocate those funds so that FOC can be achieved by the nominal completion date of 2019-2020.

Despite the terminology, the IOV SVs and the operational satellites and very similar in design and capability, the primary difference being a high power capacity on the latter: peak power of 1600 watts versus 1420 watts on the IOVs.  With OHB acting as contractor general and providing the satellite platforms, and SSTL supplying the payloads, the satellites will be delivered at rate of one every six weeks.

A 3D presentation of the Galileo satellite navigation system was posted on YouTube this week. (Use of red/blue 3D glasses is recommended to enjoy the full 3D experience of the video.)