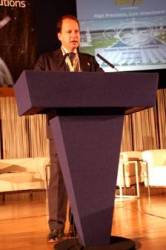 According to European Union (EU) figures, there should be €90 billion in benefits to be reaped by industry as a result of Europe’s €11 billion investment in Galileo. But what that really means is that there will be €90 billion in new income out there for someone to take.

According to European Union (EU) figures, there should be €90 billion in benefits to be reaped by industry as a result of Europe’s €11 billion investment in Galileo. But what that really means is that there will be €90 billion in new income out there for someone to take.

The European Commission (EC) and the European GNSS Agency (GSA) want that someone to be — well, no surprise here — European. If EU businesses and entrepreneurs do not step up to the plate, a major part of the Union’s argument for creating the system in the first place will have been blown out of the water.

As the GSA’s Head of Market Development, Gian Gherardo Calini is responsible for getting European industry moving on the new opportunities opened up by Europe’s Galileo program.

Speaking in Brussels to gathering of European industry representatives, his main point, he said, was that, “Market development activities, along with policies, are fundamental if we want to capture the benefits of all this EU investment. There are big opportunities out there that we are not yet fully exploiting.”

Calini proceeded to prove his point, listing key areas where GNSS markets are expanding and presenting new opportunities for business.

For example, Europe’s satellite-based augementation system, EGNOS, has already achieved an impressive level of penetration in the agriculture sector, affecting as much as 65 percent of European farming activities.

But it won’t stop there, Calini told the June 4 workshop on applications of EU satellite navigation program.s

“The Galileo Open Service [OS] will be a big hit in the agriculture sector,” he said, “but we also expect to see a strong interest in the Commercial Service [CS]. Agriculture will be a major sector for the CS, with the trend towards increasing farm size.”

EGNOS is also making inroads in civil aviation, and Galileo, once operational, will be equally significant here, Calini predicted.

“Road transport is huge,” he said, holding up the example of the French EcoTaxe project: “pay-as-you-drive, connected vehicles, the digital tachograph, automatic emergency assistance. Applications related to dangerous goods transport are still not being used everywhere in Europe. . . . You should invest in GNSS for road transport!”

Moving on to location-based services or LBS, Calini cited two specific areas where there is money to be made – “chipsets and smartphones, in particular the integration of multi-constellation capabilities into chipsets.”

“In surveying and mapping, we see obvious advantages here,
Calini said.” There is a good business case in this sector, where low-cost GNSS devices will deliver better performance than conventional instruments.”

While not exactly scolding the assembly, the GSA representative didn’t let them rest easy either. Calini sounded almost like a coach giving a pep talk. And that may be just what’s needed. He was essentially saying to the industrial “team” – “Look at all the areas where we could be and should be doing more.”

And no one can accuse him of exaggerating.

“Robustness, availability, trustability, authentication, urban canyon performance,” said Calini. “We are creating a very strong system in the EU and adding value to the other systems.”

But there is no sense at all in waiting for early or late Galileo services, he argued.

“We are taking actions in market development in all sectors at all levels of the chain.”

“We need to accelerate this capturing of the 90 billion,” Calini said.” We want to maximize the return on our investment, and that’s why we’re all here. I am here to challenge you as representatives of industry to do more to capture your share of the market, in Europe and in the rest of the world. There are so many opportunities — the sky is the limit. It’s for you to imagine and invent. So, let’s go!

All Hands on Deck
Clearly, with everyone now confident and comfortable with the Galileo launch schedule, new applications are what it’s all about, for the European Commission as well.

Michel Bosco, the Commission’s Deputy Head of Unit for EU Satellite Navigation Applications, underlined the importance of stimulating activity on the users’ side — not just apps that depend on Galileo/EGNOS, but those that can leverage any and all GNSSs.

Much of the progress already made in getting the European GNSS industry up and running has been due to the Commission’s “Applications Action Plan” (AAP), launched in 2010 and running through the end of this year. The AAP was aimed at encouraging universities and companies to work on GNSS applications.

Its basic elements were, first, getting EGNOS operational for civil aviation. That has been achieved, although progress in certifying landing procedures is an ongoing process. Second, an awareness campaign, undertaken by the GSA, which Bosco sayid has been successful.

“People know about us,” he told the workshop audience. “The campaign was well-targeted towards user communities.”

Third, regulatory actions have been launched, and, finally, the financing of apps-related R&D, also overseen by the GSA.

“We are still waiting for an overall budget,” he said, referring to the fact that the European Parliament has still not approved the seven-year EU budget beginning in 2014. “But we expect as much or more available funding per year as before.”

The EC is now considering a second AAP, for 2014-2018. Indeed, one of the major questions for the meeting was whether phase 2 of the program is needed.

“Not enough money is going into SMEs [small- and medium-sized enterprises] that need it for GNSS technologies,” he said.

Interoperability is also an area of ongoing interest. “We need to act together with USA and others. And we need to understand how to best take advantage of multiple constellations, while Galileo’s added value remains at the forefront.”

Finally, the second AAP would have a strong regulatory component, although Bosco says the Commission is still considering its strategy in this area. Should it push for mandating Galileo readiness? To the exclusion of other GNSSs?

Concerns were raised from the audience about the effects of regulatory mandates on air traffic management, where pilots are already complaining about too much equipment in the cockpit and costs for operators are rising. The Commission, Bosco said, is ready to listen and take all suggestions under consideration.

“We are not proposing, yet. We are consulting, including asking you,” he said. “We are considering options — from doing nothing to doing everything. It is not likely that you will ever see all-encompassing Galileo mandates.”

Where We Are and Where We Aren’t with the CS
With the overall message clear, some audience members had specific questions about future Galileo services, in particular the Commercial Service, which has yet to be fully worked out.

The EC’s Ignacio Fernandez Hernandez agreed that work still needs to be done to define the CS. Some form of encryption is on the table, he confirmed, but the Commission is still assessing the best way to achieve this. Encryption key in the receiver? Some other system?

Bosco reminded the participants that the CS appears later in the sequence of planned early services, “but we are committed to deliver it,” he said. Officials are considering what weight to place on accuracy and precision versus authentication and other characteristics.

Calini said “Authentication has always been a component of the CS. This is the real selling point. There are going to be great opportunities for Galileo authentication.”

Another audience member, representing Astrium Services, a company active in the geospatial information market, expressed concern that the CS could actually threaten his company’s business.

Calini responded, “Our interest is to build market share. We are not trying to go against the interest of any single company. We don’t want to compete with you. Delivering benefits for all of us together, the EU, is our goal. We have invested €11 billion and we want a return, but also in terms of public benefits and industrial competitiveness. We do not want to hurt our own companies.”

Of course, it is quite reasonable to wonder whether the CS, representing a service that overlaps at least to some extent with existing location-related paid services, could hurt existing providers.

Fernandez tried his hand at addressing the point. “The public sector should not compete with the private and undermine our own industry,” he said. “The CS has always been understood as a way to recoup some of the costs of Galileo, but this must be balanced. We don’t want to compete with existing security providers. For you, the CS must be an opportunity.”

The consultation is far from over, he suggested. “In principle there will be a selection process for who will be the CS provider, two to three years from now. For now, we continue to receive your feedback, we are consulting with industry.”

Whether on the question of stimulating GNSS investment, funding research and development, pushing for the right regulatory schemes or just getting out there and doing business, one thing seems clear — the EU is putting more and more of the onus in the hands of industry.