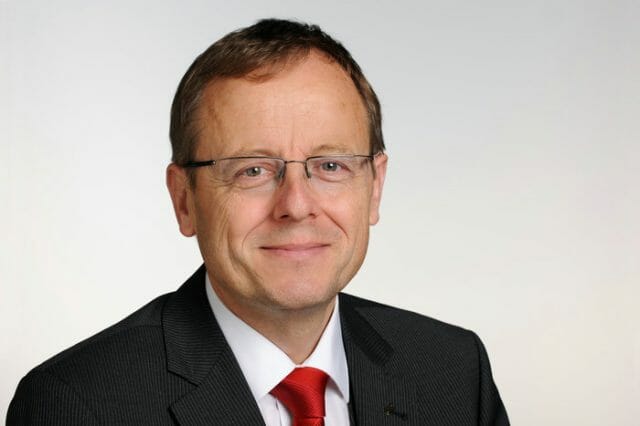 Instead, only two satellites were launched in 2014, and those into the wrong orbits. At his year-ahead press conference in Paris on January 16, Dordain explained what went wrong and what we can expect in 2015.

Instead, only two satellites were launched in 2014, and those into the wrong orbits. At his year-ahead press conference in Paris on January 16, Dordain explained what went wrong and what we can expect in 2015.

“We saw some delays in the Galileo program last year, linked to certain difficulties that come up with this kind of program.”

At that time, he said, the key milestones for Galileo in 2014 would be the launches, of which there were going to be three, each taking two satellites into orbit. Instead, in 2014, there was a single launch, and that one was a failure. Speaking at this year’s opening press conference, Dordain did his best to put a happy face on the year gone by and the prospects for the year ahead.

He spoke in French, so the citations here are translated and perhaps best considered paraphrased.

Once Again, No One to Blame
“The EU’s Galileo program, run by the European Commission with ESA delegated the task of deployment, is en route, even though we are late because of the August launch problem,” Dordain told reporters.

Back in August, two Galileo satellites were delivered by a Soyuz launcher into an anomalous elongated orbit that took them out to 25,900 kilometers above Earth and back down to 13,713 kilometers, rather than the planned circular path at 23,222 kilometers. The orbital angle in relation to the equator was also wrong.

“The satellites were not placed in the right orbit,” Dordain explained, “not nominal, too low. This is why Galileo is late. The two satellites, however, are working perfectly.”

Indeed, as we learned after the launch, the failure was not linked to the satellites themselves but to the Russian rocket’s Fregat stage, which malfunctioned.

A special Independent Inquiry Board concluded last October that ambiguities in design documents back in Moscow had allowed the installation of a perilous “thermal bridge” between a helium line and a fuel line, giving rise to the malfunction and simultaneously to conspiracy theories about possible Russian sabotage.

All Is Not Lost
International intrigue aside, the satellites’ shifting altitude left them unable to lock onto Earth for part of each orbit, ESA explained, preventing them from being used for navigation purposes.

Last November, ESA undertook a series of maneuvers to place one of the two satellites into a more circular orbit, some 3,500 kilometers higher, allowing its navigation payload to be switched on for testing.

Dordain continued: “We changed the orbit of one of the two satellites last November and all of our tests show it is working perfectly. Yesterday [January 15, 2015] we began working to modify the orbit of the second.”

Indeed, both satellites will undoubtedly be found to be in perfect working order, and their signals will prove valuable to a limited extent, but they will never function as originally intended as full contributors to the Galileo constellation.

Still, they are up there and they are assets. And, as Dordain reminds us, they will actually live longer, because radiation exposure is greatly reduced in their anomalous orbits.

Early Services Will Be Late
Needless to say, the failed August launch represented a withering blow to a program already plagued by setbacks, putting a halt to any plans for the “early-2015” launch of Galileo services.

Although the inquiry board moved quickly, identifying the cause of the launch failure and largely absolving both ESA and the European Commission (EC) of any direct responsibility, further launches were put on hold and 2014 turned into a complete washout for Galileo satellite launches.

Dordain says two new satellites were ready for launch in December, but the EC decided it was better to hold off and have ESA conduct further tests on the satellites. He commended the EC for its wisdom in wanting to play it safe, although we know that the satellites weren’t the problem to begin with; the Russian Fregat stage was at fault.

Clearly the EC felt itself in a difficult position — once again hugely embarrassed by a failure that it had no real control over, it needed to respond to both public and political pressure by at least appearing to be in charge of something, putting the hammer down on the/any guilty party.

Meanwhile, ESA’s longstanding reputation as one of the world’s leading space agencies, arguably the greatest of all space contractors, keeps it largely insulated from criticism, even though it is itself dependent on contractors not dropping the ball — among others the Russians. So, the blame was always going to fall on the Commission.

Have it your way, said ESA, unperturbed. The December launch was put off, new tests were carried out at ESA’s technical center (ESTEC) in Noorwijk, Netherlands, and fresh Galileo satellites are now ready for launch, probably as soon as March.

“ESTEC thermal tests have now been completed on two further satellites,” Dordain said. “So, along with the two that were ready in December, there are now four ready for launch. And there will be two more coming this year for a total of six to launch in 2015.”

And that would bring the total to 10 fully functional and two in anomalous orbits by the end of this year.

The Commission has been silent on the question of a new date for early services. And who wouldn’t be?

New Launch Schedule Soon
Dordain said a new launch schedule will be decided by the Commission by the end of this month and will likely involve both Soyuz and Ariane 5 launchers. He said Russia still represents the best guarantee for launches through the 2015–2020 period.

“The August inquest found its result, actions are being taken, and we will be ready for a March launch, we are confident in a March launch,” he said. “Moscow has been working to resolve the problem identified by the inquiry, and it is now behind us.”

Asked what he would be advising in terms of the new launch schedule, he said, “We are still working on our advice to the Commission. We will advise when we are ready. Some work is ongoing; we have no revelations for you today. As for whether or not to launch in March, I will give my opinion to the EC before I give it to you.”

Year of Change
This year sees a new set of commissioners taking their seats at the EC in Brussels. Outgoing Commission Vice President Antonio Tajani was a formidable advocate for space and a strong partner to ESA, combining a charismatic speaking style, a sense of bravado, no doubt reflecting his time as an officer in the Italian Air Force and, according to many, a strong desire to make a name for himself in the political sphere. He was expressive, he named names when things went wrong, and he demanded results.

Asked about the person who has replaced Tajani as Commissioner for space, Dordain had little to say, referring only to “the Polish woman” (Madame la Polonaise). “I don’t know her personally,” he said. “I have seen her once, at a meeting.” But he said, he had plans to meet her again later in January.

The woman in question is Elżbieta Bieńkowska, the new EU Commissioner for Internal Market, Industry, Entrepreneurship, and SMEs, previously Poland’s deputy prime minister and minister for infrastructure and development. That role reflects that fact that the European space programs, rather than moving back to the EC transport ministry (now DG-MOVE) under the dynamic Slovakian commissioner Maroš Šefčovič, will remain in the reconfigured industry and enterprise directorate-general where it has resided for several years.

“We expect to maintain a good partnership”, said Dordain, “whoever is in the position. Our relationship with the EU is bigger than any individual.”

We know, of course, that individuals and their personalities do count.

No one who was there will have forgotten the grimaces around the table when the early EU-ESA accords were being hammered out and new titles and responsibilities being ceded.

And no one can have failed to notice how adversarial stances were replaced by a culture of cordiality and cooperation when Mr. Dordain appeared on the scene. Leaders do set tones and in Europe that still means something.

All these years later, Dordain reminded everyone that this would be his last January press conference, as he will be replaced as director-general of ESA at the end of June by Johann-Dietrich Wörner. In December, the ESA Council named Wörner, currently chairman of the executive board of DLR, the German Aerospace Center, as its next director-general for a four-year term.

“Whatever happens, I can only be held liable for half of this year,” Dordain quipped.

As he prepares to sign off, we wonder how the future dynamic between the new EU commissioner for space and the next ESA director-general will contribute or detract from the ever-evolving central partnership in the European space arena.

Will the commissioner be prepared to put her foot down, take no back-talk, and be a vocal advocate for space, or will she simply be a “game manager,” as it is known in European political circles?

Such things matter because Galileo has always been at least part smoke and mirrors. For his part, Wörner is keeping a low profile, having the good manners to allow the current leader, Dordain, to preside over his own farewell tour.

And so we say not adieu but à bientôt.