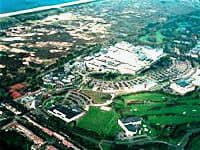 Aerial view of ESA-ESTEC facility at Noordwijk, The Netherlands. ESA photo by A. Van Der Geest

Antonio Tajani, the European Commission (EC) vice-president in charge of transport, announced the contract awards on January 7. The signing of the contracts by ESA — acting for the first time on behalf of the EC — is an important step towards the deployment of Galileo and marks a major milestone in the cooperation between the EC and ESA.

Meanwhile, responsibilities for the Galileo program are being reconfigured within the EC. The three satellite navigation units currently under DG-TREN with Fotis Karamitsos as director and Ruete as director-General, are moving from DG Transport to DG Industry and Entrepreneurship (DG-ENTR), headed by Director-General Heinz Zourek and Georgette Lalis as director.

The Galileo-related units are G3, infrastructure, deployment and exploitation, headed by Paul Verhoef; G4, applications and intelligent transport systems (ITS), headed by Edgar Thielman, and G5, legal and financial aspects, where Karamitsos served as acting head of unit.

Because Tajani is becoming the vice-president/commissioner in charge of industry and entrepreneurship, the Galileo program is, in effect, following him, which will ensure continuity in its political guidance. The rconfiguration may also create some synergies with the space policy and GMES parts of DG-ENTR.

The administrative move is taking place as of February 1 and the physical move to the building of DG ENTR will take place within a few weeks or months.

For the space segment, Berry Smutny, CEO of OHB-System AG (Germany), signed the first work order covering the manufacture of 14 satellites, with delivery of the first satellite in July 2012, followed by two satellites every three months.

For launch services, the contract — signed by Jean-Yves Le Gall, Chairman and CEO of Arianespace — covers the provision by Arianespace of five Soyuz launchers with an upgraded Fregat upper stage, to be launched from Europe’s Spaceport in French Guiana, each placing two satellites in their final orbit. They will be launched in pairs starting in December 2012.

Arianespace will also launch the first four operational satellites in the constellation, within the scope of the In Orbit Validation (IOV) program, from the Guiana Space Center, Europe’s Spaceport in French Guiana, starting at the end of 2010.