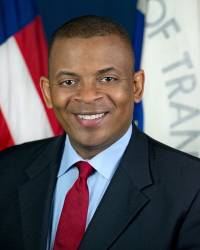 This technology would improve safety by allowing vehicles to "talk" to each other and ultimately avoid many crashes altogether by exchanging basic safety data, such as speed and position, 10 times per second.

This technology would improve safety by allowing vehicles to "talk" to each other and ultimately avoid many crashes altogether by exchanging basic safety data, such as speed and position, 10 times per second.

V2V communications can provide the vehicle and driver with 360-degree situational awareness to address additional crash situations — including those, for example, in which a driver needs to decide if it is safe to pass on a two-lane road (potential head-on collision), make a left turn across the path of oncoming traffic, or in which a vehicle approaching at an intersection appears to be on a collision course. In such situations, V2V communications can detect threats hundreds of yards from other vehicles that cannot be seen, often in situations in which on-board sensors alone cannot detect the threat.

"Vehicle-to-vehicle technology represents the next generation of auto safety improvements, building on the life-saving achievements we’ve already seen with safety belts and air bags," said U.S. Transportation Secretary Anthony Foxx. "By helping drivers avoid crashes, this technology will play a key role in improving the way people get where they need to go while ensuring that the U.S. remains the leader in the global automotive industry."

DoT research indicates that safety applications using V2V technology can address a large majority of crashes involving two or more motor vehicles. With safety data such as speed and location flowing from nearby vehicles, vehicles can identify risks and provide drivers with warnings to avoid other vehicles in common crash types such as rear-end, lane change, and intersection crashes. These safety applications have been demonstrated with everyday drivers under both real-world and controlled test conditions.

“Our latest research estimates that V2V has the potential to help drivers avoid or mitigate 70 to 80 percent of vehicle crashes involving unimpaired drivers, and that could help prevent many thousands of deaths and injuries on our roads every year,” said David Friedman, acting administrator of NHTSA.

The DoT announcement drew early support from the Intelligent Transportation Society of America (ITS America), which has worked with NHTSA and the transportation agency to test and evaluate the advanced driver assistance systems, which draw on GNSS and other in-vehicle positioning sensors to calculate and communicate real-time locations.

“This announcement represents a significant step forward in advancing the next generation of vehicle safety and automotive innovation, and is the result of years of collaboration between the transportation and high-tech industries and our federal, state and local partners,” Scott Belcher, ITS America president and CEO, who called it “a safety leap exceeding even seat belts and air bags.”

“This promises to significantly reduce the number of deaths and injuries on our nation’s roads while unleashing a new wave of innovation from advanced traffic management systems and smart mobility apps to real-time traffic, transit and parking information,” he added. “We look forward to working with U.S. DoT, the automakers, and high-tech industry to ensure that issues such as security and privacy are addressed as we work toward full scale adoption of this life-saving technology.”

A Government Accountability Office (GAO) report on intelligent transportation system (ITS) technologies released last November identified concerns about GPS accuracy and relative positioning that could limit its use in V2V systems. But DoT officials responding to the GAO study expressed confidence that the quality of GPS receivers in today’s automobiles will be sufficient to support V2V safety applications.

The safety applications currently being developed provide warnings to drivers so that they can prevent imminent collisions, but do not automatically operate any vehicle systems, such as braking or steering. NHTSA is also considering future actions on active safety technologies that rely on on-board sensors. Those technologies are eventually expected to blend with the V2V technology.

NHTSA issued an Interim Statement of Policy in 2013 explaining its approach to these various streams of innovation. In addition to enhancing safety, these future applications and technologies could help drivers to conserve fuel and save time.

V2V technology does not involve exchanging or recording personal information or tracking vehicle movements. The information sent between vehicles does not identify those vehicles, but merely contains basic safety data. In fact, the system as contemplated contains several layers of security and privacy protection to ensure that vehicles can rely on messages sent from other vehicles and that a vehicle or group of vehicles would be identifiable through defined procedures only if there is a need to fix a safety problem.

In August 2012, DoT launched the Safety Pilot "model deployment" in Ann Arbor, Michigan, where nearly 3,000 vehicles were deployed in the largest-ever road test of V2V technology. DoT testing is examining interoperability of V2V technology among products from different vehicle manufacturers and suppliers and has demonstrated that they work in real-world environments.

In driver clinics conducted by the Department prior to the model deployment, the technology showed high favorability ratings and levels of customer acceptance. Participants indicated they would like to have V2V safety features on their personal vehicle.

"V2V crash avoidance technology has game-changing potential to significantly reduce the number of crashes, injuries and deaths on our nation’s roads," said Friedman. "Decades from now, it’s likely we’ll look back at this time period as one in which the historical arc of transportation safety considerably changed for the better, similar to the introduction of standards for seat belts, airbags, and electronic stability control technology."

NHTSA is currently completing its analysis of the data gathered as part of its year-long pilot program and will publish a research report on V2V communication technology for public comment in the coming weeks. The report will include analysis of the Department’s research findings in several key areas including technical feasibility, privacy and security, and preliminary estimates on costs and safety benefits.

NHTSA will then begin working on a regulatory proposal that would require V2V devices in new vehicles in a future year, consistent with applicable legal requirements, Executive Orders, and guidance.

DoT believes that the signal today’s announcement sends to the market will significantly enhance development of this technology and pave the way for market penetration of V2V safety applications.

"We are pleased with the direction NHTSA is taking in terms of V2V technology," said Greg Winfree, assistant DoT secretary for research and technology. "The decision to move forward comes after years of dedicated research into the overwhelming safety benefits provided by a connected vehicle environment."

NHTSA has worked in close partnership in this research both with other DOT agencies, including the Office of the Assistant Secretary for Research and Technology and the Federal Highway Administration, and with several leading auto manufacturers and academic research institutions, who have invested significant resources into developing and testing V2V technology.