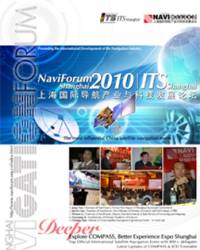 [updated July 10 ] Shanghai NaviForum, the event  that introduced China’s Compass (Beidou-2) GNSS sytem to an international audience in 2007, returns September 1-3 against the backdrop of a multi-billion dollar World Expo.

[updated July 10 ] Shanghai NaviForum, the event  that introduced China’s Compass (Beidou-2) GNSS sytem to an international audience in 2007, returns September 1-3 against the backdrop of a multi-billion dollar World Expo.

Recent statements by Chinese officials associated with the Compass/Beidou program suggest that a draft of the crucial ICD – interface control document – might be released publicly about the time of the NaviForum.

The  theme of the event is "New Generation GNSS & Innovative
Navigation Technology Application." It will open on the morning of September 1 with a speech by the "leader in charge" of the Compass/Beidou system. Tony Russo, director of the U.S. National Office for Space-Based Positioning, Navigation and Timing will also speak.

High-ranking officials from the two key civil agencies responsible for Compass — the China Ministry of Science and Technology and the State Bureau of Surveying and Mapping — are also expected to address the opening session.

An afternoon panel will cover Chinese government policies on civil use of the system and its synchronicity with GPS and Galileo, according to the conference website’s draft agenda.

Event organizers reported recently that China’s military establishment has confirmed its intention to become an official partner of NaviForum 2010 for the first time, reflecting full commitment of a crucial player in China’s GNSS program to this year’s program. In past NaviForums, military participation was only as a partner for a single program event. They will take part under the name of “China 2nd Generation Navigation System Office.”

Other panels will address the current status and development trend of the satellite navigation and digital navigation map industries in China, real-time  traffic information, and 3D geographic information systems and the “digital city.”

Organized by AutoNavi, China’s largest supplier of navigable digital maps, the symposium will be combined with ITS Shanghai , an international conference and exhibition focusing on intelligent transportation systems. Both events have the backing of key national and regional government agencies as well as industry associations.

The conference and exhibition will be held in the Friendship Hall, Shanghai Exhibition Center, 1000 Yan An Zhong Road.