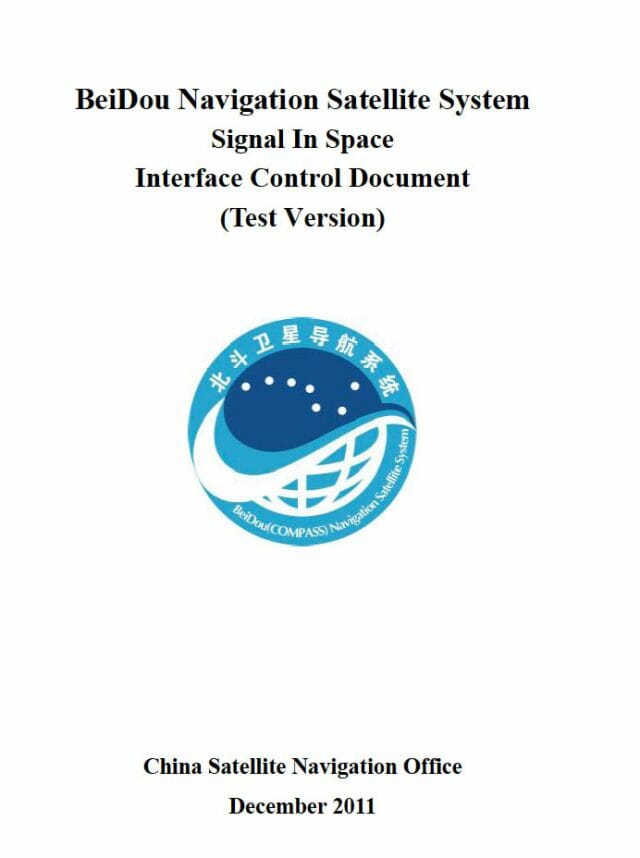 However, the ICD fails to describe the B1 signal’s modulated data, particularly the satellite almanac and ephemeris elements used to compute Compass satellite orbits and clock offsets that are needed in order to incorporate these new signals into the algorithms for determining position and time of receivers, says Pat Fenton, vice-president and chief technical officer for GNSS manufacturer NovAtel Inc.

An English-language version of the document — the BeiDou Navigation Satellite System Signal In Space Interface Control Document (Test Version) — is available on the Compass website here. The ICD contains specifications for the interface between the Compass space segment and user equipment, which will help manufacturers design GNSS receivers that can process the BeiDou-2 signals.

Ran Chengqi, director of the Beidou satellite navigation system management office, along with representatives of the the China Aerospace Science and Technology Corporation and Aerospace Minister Zhao Xiao-chun, made ​​the announcement in the program’s first official press conference in Beijing.

Fenton points out that a team of Stanford University researchers used signals transmitted from the first BeiDou-2 middle Earth orbit (MEO) satellite to determine the BeiDou physical signal structure and PRN code. The results of the Stanford effort was published in the JulyAugust 2007 issue of Inside GNSS.

"This is basically what is described in this Draft version ICD and is mostly old news," Fenton told Inside GNSS.  "The new information that  it does include is the definition of the coordinate system and time scale they intend to use. Hopefully, the final version will include the ephemeris data descriptions."

Compass now has 10 BeiDou-2 satellites operating in its constellation. Another six are scheduled for launch next year, when an initial service is scheduled to begin over China and the east Asia/Pacific region. Completion of the 35-satellite system is currently projected for 2020 (Phase III).

For the time being, China will also retain its BeiDou (Phase I demonstration) active positioning system and short-message communication services that employ geostationary satellites and ground processing/retransmission facilities.

Although the B1 signal is currently a quadrature phase shift keying (QPSK) modulation at 1561.098, a Compass signal and frequency plan presented at the 2010 International Committee on GNSS (ICG) Providers’ Forum states that the Compass B1-C signal will eventually adopt the same multiplexed binary offset carrier (MBOC) modulation centered at 1575.42 — the same as the GPS L1C and Galileo E1 open service signals.