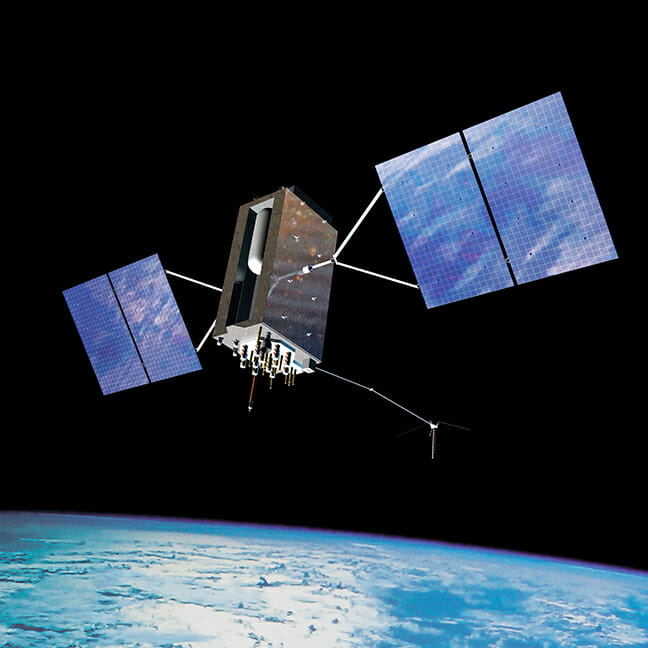 The U. S. Air Force is weighing shortening the design life of the GPS satellites it buys after it finishes filling out the constellation with the final tranche of GPS III spacecraft.

Space Command reached out to the industry late last month asking for feedback on the ramifications of scaling back on the elements that make the GPS space vehicles (SVs) the “Energizer Bunnies” of space — the satellites that just go and go and go.

The U. S. Air Force is weighing shortening the design life of the GPS satellites it buys after it finishes filling out the constellation with the final tranche of GPS III spacecraft.

Space Command reached out to the industry late last month asking for feedback on the ramifications of scaling back on the elements that make the GPS space vehicles (SVs) the “Energizer Bunnies” of space — the satellites that just go and go and go.

"Over time, the demand for higher reliability and more robust SV designs has led to a gradual increase in the SV DL (design life)," the command said in its July 31 Request for Information (RFI). "In an effort to explore all potential options for delivering fiscally responsible mission capability, the GPS Directorate is requesting information on the impacts of reducing the SV DL."

The Air Force does not appear to be looking at changing the design life for its upcoming procurement of GPS III satellites. The request for proposals for that buy is expected to be released before October 1 and involves up to 22 satellites that should all be launched by fiscal year 2033 (FY33). The new RFI involves decisions about the follow-on contract for a total of 24 GPS spacecraft — enough to replenish the constellation — to be delivered between 2035 and 2045.

The GPS satellites are famously sturdy with a number operating long enough, so the oft-repeated joke goes, that they have reached drinking age. There was a time when the Air Force took advantage of that impressive longevity, redirecting money allocated yearly for replacement launches to other programs when the launches weren’t needed.

Shortening the design life makes it possible to lower the total cost to orbit, said one expert, who spoke on condition of autonomy to be able to speak freely.

"If you shorten the life you have a lighter satellite because you can do with fewer (solar) panels,” the expert explained. ‘The second thing, if it’s a shorter life, the amount of fuel that you’ve got to carry on board for constant corrections of the satellite, as well as the amount you need available to you to deorbit it or boost it into a higher orbit, is less as well. And of course, if you’re missing two solar panels the whole satellite weighs a whole bunch less."

Shrinking the satellite in this way could also make launches cheaper — an idea that has been suggested repeatedly in years past. One way to do that, in addition to cutting the number of solar panels and other measures described, is to take the Nuclear Detonation (NUDET) Detection System (NDS) off the GPS satellite bus — another long-standing suggestion for bringing down the cost of the GPS satellites.
The geometry for NDS is such that it does not need to be deployed the way it is currently being deployed.

If you can shrink the satellites such that two GPS space vehicles could be launched on one rocket the cost savings would be substantial.

It’s not clear what sparked the questions about design life at this point in time, but a second person familiar with the program said the inquiries are coming from Washington.

The RFI is rooted in the broader conversation about disaggregation that was sparked by Gen. John Hyten, then the chief of Air Force Space Command, when he released his Space Enterprise Vision (SEV) in April 2016, the first expert said.  Hyten now leads United States Strategic Command.

The SEV addresses ways to protect assets given that space is now a contested domain.  Disaggregation refers to the idea of having more, smaller satellites and not relying on one or two satellites that could be more easily targeted. Though smaller GPS satellites have long been proposed for cost reasons the constellation is inherently disaggregated and has not been a focus of space planners worried about attacks until, perhaps, now.

Smaller satellites will help with the cost, said the first source, but the Air Force usually fails to buy them in sufficient quantities to really capture the potential savings — despite making plans to do so.

With the exception of the IIR satellites, where the Air Force made a deal for 21 satellites, they "don’t build enough of them to amortize," the source said. And the expert does not expect that the next procurement of 22 GPS III spacecraft, which will be announced any day, will be any different.

They’ll never build 21 or 22 GPS III satellites, the expert asserted, because: "there will be a GPS IV and V and VI — all of which are going to be different." The reason is Congress, they said. Whatever the Air Force says about its plans for a 22-satellite buy of GSP III space vehicles "they don’t get funded that way," explained the source. "Congress funds them only for five years."

There was, however, an exception to that — the IIR satellites were fully funded as a group.

"Now if they funded (the Air Force) to buy them all like they did the IIRs," said the expert, "and get them procured in 5 years — that would be different."