A new GNSS receiver for mobile consumer products uses only the modernized, wideband signals at L5, with an acquisition engine to acquire the signals directly and a navigation engine employing artificial intelligence techniques to fully exploit all the signals in L5’s 50MHz-wide band. 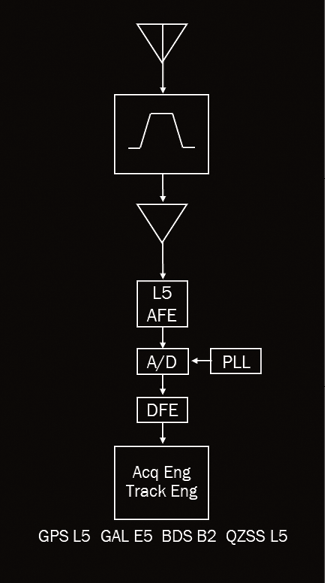 The continual evolution of GNSS capabilities has opened up new opportunities for fast, efficient and accurate mobile positioning. Specifically, the addition of a new frequency broadcast by modernized GPS, Galileo and BeiDou satellites in the 50MHz band centered at 1192MHz (L5, E5 and B2, respectively) supports a dual-band receiver in mobile phones for the longtime L1 and newly arrived L5 signals.

These receivers did not appear in phones until 2019 because of their added size, power, and complexity. These dual-band receivers bring several disadvantages:

• A dual-frequency front end places a huge burden on many phone models, especially with the rise of 5G.

• The L1 band still has reliability issues with jamming and interference but is needed to aid acquisition of L5 signals.

• The receivers only support a single sideband at L5 and do not use the full capability of L5 to further enhance sensitivity, improve accuracy, and mitigate the impact of multipath.

As a result, a group of experienced GNSS engineers envisioned a new generation of receivers for mobile consumer products with these key characteristics:

• A single frequency design that only uses the modernized wideband signals at L5.

Why L5 Is So Important for Consumer Devices

Every GNSS user in every segment benefits from the new, modernized signals in the L5 band. L5 signals are more accurate, more reliable, and are currently available in sufficient numbers to support all user segments. Its major advantages over L1:

Signal structure (narrow correlation peak). GPS L1 has a chipping rate of 1.023 MHz, while the modernized L5 signals have a ten times higher chipping rate of 10.23 MHz. While the correlations peak of L1 covers 293m, an L5 peak covers only 29.3m. This yields inherently more precise measurements and eliminates multipath distortions from any reflection over 29m.

Wide bandwidth (multipath mitigation). With a larger bandwidth, signal observables contain additional information that can be used to determine reflections present in the combined received signal. These reflections can be corrected, and the signals can be used in the solution rather than eliminated. Also, because this receiver’s wide bandwidth captures both A and B channels, it increases resistance to multipath fading since the signals have different fading patterns.

Pilot codes (longer coherent integration). While L1 CA code has a single component with a data bit every 20 milliseconds, the L5 signals have two quadrature components: a data channel with the data symbols and a pilot channel without data symbols. The Galileo and BeiDoiu versions have a second sideband with two more quadrature components enabling a second data and pilot channel. Since these pilot channels have no data bits, they enable longer coherent integration which greatly enhances the sensitivity of the receiver. Combining these multiple components also provides additional sensitivity in acquisition mode.

Multiple signals with common structure. When the L5 signals were being defined by different countries across the globe, international discusions led to a relatively common baseline across all systems that eliminates the hardware and software complexity in L1 receivers where each system required its own digital processing core.

Stronger signal transmission. The satellites transmitting L5 signals are far more power efficient due to better solar arrays, larger batteries and significantly improved transmitter efficiency. Power can be used to transmit additional signals and at higher power while still conforming to international coexistence requirements. Each component of the modernized signal can be at least 0.5dB stronger than L1 CA, and the combination of all four components can be 6 dB stronger. This produces faster acquisition times and better coverage in dense urban environments.

Lower bit error rate and cross correlation. Modernized signals use a much more robust system of convolutional encoding that adds more robustness to error detection and the ability for error correction. Modernized signals also added a secondary code to ensure that the correct satellite is being detected and not cross-correlated with another satellite with a much stronger signal. This reduces cross correlation by more than 13dB.

Cleaner band. The L5 band is centered 400MHz lower than L1 in the heart of the Aeronautical Navigation Radio Services band, which is protected worldwide for navigation purposes. No communication bands to cause interference are present, nor can they ever be added.

Signal availability. 66 satellites now transmit operational signals in the L5 band. With BeiDou and Galileo, there are more than enough L5 satellites today, and more GPS III satellites are being launched regularly.

Why Not Use a Current L1/L5 Solution?

L1/L5 solutions, now starting to appear in smartphones, could actually have a negative impact.

Extra receive chain. A dual-band solution requires a second, separate RF receive chain for each band, two antennas and an extra set of amplifiers and filters: space, power and cost at the handset level. Since the L5 measurements are more accurate, many receivers turn off L1 to save power in tracking mode. Why incur the size, cost and power of L1 just for acquisition?

Interference and Jamming. The L1 band has significantly more issues with interference and jamming due to harmonics, as previously stated. If the L1 signal cannot be acquired, then the receiver cannot use that information to acquire the L5 signals. The L5 band is a protected band worldwide for navigation and there are no nearby interferers such as Ligado.

No benefit to navigation accuracy. Because the L5 signals are stronger and more accurate, once they are acquired, there is no need to use the L1 signals, which degrade accuracy, in the navigation solution.

A pure L5 solution can provide all of the benefits of L5 without the downsides of L1. Less is more. We made several the key innovations to build this product.

Since the codes are 10X longer and have a 10X faster chipping rate, it’s a 100X more difficult search problem. We created an engine optimized for that problem without using 100X more silicon or 100X more power by developing a customized array processor that uses a more GPU-like approach. It maintains TTFF without an oversized engine or assistance from L1.

This eliminates the need for a second RF chain. Furthermore, since all L5 signals are interoperable, the DSP architecture can be harmonized. Rather than having independent correlation engines, our L5 engine uses common hardware (the customized array processor) for signals from all GNSS systems. This provides flexibility in implementation.

The L5 signal structure allows for increased sensitivity for both acquisition and tracking. In acquisition, combining multiple components from both sidebands increases total signal energy resulting in improved sensitivity. In tracking, the pilot channel allows for longer coherent integration to maintain signal lock in difficult environments including enhanced resilience from fading. Since the receiver’s architecture is wideband, all parts of the L5 signal can be combined for maximum performance. Significantly more signal strength comes off the satellite in L5 and the L5 signals appear stronger.

The L1 signal structures are outdated. They do not have the longer primary codes and the secondary codes like modernized signals on L5 that mitigate many of the reliability problems associated with cross correlation, jamming and spoofing. In difficult conditions, using these unreliable signals can cause the L1 acquisition to take longer and produce incorrect results.

• The L5 signals are inherently more accurate and hold more information in the full bandwidth. The Galileo and BDS signals have both an A and B channel which when used together produce significant improvement in tracking sensitivity as well as improved measurement accuracy.

• Using the full bandwidth allows a more sophisticated channel estimation than a simple pseudorange measurement that is common in other receivers. The L5 receiver determines a representation of the full channel impulse response (CIR) using unique signal processing of the satellite signal, which allows better multipath correction by the navigation engine.

• We gain advantages from channel diversity as well. The multiple signals in L5 are separated by about 30 MHz which provides further resilience against multipath, especially at low speeds common for pedestrians.

• The enhanced measurements are processed by a cloud-connected navigation engine that uses advanced AI/ML techniques to further improve navigation accuracy. The inference engine and navigation algorithms that produce the final navigation output run on the mobile device, while the learning engine resides in the cloud. This enables the mobile device to operate even when temporarily disconnected from the cloud.

• The navigation engine uses sophisticated ML techniques to predict if the received signal is line-of-sight, and predict the measurement error caused by multipath. These techniques require the extra information contained in the CIR and the correlation function from the measurement engine. Combined with data from building models, the propagation model of the urban canyon can be learned and used to resolve multipath and improve positioning accuracy. The Cloud service uses this model to allow reflected signals to be used correctly in the navigation solution rather than being excluded due to their multipath content.

The pure L5 receiver was designed from the beginning by oneNav as a licensable IP core rather than a discrete silicon solution. A complete solution includes all the firmware and an RF front end reference design from antenna to A/D converter. This allows customers to determine how to best bring the pure L5 advantages to their products.

Paul McBurney is co-founder and CTO of oneNav and Greg Turetzky is the VP of Product at the company.