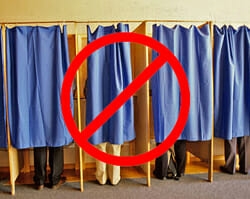 The 2011 USA Challenge will give ION GNSS participants a chance to pick their favorite satellite navigation application from this year’s contest using eVotz, a mobile voting platform that won the competition last year.

The 2011 USA Challenge will give ION GNSS participants a chance to pick their favorite satellite navigation application from this year’s contest using eVotz, a mobile voting platform that won the competition last year.

Elliot Klein of New York developed eVotz to verify voter’s identities and location via a secure, mobile platform for location-enabled smartphones or tablets.

"eVotz is a better way to authenticate voting without paper, pencil, postage or traveling by car to polling locations and we do it using emerging mobile device Internet and hybrid GNSS technologies," Klein said.

Five finalists will introduce their GNSS application and location-based service ideas in "fast pitch" presentations on Thursday, September 22, at 12:30 p.m. in the Portland, Oregon Convention Center where ION GNSS 2011 will be held. The USA Challenge 2011 competition was organized by Inside GNSS magazine and cosponsored by NovAtel, Inc., and the Institute of Navigation.

ION participants inside a virtual "geofence" within and around the convention center may use eVotz to select their favorite of the final five ideas. The winner will receive a bronze People’s Choice award at the Thursday event.

Here’s how it works: ION participants use their location-capable smartphone or other wireless device that takes them to an interactive voice option menu. Depending on the device features, they may be able to access the site by scanning a QR code. If they opt-in to receive SMS short code messages and hyperlinks, they’ll be able to cast a vote for their favorite USA Challenge finalist.

Klein said, "We apply the eVotz ‘secret sauce’ that verifies the voter’s location. We test it against the geofence–permitted postal mailing address radius to the Portland Convention Center area and confirm that it matches. eVotz allows a one-time vote and also matches the vote with other permissions in the eVotz server."

As part of his award last year, Klein received support in developing his platform from the Position, Location And Navigation (PLAN) group at the University of Calgary. Klein said PLAN’s faculty helped him realize the potential of mobile phone sensors, including GPS and A-GPS, and using data from self-contained magnetometer, altimeter, or gyro sensors to authenticate geographical location. It was particularly useful for indoor locations, where people are most likely to use a smartphone or tablet, he said.

The USA Challenge is part of the European Satellite Navigation Competition, now a global event with competitors in 50 countries.