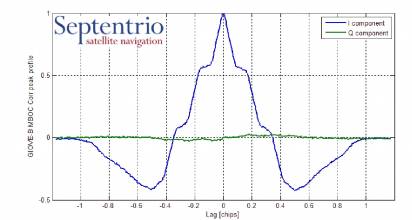 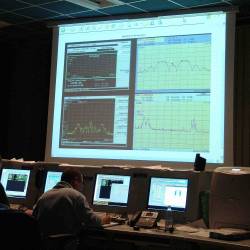 A screen in the Galileo control room displays the spectra of signals received from GIOVE-B shortly after the spacecraft began transmitting navigation signals. ESA photo.

Built under a cooperation between the European Space Agency (ESA) and European Union (EU), GIOVE-B was launched April 27 from the Baikonur cosmodrome in Kazakhstan. The MBOC signal design will be used by the future GPS L1C broadcasts as well as the Galileo Open Service in accordance with an agreement drawn up in July 2007 between the EU and the United States.

Locked to an on-board passive hydrogen maser clock, the GIOVE-B signals will help improve positioning accuracy in challenging environments with multipath and interference as well as better penetration for indoor navigation. 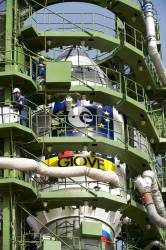 Close up view of the payload fairing of the Soyuz-Fregat launcher carrying ESA’s GIOVE-B satellite, on the launch pad in Baikonur, Kazakhstan, prior to the April 27, 2008, launch. ESA photo by S. Corvaja

Riding a Soyuz/Fregat launcher, the 500-kilogram (1,100-pound) spacecraft lifted off at 12:16 a.m. Central European Summer Time (CEST). The Fregat upper stage performed a series of maneuvers to reach a circular orbit at an altitude of about 23,200 kilometers inclined at 56 degrees to the equator. The two solar panels that generate electricity to power the spacecraft deployed correctly and were fully operational by 5:28 CEST.

The European space Agency (ESA) operational schedule called for Galileo signals at three L-band frequencies to begin transmitting within seven to eight hours after reaching orbit, according to Giuseppe Viriglio, ESA’s director of telecommunications and navigation. 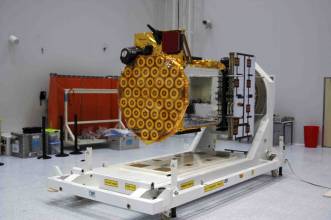 GIOVE-B, the second Galileo in-orbit validation satellite, has arrived safely at the Baikonur Cosmodrome in Kazakhstan, where it is undergoing pre-flight checks in preparation for its launch early on April 26.

After completing final tests at the European Space Agency (ESA) space technology center in Noordwijk, The Netherlands, the spacecraft was transported to Baikonur aboard an Antonov An-124 cargo aircraft.